Unitas forges her path and keeps the family’s legacy

Her grandfather, the late Johnny Unitas, was a Hall of Fame quarterback for the Baltimore Colts from 1956 to 1972. In 2004, The Sporting News ranked him number one among the NFL’s 50 Greatest Quarterbacks. He held the record for most consecutive games with a touchdown pass for 52 years until 2012.

Unitas was the type of man who would never turn away a fan seeking an autograph, especially children. He founded the Johnny Unitas Golden Arm Educational Foundation, along with his 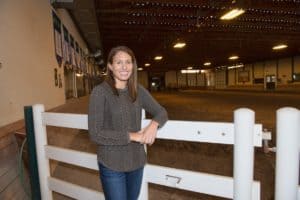 son, John Unitas, Jr., who is Jillian’s father. The foundation awards the Golden Arm Award every December to the most outstanding college quarterback who exemplifies the character of Johnny Unitas on and off the field. The foundation also awards grants to deserving high school athletes who want to play in college but lack the financial resources to do so.

Jillian Unitas continues her grandfather’s philanthropic efforts and shares his passion for making a difference. She found her way from Baltimore to Indianapolis by way of her work in the racing industry. After graduating college, she was hired by Andretti Sports Marketing to assist with the PR and marketing of the Baltimore Grand Prix. There she had a chance encounter with Anderes Krohn, a former Indy Car driver, who took Unitas and her co-worker for a spin in a pace car as part of the pre-race festivities.
After the Baltimore Grand Prix, Unitas accepted a full-time position with Andretti Sports Marketing that is headquartered in Indianapolis. Unitas’s first race with the company and team was in St. Petersburg, Florida. In an act of fate, Unitas and her co-worker were dining at a restaurant when Krohn appeared. Unitas’s colleague was a friend of Krohn and made the proper introductions. Unitas explained that she had met him in Baltimore when he drove her in the pace car though the two never exchanged words. One thing led to another, and Unitas and Krohn were recently married in the fall of 2016.

The couple have each made career changes better suited to married life. Unitas, whose previous position required frequent travel, decided that she was ready to establish roots in Indianapolis and become more engaged at the local level.
She is currently a manager at Just Marketing, Inc. and continues to work with local drivers on their PR and branding. Her husband co-owns a company that mentors and promotes young, up- and-coming drivers such as Stefan Wilson, a rookie who made his debut at the 100th running of the Indy 500. Krohn, who is Norwegian, used to work with children with special needs back in Norway. He researched organizations in the greater Indy area that he was interested in volunteering with and discovered Children’s TherAplay in Carmel, Indiana. 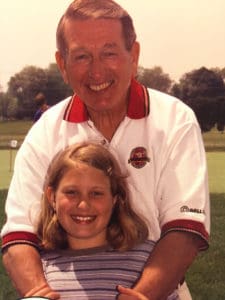 Colts Hall of Famer Johnny Unitas
and his granddaughter, Jillian.

The Children’s TherAplay Foundation is a not-for-profit pediatric outpatient clinic that serves children with special needs. It is one of the few clinics in the country dedicated to providing physical and occupational therapies on horseback. The foundation’s therapists combine a sensory-rich, child-centered clinic with hippotherapy – the movement of horses – to provide carefully graded motor, sensory, and neurological input. In 2001, Children’s TherAplay became a not-for-profit organization on the grounds of Lucky Farms.
In the ensuing years, Children’s TherAplay’s founder Craig Dobbs and other caring individuals helped expand not only the facility, building the therapy clinic and administrative offices they still use, but also the program. It offers pediatric physical and occupational therapy to nearly 150 children each week. Any child who needs physical and/or occupational therapy may be eligible to receive therapy at Children’s TherAplay.
The board of directors for Children’s TherAplay invited Krohn to join their board and become the organization’s spokesperson. Unitas joined her husband at the events, and it wasn’t long before she was asked to join him as a board member.

“We were honored and means so much to us that the board asked us both to join the organization,” Unitas said. “I enjoy graphic design and enjoy lending my skills by creating invites, tee-shirts, brochures and so forth, and Anders and I enjoy attending the events for Children’s TherAplay. My grandfather and Dad both loved children so having grown up watching and learning from them, I am inspired to carry on that work in honor of my grandfather.”
Shannon Wade, Marketing Programs Manager for the foundation, spoke about Unitas and her husband’s contributions and dedication to the organization. “They bring caring and are helping us to meet new people and make new friends. Jillian is also the reason why we were able to purchase Thor, a new therapy horse that is currently in pre-training. Thor is a magnificent Norwegian Fjord horse. Now Jillian has two Norwegians in her life!” Wade said.
Thor will join the rest of the therapy horses when they are moved over into a neighboring barn while the existing one is demolished to clear the space for the new Phil and Sharen Meyers Stable. The new facility will provide additional stalls, a heated indoor bathing station, laundry facilities, abundant hay storage and an additional paddock along with other amenities for the staff and families that Children’s TherAplay serves.

“As a small nonprofit, we depend so much on the community,” Wade stressed. “People-power makes just as much difference as the financial donations that impact us. That’s one of the things that Jillian and Anders have brought. Jillian has done so much design work for us (pro bono) and has brought the racing community to us. At the Horsepower 500 this past year, one of the big hits for our children was that they got to see and touch an Indy 500 car. Jillian brought them that. Together, she and Anders are a super power.”