The Center’s Community Engagement Manager, Julia Shildmyer- Heighway, has been building its catalog of educational and outreach program since she arrived in 2015. She has developed programs such as the Palladium PALS (performing arts literary season) Book Club that encourages students to read books aligned with Center Presents performances and earns them a free ticket to a show. The Palladium Bookies, a group that meets every other month, is dedicated to books about performing arts. These programs are only two examples of the Center’s literacy initiatives that span babies to seniors.

“We started the Palladium PALS last season,” Shildmyer-Heighway said. “The children read books that align to the shows in our season. For example, our jazz pairing was a book written by 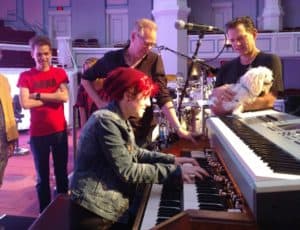 jazz trumpeter Arturo Sandoval. Every program is connected to the performing arts. I am big on cross-curricular connections. We have programs that are language arts, science and geography focused but are integrated with the arts.”
Musical Images of Indiana is a live, interactive videoconference where students actively engage in examining songs about Indiana and by Hoosier songwriters. The students discuss how lyricists incorporate the use of metaphor, simile, and hyperbole. Made possible by grant funding, this signature project of the Indiana Bicentennial Commission is free to any Indiana fourth-grade class.

“Some of our programs align with the standards for Language Arts Social Studies, Science, and Math,” Shildmyer-Heighway explained. “Our Science of Light and Sound reinforces the terms taught in the classroom through real-world application. You may have a student who loves performing arts but doesn’t do well in math, but if they see how it connects, and they can make that real-world connection, then it starts to make a little more sense to them.”

The Center’s Firestone FrontRow gives high school and college students with special interest in the genre the unique access to Center Presents performers. Students sit in on the sound check and rehearsal and then engage in Q & A with the performers followed by dinner and tickets to the performance.
“Wynonna Judd was so great,” Shildmyer-Heighway exclaimed. “She was changing the songs and instruments up; it was a true rehearsal. Afterwards, she got the kids up on stage with her and talking with her. She really went into the details of her life and gave them meaningful advice. These experiences are always so wonderful.”

The Preshow Experiences are one way that the Center connects with and promotes the talented youth from our own Indiana communities. The Master Classes & Residencies further study the art that they learn directly from world-class Center Presents performers in a classroom/studio setting.

The Koresh Dance company instructed a hip-hop class with some IPS students. Later that night, they drove with Shildmyer-Heighway to Frankfurt, Indiana, and did a master class with a dance company, The TAP Academy, whose students represent all four school districts in Clinton County. “This is just an amazing opportunity for our students,” said Tap Academy owner Lynne Brinkley. “This is an international company, and their choreography is cutting edge. This is not something I could even dream of doing without our partners at the Center for the Performing Arts.” Brinkley’s students – about 18 young ladies ages 8 to 16 – later came to Carmel to catch the company’s Friday night performance at the Tarkington theater, which also included a post- performance Q&A. 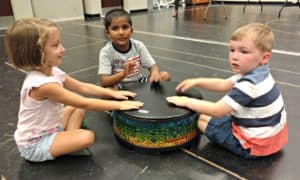 “The TAP Academy received tickets to come down the next night for dinner and watch the Koresh Dance Company perform,” Shildmyer-Heighway said. “During their time with us, the Koresh Dance Company also spoke at the Hasten Hebrew Academy and then came back to Carmel where they instructed a Master Class with the students at the Gregory Hancock Dance Theatre.”
The Scene is another outreach program designed for young professionals. Other outreach programs include, but aren’t limited to, the Luminaries-a dynamic women’s group, group vocal coaching, Classics in Context that is complimentary to ticket holders and is a pre-concert lecture that provides an insider’s perspective on the works being performed at the Center’s classical performances.

New this year is the Intro to Stand-up comedy class. The instructor, Mat Alano-Martin, is the co- founder of the Limestone Comedy Festival and a full-time touring comedian performing at clubs, colleges and festivals across the country. He has appeared on The Bob and Tom Show, Laughs on FOX and his debut album “Profiled as Such” can be heard daily on Sirius/XM. This class looks at the history and evolution of stand-up comedy and offers a practical course covering joke mechanics and writing for stand-up as well as performance theory and practice.
During the class, students write and practice a five-minute routine, which they perform for friends and family at the graduation show. This class is recommended for ages 17 and up.

“So many cultures around the world incorporate the arts into their everyday life,” Shildmyer- Heighway concluded. “Art is not a separate thing that you go do. It is part of your life whether it is performing arts or visual arts. It seems that in our communities, we’ve kind of divorced the arts from everyday life. I think that these outreach and education programs make it more

accessible to anyone who is interested. We want everyone to know that they are welcome. The hope is to show even novices that the arts can be part of your life, and that they will enrich your life with beauty, joy and depth. It is about embracing the human experience and getting all that you can out of life.”

For more information on any of these programs and for a complete list of available programs, email Outreach@TheCenterPresents.org.