But that red kettle that appears out of nowhere each November is different, not just because of its history, but also because the impact it has on our community lasts long after decorations come down and snow melts.

The Salvation Army, which was founded in London, England in 1865, had made its way to America by 1880. In cities across the country it began serving the poor, the homeless, the hungry and the forgotten. A Salvation Army officer, Captain Joseph McFee, was stationed in San Francisco in the fall of 1891 when he found himself on the losing side of a battle against epidemic hunger among residents of his city. An idea bloomed to raise enough money to provide a hot Christmas dinner for 1,000 people who would otherwise go hungry. After much prayer and thought, he decided to try something he had once witnessed in Liverpool England, where a large iron kettle was set out on a dock at Stage Landing so that merchants coming and going could toss in a coin to help the poor.

The next day Captain McFee traveled down to Oakland Ferry Landing with a large soup pot and a sign that read “Keep the Pot Boiling.” The spur-of-the-moment 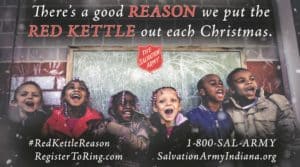 campaign was so successful that Captain McFee was able to turn his dream of a Christmas dinner for a thousand into reality. Within a decade the soup kettle idea had spread across the country, launching a tradition that continues today with more than 25,000 Red Kettles supporting local Salvation Army programs.

In central Indiana, volunteer bell ringers give the gift of time by standing with a Red Kettle and encouraging their neighbors to help support The Salvation Army. In just two hours, these volunteers can raise enough funds to feed a family of four for three days, or enough to shelter a woman fleeing domestic violence for two. Everyone has their personal reason for volunteering as a bell ringer or dropping change in a kettle. One person may remember getting Christmas gifts from The Salvation Army as a child. Another may have a friend who overcame addiction at the Indianapolis Harbor Light Center. These reasons are shared on social media as part of the growing #RedKettleReason movement. Supporters can even create their own peer-to-peer crowdfunding page at RedKettleReason.org to support this annual fundraising effort of The Salvation Army.

When you walk by a Red Kettle this year, take a moment to look back in time to Captain McFee with his iron kettle and 1,000-person Christmas dinner. The kettle may look a little different, but its purpose remains the same. The bell ringer who stands in the cold with a smile and a “Merry Christmas!” on his lips is standing there because his efforts last year helped to serve more than 468,000 meals to families right here in central Indiana. That trio of 5th-grade girls wearing antlers, singing carols off key and ringing with all their might? They are making sure that The Salvation Army can provide more than 113,000 nights of shelter to people in need next year. That’s why they ring. It’s their #RedKettleReason. What is yours?