The city’s projected timeline is to have it ready to entertain residents and visitors by the first of November 2017 and have it open until mid-March or the end of February, weather depending. There is a great deal of planning and designing that is underway with many factors to consider, including how to power the mechanism that keeps the ice frozen in an environmentally-sound way. Mayor Brainard explained that there will be a generator specific for the ice rink that will likely be housed approximately 300 feet from the intended skating rink site, in the parking garage at City Center.

“We have to plan this very carefully how it’s all going to work,” Brainard emphasized. “We want the generator to be properly vented and to be powered by a clean fuel source so as not to pollute the area. We have also researched machines that will keep the ice smooth and clean. The traditional Zamboni machines do not have shocks which would be problematic over time if we stored in the garage and drove it over hard surfaces. We have found another company that builds an alternative and that are electric.”

The Mayor went on to explain that they have been researching how the city will handle the skate rental concession, most likely partnering with a third-party vendor. The city is also considering food and hot beverage concessions that will be able to lease space near the rink.
“We are looking at a variety of designs for a fire pit installation so that people can sit or stand around to get warm,” Brainard said. “It will be fueled by natural gas, which is the least expensive and least pollutant option. We also have to consider what type of barrier will be built around the ice to keep skaters and the observers safe. Then when the season is over and we have to think about what to do with the area underneath when we remove the ice rink. We’re looking at installing a porous pavement that will allow water to drain through it so that drainage doesn’t become an issue. We’re also discussing how we use that space in the summer. We have a lot of requests to put tents up on it. We have an underground sprinkler system that we have to contend with, so it’s important that we look at building a tenting system that will be owned by the city. For a fee, the space can be leased out for weddings or private groups that will be installed and removed by the city’s staff.”

He went on to explain that this will also create more space for the Farmer’s Market. With the additional hard surface, dancers and musical acts will have more 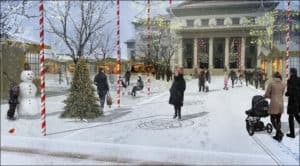 room to exhibit. It provides more options for the market in general.
“Whatever we do, we want to design it carefully and with great care so that it enhances the area in front of the Palladium,” Brainard said. “I see the Center Green as the city’s living room. We want it to be vibrant and to be used as the center of interaction of between people in our community. At the same time, we want it to look very special and beautiful.”

The mayor has decided to include a Germanic tradition by including a Kris Kringle Market, a holiday market with wooden huts decorated in fresh greenery that sell handmade crafts and other unique items. The markets are traditionally set up throughout many towns and villages in Germany, France and other neighboring countries. Patrons are able to purchase and enjoy traditional mulled wines, Gluehwein, and the seasonal favorites. The mayor explained that the vendors will be juried by a non- profit committee that will be established and will likely be made up of local German and Austrian immigrants who live in Carmel and have volunteered to offer their input and experience with such markets. The mayor has also been engaged in conversations with the board members of a very popular and authentic Kris Kringle Market in Chicago.

“This year’s progress includes the installation of the city’s 100th round-a-bout,” he enthused. “This brings national and international attention to Carmel. Cities always grow and change throughout history. We are much closer to being built out than we were a decade ago. If I had to put a percentage on the realistic projects that I would like to see completed in Carmel during my time, I’d say we’re at 85-90% of completion as we wind down 2016.”