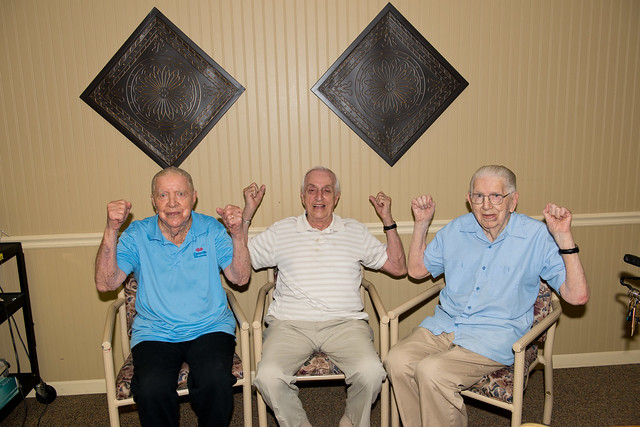 If you combine the ages of these three World War II veterans, you arrive at a staggering number. They have piled up an inspiring 284 years of life.

Indeed, Englehardt, Hallagan and Bertalon could be the poster children of the country’s Greatest Generation. Having survived the zealous antics of Hitler, Mussolini and Tojo, the three are now in the twilight of their lives at the American Senior Community’s Zionsville Meadows.

But each has aged with distinct appreciation for where he has been and where he is today.

“We were all lucky to come back in one piece,” said Hallagan, who was in a combat regiment in the North African, Italian and southern French theatres.

And they are fortunate to be members of a dwindling club – former World War II servicemen who are still living. Of the 16 million American service personnel who served in the global conflict in Europe, northern Africa and the Pacific, less than 800,000 remain. The median age is 92, and over 500 die each day. Just 30 years ago, there were over 10 million survivors.

Thus, there has been a strong rush by central Indiana supporters and sponsors of the Indy Honor Flight program that takes veterans and guardians to visit Washington, D.C., the World War II monument and other patriotic sites. Englehardt, Hallagan and Bertalon were among 200 veterans who were part of the April journey.

“These men and women are walking history books,” noted volunteer Carolyn Schmidt to WTHR after the trip. “It’s really such as honor to be with them. Once you are there and see their faces, it is priceless. These men really sacrificed for us. The least we can do is spend a day with them and make a trip of a lifetime.”

All three echoed their gratefulness for the voyage to Washington, D.C. “It was something,” said Bertalon, a former real estate agent on the west side of Indianapolis. “It was fast and furious. We were all over the place.”

The stops included Arlington National Cemetery, where Bertalon, a Navy veteran in the Pacific War, remember poignantly that there were “acres and acres” of gravestones dedicated to fallen United States servicemen.

For Englehardt, the trip was an exclamation mark to his military career. He served in the 565th Signal Company 65th Infantry Division. The division saw 55 days of combat in the Rhineland and central Europe branch. The Americans suffered 2,412 casualties and 261 deaths during those battlefield days.

“I shot at Germans, and Germans shot at me,” said Englehardt, an Indianapolis Tech graduate who was a television technician in his second chapter of life. “I think I did something to help the cause.”

He, too, was impressed with the tour of Washington, D.C.

“I was very happy,” he said. “I didn’t think I would get to see those things.”

Due to a political decision by the Americans and British, Englehardt and his division weren’t part of the final Nazi defeat in Berlin (the Russians were the authors of that last chapter of fighting). However, his group did get an upfront view of an iconic Nazi landmark. They arrived at Hitler’s vacation home, the Berghof in the Bavarian Alps, after British bombers blasted the building and area.

Hitler used the setting to host his partner, Eva Braun, and meet with compatriots such as Albert Speer, Heinrich Himmler and Joseph Goebbels. World leaders such as Neville Chamberlain of Great Britain met with Hitler at the spacious and luxurious Berghof prior to the war.

“The windows were blown out,” he recalled. “The Nazis tried to burn it down, but it was still there.”

For Hallagan, who retired from L.S. Ayres after a long career, said returning to Germany as a tourist and father was a major part of his recovery from the war. He has visited Germany five times.

“I love Germany,” said Hallagan, whose son was stationed in Germany during his military service. “The people are fabulous.”

But on one trip to Germany, Hallagan had to pass on one side trip. He travels to Munich, Berlin, Stuttgart and the Rhineland were exceptional for the veteran. But he declined an opportunity to tour the Dachau concentration camp where over 30,000 prisoners perished under the ruthless Nazi rule.

His first visit to the camp was in 1945, just two days after the Allies had liberated the site.

“I just couldn’t go through it,” admitted Hallagan.

Sadly, Hallagan sees some of the same challenges in today’s world. He worries that the Muslim radical group ISIS is taking the same footsteps that Germany and Japan did over 70 years ago.

“If we don’t stop them, it will be terrible,” stated the veteran. “They have no sense for life.”

For Englehardt, Hallagan and Bertalon, there is a great appreciation of life after living seven decades since facing death in war.