Almost 15 years since University High School first opened its doors in August of 2000, I am still in awe as I walk through the halls of this impeccable non-sectarian college preparatory school located in Carmel, Indiana. The walls are lined with staff and student achievements, among a variety of other awards in the field of education. UHS has continued to maintain its standards for a structured and personalized high school education over the years, and its reputation for producing well-developed students has garnered the respect of universities across the nation. James (Jim) P. Fadely, PhD, Director of College Counseling, proudly shared with me that University High School was awarded an impressive $11,274,792 in merit scholarships, the highest amount awarded to any independent college preparatory high school in Indiana and out-performing local area public high schools.

Jim, one of six founding staff members, has been with UHS since the launch of the school in August of 2000. He left St. Richard’s Episcopal School as their director of admissions and came on board UHS as the director of college counseling and director of marketing and public relations. He was also tasked with developing the history program for the school as his graduate work is in U.S. History. As enrollment at UHS grew, his focus transitioned to strictly facilitating the college counseling program, and now he is “all college, all day, every day.”

“We did our due diligence in the beginning and looked at best practices in college counseling among independent schools around the country,” Jim explained. “What we noticed was that even in private, independent college prep schools, people often didn’t begin to talk about college until midway through the student’s junior year. We also found that there wasn’t a more consistent sequence process, which is key to the success our students have had in the college placement front. We noticed that even though independent schools are typically smaller, there wasn’t a personalization that you would expect relative to tuitions. Those were the two hallmarks for me to take away about the college counseling program we offer at UHS.”

The program at UHS is incredibly comprehensive, and the college counseling starts the first week of the student’s freshman year. It is age appropriate and designed to not pressure the students or parents, but to empower them with information so at the end of their high school career, they thoroughly understand how colleges make admission decisions and have a solid idea of which university is the best fit for them.

“The students can craft their high school journey however they want, but they are informed of the rank, order and criteria and on how the college is going to make their decisions,” Jim said. “That is what’s different about University. A four-year sequential college counseling program and a lot of one-on-one time leads to successful merit scholarships. We approximate that by the time students have graduated, they have had an estimated 40 hours-plus of direct contact with the college counseling office  through one-on-one sessions and sessions in conjunction with their parents.” 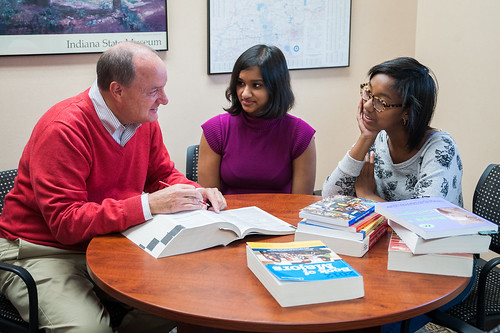 The college program is designed to match students with “good fit” college profile lists so they have a good sense of which college is right for them. UHS has the profile requirements for every college in the U.S. Colleges use a student’s ACT, SAT, GPA, and other benchmarks to measure the student against the college profiles. Jim and his students develop a college list their sophomore year, and they list colleges that are “reaches, good fits and safeties.” Safeties are schools they know have a strong probability of being admitted to.

“The merit scholarship success our students have had is in part due to the amount of guidance in figuring out what the ‘good fit’ schools are for them, along with parental input,” Jim said. “If they are on a ‘good fit’ profile, then the colleges are going to offer merit scholarships as incentive to attract a student from what they know has been a rigorous high school education of more reading and writing and small group interaction.”

The UHS, senior class of 2013, which consisted of 68 seniors, was awarded
$10.7 million in merit scholarship funding and surpassed that high-water mark by receiving over half a million dollars more
in 2014.

“We were happily surprised,” Jim proclaimed. “What we’re always mindful of is that these kids are a product of a four-year education here at UHS and it’s not just this office but all of us together who have a wonderful product to present to the colleges. I think the process we’ve worked out and having the opportunity to break the mold and think new thoughts, over 14 years ago, have given us great opportunities. It speaks volumes about the quality of education this school provides to a student, and we’re very proud of the college counseling program we’ve been able to establish.”

On a more personal note, Jim spoke about what it means to him as a faculty member and mentor. “It has been gratifying, and we do feel it makes a meaningful difference to our students as we help them move into the next stage of their academic career. There are a lot of variables involved in life, but we are as intentional as we can be in terms of providing a structured sequential process to our students so they are properly prepared on their path to a higher education.”

The number of merit scholarships being awarded has increased as recent studies show a concerning decline in college admissions. Jim explained, “Merit scholarships are usually offered with the letter of admission as an incentive for the student. It’s a very competitive process, college to college, and a student rarely has to do anything for a merit scholarship other than apply. It automatically triggers the process internally at the colleges, always on the hunt for good students.” 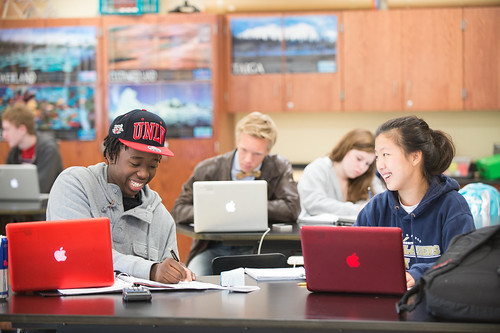 Studies published from sources such as the Chronicle of Higher Education have produced statistics indicating that we are in the third year of a declining number of seniors applying to colleges across the U.S. The demographic for U.S. seniors includes public and private institutions and is a projected decade-long decline.

“There are 2,200 colleges charging increasingly higher tuitions and a declining number of seniors,” Jim stated. “For fall 2013, almost 50 percent of U.S. colleges did not meet enrollment goals, and that’s a giant statistic. Colleges are increasingly willing to offer merit money to well-developed students.” Jim concluded, “Now is a very good time to apply to colleges.”