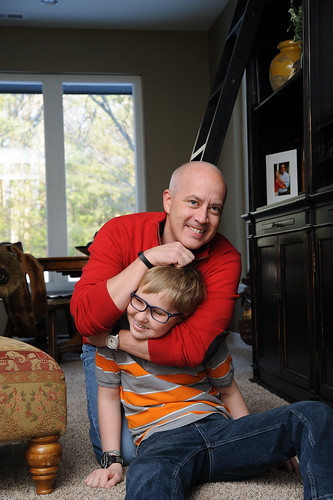 Tom Britt first met Luke Andritsch five years ago when he was battling leukemia. Today, Luke is a healthy 11-year-old thanks to research funded by the Leukemia & Lymphoma Society.

In early 2010, I received a phone call from a Geist resident telling me about a 5-year-old boy battling leukemia named Luke Andritsch. He was diagnosed on Mother’s Day at the age of 3. Through The Leukemia & Lymphoma Society, they had formed a Team in Training group called Team Luke and began running various races around town in his honor. They were talking about running the St. Vincent Geist Half Marathon & 5K, and I thought this would make for a good story for our Geist Community Newsletter.

Arriving at their front door, Luke greeted me donning a Spiderman costume complete with padded muscles. He was short, chubby and nearly bald. Vicky, Luke’s mom, gave me and our long-time photographer Brenda Staples a tour of their home ending in Luke’s bedroom upstairs. Luke was anxious to show us his super hero toys, “get well” letters on his walls, and his stuffed animal toys wearing scrubs and surgical masks.

Vicky told me that trying to explain leukemia to a child is difficult. “We told him that the cancer was a bunch of bad guys in his blood, and the chemo was the good guys going in there to kill them.” In many ways, the visit and ensuing story was inspiring. In other ways, it was heartbreaking. No child should have to deal with such a horrific disease as leukemia. (read cover story online)

It was through the Andritsch family that I learned more about the research work being funded and sponsored by the Leukemia & Lymphoma Society. In 2011, Luke was named their “Boy of the Year” and participated in a 10-week fundraising campaign called “Man and Woman of the Year.” After the Grand Finale Gala, the Andritsch family had a party of their own for Luke. His chemo port in his chest was removed that summer and the Team Luke followers and friends hosted a “Port Party” in his honor. Luke was cancer-free and done with chemo. 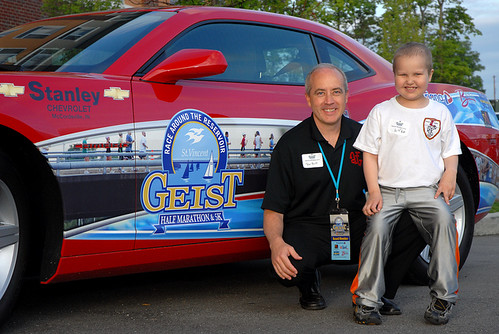 Luke was fascinated by the Geist Half pace car, so we snapped this photo at the sponsors reception prior to the race in 2010.

Last fall, The Leukemia & Lymphoma Society called to inform me that I had been nominated to run for the 2015 “Man of the Year.” After seeing how they had helped the Andritsch family and several other friends and neighbors dealing with blood cancers over the years, I accepted the challenge. Much like a political election, the man and woman who raise the most money during a 10-week campaign (Feb. 26 – May 9) wins the title.

My campaign will look and sound much like a political campaign; after all, we are in primary season. You’ll see campaign posters at restaurants around Indy like Mama Bear’s and Lincoln Square Pancake Houses. You’ll hear my “negative campaign” commercials on various radio stations. You might even spot a political yard sign asking you to “vote against cancer.” 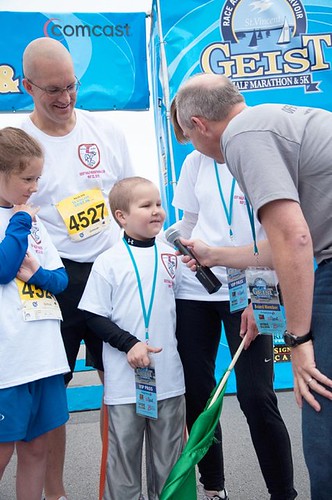 Luke Andritsch was the official starter of the 2010 St.Vincent Geist Half Marathon & 5K.

A campaign against cancer is personal to everyone. Only cancers of the respiratory and digestive systems, including lung and colon cancers, are more deadly. Leukemia causes more deaths than any other cancer among children and young adults under the age of 20. One person is diagnosed with blood cancer every three minutes. Every ten minutes, another person loses the fight. More than 1.6 million people in the United States are living with or are in remission from a blood cancer.

To date, The Leukemia & Lymphoma Society has funded more cancer research than any other voluntary health agency in the United States or Canada. When they started in 1949, the survival rate for acute lymphoblastic leukemia (which is the type of cancer Luke had) was only 3 percent. Today, thanks to advances in research, the survival rate is more than 90 percent. For other blood cancers, the survival rate has doubled, tripled and even quadrupled. However, one third will not make it 5 years post diagnosis. We have a long way to go.

On a personal note, I’ve had several friends and family suffer through cancer. My wife and I started a charity event the year we met the Andritsch family called Vines for Life, which raises money for three local cancer charities supporting patients and survivors. While we’ll continue to help those dealing with the fall out of cancer, this is our one opportunity to get out ahead of cancer and fund the cure. My hope is that we’ll have a cancer-free society in my lifetime.

I’m asking each of you to donate to the Leukemia & Lymphoma Society and support our campaign against cancer. There is a donor envelope in the center of this publication that you can send back with your generous donation. You can also visit my website at TomBritt.com to learn more about the campaign, sign up for emails from the campaign trail, and donate online via a secure link. You can also read about the latest advancements and treatments that the Leukemia & Lymphoma Society has funded. Every dollar you donate gets us one dollar closer to the cure.

As for Luke, he’s a healthy 11-year-old boy that still visits Riley Children’s Hospital every month passing out “rhythm pax.” Team Luke is now its own charity that raises funds year round to give other children and families who have been dealt the cancer card some hope. Please join us in our campaign and thank you in advance for any and all support you offer us along the way.