Tom Abernethy’s IBA: An Academy of Basketball and Life Lessons

As he prepares for a May afternoon practice at the Indiana Basketball Academy, Eliot Burgett wears a blue jersey top No. 21, a replica of one worn by Indiana Pacers star forward David West. 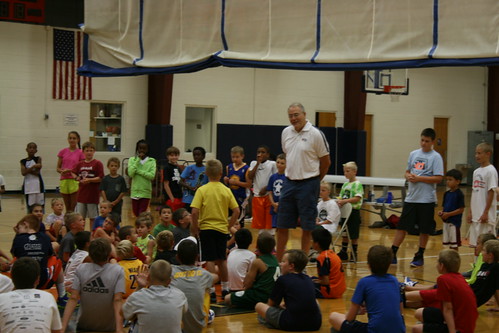 It is likely, if not a certainty, that this episode of imitation will represent the closest the eight-year-old grade school student will get as a player in the National Basketball Association. Indeed, the upcoming workout is not a drill to fine-tune the skills of budding young NBA superstars. And this limited proximity to professional basketball is just fine with Josh’s mother, who has regularly made dozens of trips in the last three years from her home in northeast Fishers to the basketball/life education center in Carmel.

“We love the IBA (Indiana Basketball Academy),” said Cara Burgett. “It teaches the kids more than basketball. They train the kids hard but they also work on self-confidence and other things that kids can take away with them. It doesn’t matter how good someone is. The staff works with every kid the same way.”

And those words are exactly what Tom Abernethy has hoped to hear since he opened IBA in 1995. Not all of the approximately 25,000 young players who have attended camps at IBA in the last 19 years have evolved into college or pro basketball performers, but most, if not all, have learned life lessons from Abernethy, chief aide Andrew White, and a battalion of college coaches such as Jim Crews (St. Louis, Evansville and Army) and Todd Lickliter (Marian, Butler and Iowa).

Among those teachings is that character counts—for all camp graduates.

“Every kid is valuable to us,” said Abernethy, whose basketball resume includes successful stints in high school (South Bend St. Joseph), college (Indiana University), professional (Los Angeles, Golden State and the Pacers) and overseas (Italy). “The kids know we care about them and the parents know we care about their kids. We try to help every kid and especially those who may not have a future in sports. We want to get them ready for the real world.”

Of course, there have been future basketball kingpins who polished their budding skills on the two courts at IBA or at the satellite facilities in Zionsville or Lawrence. Indiana and Park Tudor star Yogi Farrell, Butler guard Kellen Dunham, and current high school standouts Ryan Cline (Carmel) and Derrik Smits (Zionsville) have graduated from Abernethy-led classes. Additionally, numerous other area players–such as Gordon Hayward of Brownsburg–have played in games in the Carmel facility. 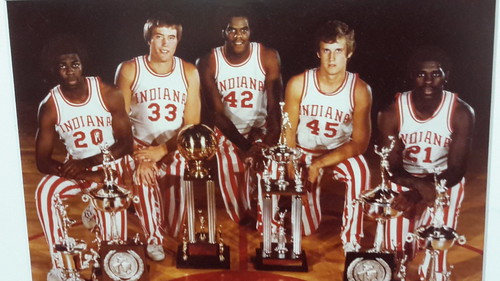 Abernethy confesses that his camps are probably more designed for the rank-and-file players than those who hope to take the AAU circuit to stardom.

“AAU makes a lot of sense for some players,” Abernethy assessed, “and the popularity of AAU basketball has grown. But we are not a tournament venue and our market has expanded. We are coming off our two busiest years.”

One of the most hectic time frames in the gymnasiums in Carmel, Zionsville and Lawrence starts in June when summer camps begin. Abernethy and his staff will be buckling up for one-hour lunch shooting camps: “to get your shot fixed”; speed, strength and skill training sessions; shooting practices; and overall extended camp campaign sessions that stretch into three hours.

Not to be forgotten is the availability of a Bible Basics camp, cementing the strong Christian values that radiate from the 60-year-old Abernethy.

“God has made this whole thing work for us,” said Abernethy, who left the commercial real estate world in the 1990s to build the IBA. He acknowledges it was a leap of faith–his faith in the Supreme Being–that helped him bridge this chapter of his life.

“I wasn’t that nervous about the project—because of my faith,” said Abernethy, whose wife Susie serves as the unofficial Chief Financial Officer. “Things haven’t always gone exactly perfect, but we have had success.” 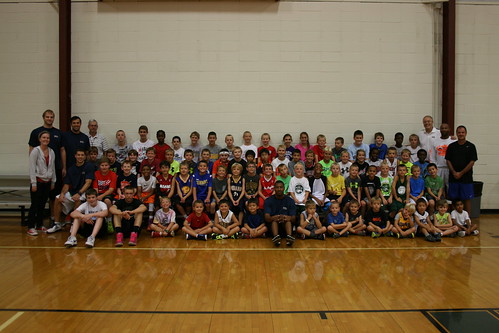 One of the things Abernethy teaches campers is that the challenges of life can present potential turnovers for participants. For him, those times included when his father died when he was 10. A few years later, a brother died. “Tough things happen in life,” Abernethy noted. “We tell our kids that you can’t give up.”

The Abernethy family learned their “never give up” mode with twins Matt and Andy. After enduring difficulties off the court in college at Pacific, the pair transferred and are now enjoying successful adult careers. And senior Abernethy’s career marched on despite disappointing basketball setbacks. After his South Bend St. Joseph team (which included another Indiana star, John Laskowski) lost in the sectional during his junior season, Abernethy and St. Joseph came back and won the sectional a March later. Following the stunning upset by Kentucky in the 1975 NCAA tournament, Abernethy and the Hoosiers beat Michigan in the NCAA championship game to wrap up an unbeaten season in 1976.

Eventually, life’s journey took Abernethy to his basketball school on Bauer Drive West in Carmel. And one of his earliest challenges was when he coached a seventh and eighth grade basketball team that included his youngest son, Todd (a future player at Mississippi). Abernethy took his team to a tournament in Florida and played against a team from Ohio. On the Ohio roster was a seventh grader named LeBron James. “I had never heard of LeBron,” admitted Abernethy. “Todd scored a lot of points early, but then LeBron guarded him and shut him down.”

But during the rematch the next summer, the Indiana team defeated LeBron & Company, 52-51.

“That was fun coaching those kids,” recalled Abernethy.

Today Abernethy enjoys that same thrill when he sees an Eliot Burgett take the court, wearing his David West jersey and learning another lesson about life on or off the basketball court.

“I always wanted to combine my gifts in basketball with a business setting,” said Abernethy, who has found that parents and their kids are frequently repeat customers. “It’s all about how the kids are treated and how they are taught. There’s no secret to it. If the parents know that their kids are being treated well, they are likely going to be repeat customers.” 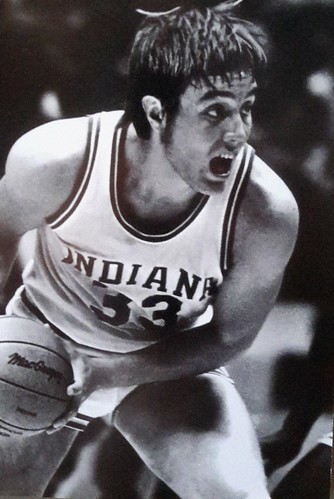 You had many thrills as a basketball player. What was your best moment?

“Probably when we (St. Joseph) won our sectional. We played at Notre Dame and beat (South Bend) Adams. I had something like 30 points and 20 rebounds. It was a great moment.”

Can you tell us about the first meeting between Indiana coach Bob Knight and your mother?

“It was in our living room and my mother grilled him. She was tough on him. They had been recruiting another player and she wanted to make sure that they wanted me. But I wanted to go to IU even if I hadn’t played basketball.”

How difficult was the 1975 NCAA tournament loss (92-90) to Kentucky when stalwart Scott May suffered a broken arm during the season?

“We weren’t ready for the season to end. Some of us went on vacation to Florida after the season and it was a terrible week.”

Who was the toughest player you guarded?

“Adrian Dantley (Notre Dame). He was a bear to guard. His body was so strong and you did everything you could to keep him off the boards.”

Have you ever thought about trying on your “short” basketball shorts from your Indiana playing days?

“No, no way. And my shirt probably wouldn’t fit much better.” 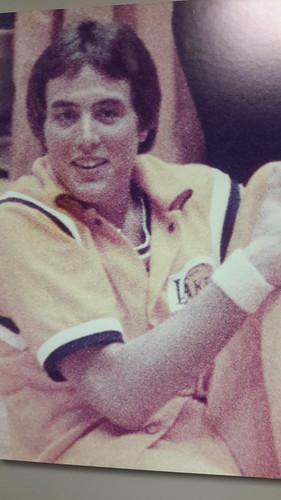 What was it like to play with Kareem Abdul-Jabbar during your time with the Lakers?

“It was great. He was unbelievable. My locker was next to his and I was so impressed with his work ethic. And I learned how to pass him the ball.”

Did you ever guard Larry Bird? Did he trash talk you?

“I guarded him a little. He never said that much.”

What do you remember about your role in the Hollywood movie, Inside Moves, with John Savage?

“It was filmed when I was with Golden State and there was a scene that was to be at one of our games. They showed me dribbling the ball up court and the announcer saying my name. It was cool.”

What was your role in the movie Hoosiers?

“I was asked to be a technical advisor. I helped with the players and designed a couple of plays. I didn’t design the “picket fence.”

Which game do you prefer, college or NBA?

“I love the NBA. The biggest change has been the athleticism of the players. You can’t imagine a 6-7 power forward.”