Shining a Spotlight on the Songbook Finalists

It’s that musical time of year again. The Songbook Academy® finalists have been selected and will compete in the upcoming annual competition. The nation’s top high school-age vocalists vie for the title of Songbook Youth Ambassador. The finalists will perform in the Songbook Academy® Finals at the Center for the Performing Arts in July.

Forty finalists representing 17 states – 10 finalists from Indiana – were selected from among hundreds of applicants to spend a week this summer at The Center for the Performing Arts. The finalists will experience workshops, master classes and mentoring from performing arts professionals and respected university educators, led by five-time GRAMMY® nominee Michael Feinstein, founder of The Great American Songbook Foundation and the Academy. This year’s Academy is sponsored nationally by the Efroymson Family Fund, a fund of Central Indiana Community Foundation.

The mission of The Great American Songbook Foundation is to inspire and educate by celebrating the timeless songs of pop, jazz, Broadway, and Hollywood. The Foundation is committed to preserving and elevating this rich legacy by curating physical artifacts of its creators, performers, and publishers; offering programs for the public and research opportunities for scholars, historians and performers; providing educational opportunities and multidisciplinary curricula for student musicians; overseeing the Songbook Hall of Fame; and operating a multimedia gallery for public exhibition of its collections.

At the closing concert, all 40 participants will perform, and the Top 10 compete for awards before a panel of judges and a live audience. Only one is chosen as Songbook Youth Ambassador for the coming year, a title that comes with career-boosting opportunities to perform at such venues as Carnegie Hall, the Kennedy Center and the annual Great American Songbook Hall of Fame Gala.

Chris Lewis, Executive Director of The Great American Songbook Foundation, is excited about the local response to the auditions that were 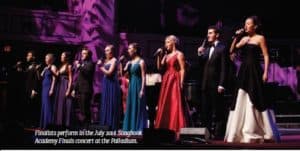 Finalists perform in the July 2016 Songbook Academy Finals concert at the Palladium.

received this year. Lewis joined the Foundation in August 2011 as Director of the High School Vocal Academy and Competition, now known as the Songbook Academy®. Lewis holds a Master’s degree in Education and has worked as a history teacher and special education liaison for the New York City Department of Education. He is an accomplished musician with experience as a professional vocalist, choral director and voice teacher and was a member of the vocal jazz octet, Pieces of 8, along with his wife, Kelly.

“This was the largest response and the largest group that we had audition from the local area, which is exciting,” Lewis expressed. “I think that we can attribute that to the growing awareness of the program and that we didn’t conflict with the summer show choir camps this year. That has been our biggest challenge, locally and regionally.”

A testament to the high school performing arts departments throughout central Indiana, students from Carmel, Zionsville, Greenwood, and Indianapolis have made it to the finals to compete with their peers from across the nation.

“We are in special place here in the Midwest where the arts are a big focus for our local schools,” Lewis emphasized. “The kids from our area are fortunate to have access to quality programs that are not available in every community.”

The Academy has evolved into a comprehensive performance intensive. The participants will spend seven full days in the program, learning vocal technique lessons and other critical lessons from notable and award-winning artists such as Sylvia McNair. The students will attend college audition prep courses from professors from the nation’s top college art programs. Lewis mentioned that the Academy has been attracting musical theater students over the years, so they began bringing in Broadway stars to talk with the students about what it is like to work in the “business.”

“This year, we’re going to have an acting workshop as it relates to lyrics and storytelling,” Lewis stated. “The Academy has really grown into a comprehensive educational program. We’re still achieving our mission of exposing children to the Songbook music, but we’re also providing something of value to these students. We are giving them the experience that they will need when they audition for a college arts program or are moving forward with their professional careers. I feel that we are building a Songbook family that extends across the country.”

Feinstein explained why the Academy is important to cultivating the up and coming stars of tomorrow. “When I was growing up, I didn’t have anything like the Songbook Academy to help me along my musical path,” Feinstein said. “I started playing the piano at the age of 5 and started singing a few years later. When I got out of high school, I didn’t know what I wanted to do. I knew musically what I wanted to accomplish, but there was no place for me to learn what I wanted to learn.

“The Songbook Academy is a place where young people learn something that I wish I could have experienced when I was growing up. It fills a certain kind of void or gap that, to me, is essential. If I had this music when I was a kid, in this way, it would have changed my trajectory and brought me closer to my goals much sooner. I know the young people who are involved in our Academy are closer to what they want to accomplish in life because of this music.

“To see our students come together and share their mutual love of music and stay connected to each other is fantastic. Some of them may not become professionals, but many of them do. Many of our graduates have performed at Carnegie Hall, Jazz at Lincoln Center, the Kennedy Center, on television shows and many other wonderful venues. Our 2014 Youth Ambassador Maddie Baillio recently made her television debut as the star of NBC’s ‘Hairspray Live!’ I’m so proud of all of our Songbook alums. I know The Great American Songbook is in good hands.”

Two other events during the week are open to the public free of charge:
· Public Masterclass, July 19 from 2-5 p.m. at the Palladium – 10 randomly selected participants undergo critiques from Michael Feinstein and guest mentors
· Songbook Showcase, July 20 from 10 a.m.-12:30 p.m. and 2-4:30 p.m. at the Palladium – All 40 participants perform solo with 10 chosen to compete in the Saturday finals.

Singing anything from musical theater and country to jazz and pop, Taylor has enjoyed creating her own style. She has appeared in numerous musicals including the Carmel High School Performing Art’s
production of “The Phantom of the Opera” and is a member of the renowned Ambassadors show choir at Carmel High School. She has performed solo at many Indianapolis-area venues and was featured at the 2016 Elkhart Jazz Festival.

Weston Clark
West Clark is a 2017 graduate of Park Tudor High School. In his sophomore year of high school, he was honored to serve the Midwest region as a National Student Poet, a youth poetry ambassador representing The President’s Committee on the Arts and Humanities, The Institute of Museum and Library Services and the Scholastic Arts and Writing Awards.

Cynthia Kauffman
Cynthia Kauffman is participating in The Great American Songbook Academy for her first time this year. She is a sophomore at Zionsville Community High School and is involved in community theater, her school’s mixed show choir (Royalaires), volunteering at her church, babysitting and school clubs.

Anja Reese
Anja Reese has enjoyed being a part of both the Carmel Ambassadors and the Carmel Accents as well as Carmel High School’s a cappella choir. Her theatrical experience includes both community and professional theater in the Indianapolis area, including roles in “Les Miserables,” “Godspell,” “Romeo and Juliet,” “Phantom of the Opera,” “Oklahoma!” “Annie” and “Footloose.”

The 2017 finalists from Carmel and Zionsville are

“Where are they now?”

The previous Songbook Youth Ambassadors have gone on to achieve incredible success after winning the competition. See where they are now and what they have already accomplished in the early stages of their respective careers.

· Julia Bonnett of Carmel was named the very first Songbook Youth Ambassador in 2009 and performed with Feinstein and David Hyde Pierce at the Center for the Performing Arts gala opening celebration in 2011. She has since appeared with the Carmel Symphony Orchestra and Indiana Wind Symphony and played top roles at Booth Tarkington Civic Theatre and Beef & Boards Dinner Theatre.

· Annie Yokom (2010) of Chicago has appeared in regional theater across the country and
made her national television debut on Fox’s “Prison Break.”

· Nick Ziobro (2012) of Manlius, New York, has appeared on NBC’s “America’s Got Talent” and recorded his Feinstein-produced debut album, “A Lot of Livin’ to Do,” with help from guitarist Bucky Pizzarelli, bassist Jay Leonhart and other jazz greats.

· Julia Goodwin (2013) of Baldwinsville, New York, was featured on Michael Feinstein’s PBS New Year’s Eve special and has appeared on “America’s Got Talent” and ABC’s “Inside Edition.”

· Lucas DeBard (2015) of Lebanon, Indiana, is studying music education and jazz at Indiana University and performed over the holidays at Feinstein’s/54 Below in New York City.

· Brighton Thomas (2016) of Burbank, California, has performed around the country with Michael Feinstein and made her NYC debut at Feinstein’s/54 Below last December. Earlier this year, she was a Grand Prize Finalist in LA’s Spotlight Awards. She recently earned Most Outstanding Actress honors at the 2017 Jerry Herman Awards. In June, Brighton will compete in the National High School Theatre Association’s Jimmy Awards in New York City.