nd singer Megan Hilty first gained fame on Broadway as Glinda the Good Witch in “Wicked,” Doralee Rhodes in “9 to 5: The Musical” and Brooke Ashton in “Noises Off,” which earned her Tony Award and Drama Desk Award nominations. She went on to light up TV screens as triple-threat Ivy Lynn in NBC’s musical drama “Smash” and Liz in NBC’s “Sean Saves the World,” along with recurring roles on “The Good Wife,” “Louie” and “Girlfriends’ Guide to Divorce.” Her acclaimed solo concerts feature songs from “Smash,” her own recordings, the world of musical theater and The Great American Songbook. Don’t miss Megan Hilty at the Palladium on Friday, February 15, 2019, at 8 p.m.

Q: At what age did you and/or your family realize that you had a musical gift? How was that gift nurtured throughout your childhood?

A: My mother said I was just always singing for as long as she can remember. My parents were never stereotypical “stage parents,” so they never pushed me to do anything theatrical. But they were always incredibly supportive whenever I expressed interest in studying music or getting involved in theatrical productions.

Q: Do you recall your first on-stage performance? What play/musical was it, and what role did you play?

A: I don’t remember how old I was exactly, but I was very young when I did a youth theater performance of “Oliver” – I played Bet. I had one speaking line, one solo-singing line and I had to kiss Oliver on the cheek … it was a VERY big deal!

Q: We all have role models and people who have inspired us throughout our lives and careers. Who is one of your role models that continues to influence you the most today?

A: Definitely Bernadette Peters. I’ve always been in love with her as a performer, but when I had the chance to work with her on “Smash,” I got to see for myself what an incredible person she is offstage/screen, and now I love her even more.

Q: You got your first big break after college in your Broadway debut as Glinda in “Wicked.” What was that experience like for you as you look back?

A: It was huge. That show changed my life in so many ways. It brought incredible people into my life and catapulted my career out of college.

Q: What advice would you give up-and-coming talent like our Great American Songbook Academy kids, specifically when it comes to professional auditions and landing their first big role? 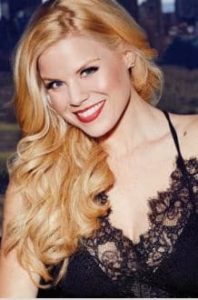 A: I have two pieces of advice:

Q: What do you enjoy about performing for live audiences the most?

A: I love that very primal exchange of energy and feeling like I’m sharing a real moment with the audience. And when it’s live, anything can happen! No two shows will ever be exactly the same, and I love that.

Q: You are balancing a career in TV, movies, singing/recording and live performances as a wife, mother and talented human being. How do you balance the work/life routine?

A: My husband and I are constantly trying to navigate our work and life because it’s constantly changing. The great thing is that I have an incredible partner (in my husband), and we figure it out together!

Q: What will the concert be like for attendees? Will you perform songs from The Great American Songbook?

A: It’ll be a mix of songs from Broadway, “Smash” and definitely a few from The Great American Songbook!

Q: What production and role would you like to be in that you haven’t yet? [Bucket list role]

Q: When you are not recording, acting, performing and being a wife and mother, what do you like to do to unwind and relax?