Kip Moore is coming to the Palladium, Friday, March 8th at 8:00 p.m. Described by Rolling Stone as “one of country music’s most tireless and powerful live draws,” Kip Moore became an instant star when his platinum-selling debut album, “Up All Night,” spawned three No. 1 hits: “Beer Money,” “Hey Pretty Girl” and the smash “Somethin’ About a Truck.” His follow-up release, “Wild Ones,” was hailed by The Guardian as “an impressively singular release from 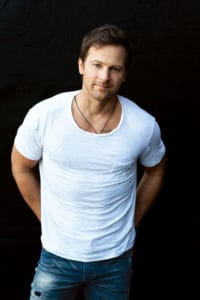 Moore’s current Top 20 entry, “Last Shot,” comes from his acclaimed third studio album, “Slowheart,” which also included the No. 1 hit, “More Girls Like You.” “Slowheart” drew praise from critics like NPR as Moore’s “most complete, cohesive declaration of his artistic sensibilities yet,” landing on multiple “Best Of” lists including Entertainment Weekly, Rolling Stone, Taste of Country, Sounds Like Nashville, The Boot, PopMatters and Whiskey Riff.

His latest collection, released in November, is “Room to Spare: The Acoustic Sessions.” The seven-song EP, which kicks off with an unplugged version of fan favorite “Plead the Fifth,” showcases Moore’s signature sound in a stripped-down setting that highlights his gritty vocals and evocative lyrics.

For more information on Kip Moore, visit kipmoore.net. For tickets to the show, visit thecenterpresents.org.

Going back to the early years, when did you realize your passion for writing music and performing?

My mom was a piano teacher, and my dad would always be playing rock and roll records at the house, so I think that the passion I have for music has always naturally been a part of me. From the moment I picked up a guitar, I spent my time studying the craft of songwriting and honing my sound. Through the years out on the road, the drive to perform has only grown because of the fanbase. Their loyalty allows me to put it all out on the table and play every show as if it was our last.

Growing up, I gravitated towards artists like Jackson Browne, Willie Nelson and Bob Seger. Even as a kid, I found myself relating to what they were saying, and I’ve always paid close attention to an artist’s lyrics. I would study Bob Dylan’s lyrics too as a way to fully understand how artists I respect shaped their stories.

Before the release of “Up All Night” and signing with MCA, I had moved to Nashville and eventually signed a publishing deal with Brett James. At that time, I was living above the publishing offices, co-writing with writers in town and working odd jobs to get by. I am thankful to have had someone like Brett in my corner because that doesn’t happen very often, but he saw something in me and fought with me to make the music I wanted to make for that first record.

Is it difficult to balance the creative process and fulfilling the contractual obligations that artists are typically bound by?

I’m fortunate enough to be in a position where I have a job where I get to do what I love every day. I also have a team that understands that I’m never going to do things totally by the book, and we have found a way to make it all work and stay true to what I believe in.

Which album are you most proud of and why?

That’s a difficult question. I believe in [each], and each album is special to me for different reasons. “Up All Night” for the fact it launched this whole crazy journey so far. “Wild Ones” because that’s when it felt like it was make-or-break – you’re either with me or you’re not. “Slowheart” because we found our groove with that record, and I was really able to immerse myself in every aspect in the studio.

Which song or album challenged you the most?

“Wild Ones” probably challenged me the most. We were still riding the wave from “Up All Night,” but what I didn’t know at that point was the die-hard fans knew that record as much for the album tracks as the hits. So, when we went into the studio for “Wild Ones,” I had already taken a full record of songs to my record label that got scrapped. That was hard to wrap my head around and to continue with making “Wild Ones,” but that process was so important because when we went back out on the road with those songs and everyone was singing them back to me, I knew that we were on to something.

When creating “Room to Spare: The Acoustic Sessions,” can you explain your process of selecting the songs, and what factors played into your selections?

The acoustic EP was built from something the fans had been asking for the longest time. I had always promised them it would happen and now felt like the perfect time for that project. Some of the songs are ones that I had written years ago that I had been waiting for the right record for them to be a part of, whereas some were newer but felt right for this more stripped-down sound.

What’s next? Any new projects in production?

I’m always working on the next thing. It’s just how my mind works, especially when it comes to the next creative body of work. Right now, I’m focusing on the next record and am already feeling really inspired and fired up by what has taken shape so far.

What would you like for the audience in Carmel to take away from not only your performance but you as an artist?

I never really answer this question because it’ll leave you disappointed if you have a certain thing you want an audience to leave with. People internalize music in so many different ways, from one person to the next.

Other than performing and songwriting, what is one thing on your “bucket list” that you haven’t done yet?

I find true joy in traveling as well as experiencing new cultures, so new places to explore are always on my “list.” I also try to give back when I can, so a goal of mine is to do some missionary work in the future and help those who really need it the most.