Best known as ruthless cheerleading coach Sue Sylvester on Fox’s “Glee,” actress Jane Lynch brings her comedic skills and musical prowess to the stage in this hilarious and poignant show inspired by classic Christmas albums of the 1950s and ‘60s.

Joining her are longtime friend and actress Kate Flannery (Meredith on NBC’s “The Office”); singer-producer Tim Davis who served as vocal arranger for all six seasons of “Glee”; and a jazz combo, the Tony Guerrero Quintet. All of them collaborated on the 2016 album version of “A Swingin’ Little Christmas,” which features 10 classic carols and five nostalgia-inspired original songs penned by Guerrero. 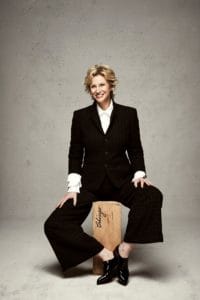 As you are originally from our neighboring state of Illinois, do you have any connections to Indiana, or have you performed in Indianapolis or the surrounding areas prior to this upcoming performance?

I’m from Dolton, just a few minutes from Hammond, Indiana. We [my family] would go to Indiana to buy our fireworks, and my parents bought cheap cigarettes without tax from Indiana for years. A lot of my friends from high school now live in Indiana, so I’ve been visiting them there. Three of my nieces and nephews went to IU, so I am familiar with Bloomington and Indianapolis. I think I’ve performed in Indianapolis with another show.

Early in your career, you immersed yourself in the Chicago theatre and improv comedy scene and worked with groups such as the Second City Touring Company. Working with a predominantly male group, did you ever feel that it was more challenging for you as a female actress/comedian, or was it more of an even playing field from your perspective?

I’ve worked with companies and with people where women were equal all the time. All my Chicago comedy groups that were under the direction of Jill Soloway – who was one of our big ralliers – we were all equal. She [Soloway] would get us all together to do shows and produce them, and we were all equal. We were gay, we were straight, we were men, we were women, but we were all equal. I know that from the outside looking in, it’s a horribly sexist industry. But you know you’ve got women like Sarah Silverman who is not only wonderful but speaks loudly and carries a big stick for other women in comedy. It’s currently difficult for women, and it can be kind of brutal sometimes, but I think we’re on the brink of a huge change now.

Having worked with some of Hollywood’s best talent, too many to name, tell us about working with iconic names such as Christopher Guest, Eugene Levy and Catherine O’Hara, all of whom you have worked with on a few projects such as a personal favorite of mine, “For Your Consideration,” where you played an entertainment reporter.

I was a little intimidated at first. Both Jennifer Coolidge and I went into this group together in “Best in Show,” and we were both a little nervous. And we walked out together going “God, I love these people.” It was a terrific experience. What makes them so great is that they are so ordinary. They really are. They’ve got great senses of humor, and they’re really funny, but they’re family people. They’re not fussy people. All they care about is writing/telling the funniest joke, and that is what I love about doing those movies with Chris [Guest], Eugene [Levy] and Catherine [O’Hara]. They are really just ordinary people who happen to have an extraordinary talent.

What did you learn from working with this group in particular?

It’s like hanging out with your best friends and making jokes. They’re always about being part of an ensemble, which I love too. I never wanted to be out there alone, and they’re all about being in a group and the best joke wins. They’re there to support each other and are about teamwork, and that’s what I learned.

Folks from around here are very proud to call Ryan Murphy a Hoosier native. A renowned talent in his own right, how did Murphy impact the development of your character, Sue Sylvester, on “Glee”?

He’s an extreme guy, and Sue Sylvester, in a large part, was inspired by Ryan. Ryan is also a great giggler all at the same time. He giggles at himself. He giggles at other people, and so Sue Sylvester was an extreme version of him. He taught me how to do the “Sue Sylvester” walk. [Laughing] He said, “This is how you walk into a room, and this is how you leave.” He said, “Turn on your heel and nose always a little bit up as if you are smelling something rather foul.”

If Murphy offered you another role in another one of his projects, would you take him up on it? 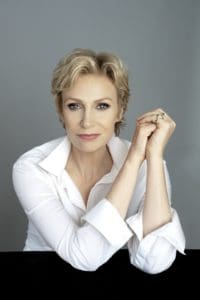 He’s just a delicious person to be around, and he loves to laugh and to be entertained. He loves artists and actors and has great respect for them, especially women who thought that they were done with their careers like Jessica Lange and Kathy Bates. They thought that they might be wrapping it up, and he was like, “No, you’re not, lady. You’re coming over here, and you’re going to do a role that’s going to win you a couple more awards before it’s all said and done.” So, absolutely, I would do anything with Ryan, but I would love to do something dark [like “American Horror Story”].

Shortly after the 2011 release of your published memoir, “Happy Accidents,” you said during an interview that setting goals was a waste of one’s energy. Will you elaborate on that further?

I think it is a waste of energy to set goals because of our own power, we’re not doing anything. Life has a way of taking care of us. Life has a way of pointing us in certain directions. If you’re looking for your next move, look at what is right in front of you. Sometimes people feel lost and don’t know where to go yet, but if you open your eyes and open your heart, you’re going to be sent somewhere. Just let life present to you what is going to be presented. Everybody just needs to relax, don’t worry about it and be nice to each other.

What inspired you to create “A Swingin’ Little Christmas” album?

I’m from a family that loves music. I sing, and my brother plays the piano in an R.E.M. cover band, but we grew up loving music, and Christmas music was a big part of our holiday. Most of that music was made in the late ‘50s/early ‘60s, and it turns out that my good friend, Kate Flannery, who I’ve known forever and have been singing on and off with for decades, loves that era as well. We hooked up with the Tony Guerrero Quintet. These guys are out of Orange County and do late ‘50s and early ‘60s jazz. They dress in black suits with pocket squares, skinny ties, shiny black shoes, and they just look f****ing great. The whole album, which is arranged by Tony, has that vibe, and you’ll get that from our show as well.

What is your best advice or New Year’s resolution for all of us as we head into 2019?

We’ve got to get out of our own corners. Everybody is in their own corner. We need to come into the middle again. Stop trying to stand your ground and own each other. It’s divisive, and it just doesn’t help any of us.