The Carmel Gala Shines a Spotlight on the City’s Youth

If you attended last year’s inaugural Carmel Gala, then you already know how much fun attendees are going to have at this year’s gala, Design Bright Futures, on Saturday, April 28, at the Ritz Charles in Carmel. Last year’s gala, benefiting the Carmel Youth Assistance Program (CYAP), raised nearly $60,000. The proceeds are used to meet the CYAP’s most pressing needs, helping the most vulnerable children and families in the Carmel community.

Without intervention, approximately 40 percent of those children would end up incarcerated, which could cost as much as $1.73 million per month for Hamilton County citizens. CYAP and its advocates are working with its mentors and volunteers to engage identified at-risk school-age children. Through the coordination of services, family assistance, tutoring and mentoring, CYAP is able to help build skills and confidence in the children and keep them on a path to success.

Melanie Lentz, ex-officio, CYAP board member, spoke about what attendees can look forward to at this year’s gala and mentioned that sponsor tables are still available as well as individual tickets.

“Our goal is to match or exceed last year’s fundraising goal,” Lentz said. “We will have a lot of different activities in the way of entertainment at this year’s gala. We are also encouraging people to wear bright-colored attire as our theme is ‘Design Bright Futures.’ We will have a ‘Dessert Dash,’ Giant Jenga, personalized caricatures, TapSnap Photo Booth and other surprises for our attendees. People filled the dance floor until the very last song of the evening last year, and we hope that they do so once again as The Bishops will be returning as our musical entertainment.”

Lentz mentioned the silent auction this year will include some fabulous items, such as a tour of the Asherwood Estate that was generously donated by The Center for the Performing Arts, handmade Indiana wood-carved signs and artwork by Marc Brewer, an American Doll package, vacation packages and many more incredible items. She also mentioned that the VIP experience will begin earlier this year, so people can mingle and spend some time with Mayor Brainard, the Honorary Chair, before the gala officially gets underway.

“This year’s Carmel Gala, Design Bright Futures, is really focusing on the bright side of things,” Lentz said. “There is so much going on in the world today. Who doesn’t want to go to an event and enjoy music from The Bishops, have a caricature done, laugh at it with your friends and capture the evening in the photo booth and enjoy themselves? We will also have late night snacks, an open bar and Giant Jenga for people to enjoy. People have a blast, and it’s all for a good cause.”

In addition to Mayor Brainard, the gala’s emcee for the evening, Larra Overton from Fox59, will address the audience as well as Guenter Haines, CYAP board president. Attendees will also be shown a video spotlighting some CYAP mentors and mentees. The video is graciously produced and donated by Adam Grubb Productions.

Lentz thanked the gala’s Naming and Gold sponsors, including Bell Techlogix, the City of Carmel, Sun King Brewing, Wilkinson Brothers, Ritz Charles and Carmel Monthly for their contributions to this year’s gala.

The Honorary Chair, Mayor Brainard, shared what he enjoyed most about the Carmel Gala and the value that CYAP brings to the future of the community.

“What was fun for me last year was that there were a lot of younger people and a different crowd than what we typically see at a lot of civic functions,” Brainard said. “The gala brought out a wide demographic of mid-to-late 30-year-olds to the 60-plus category that I’m clearly in. It was fun to see a lot of younger people getting involved in this cause, which is only going to make the city better in the future by intervening early on with kids who are struggling in our community.

“The program data shows that even as our population goes up, we’re seeing the number of school-age teenagers showing up in court going down. The only change has been the CYAP program that identifies at-risk youth. And with the partnership with the schools, the mentoring and counseling, and the engagement, these kids are getting the help and support that they need. The key is to get them engaged in activities, such as Boy Scouts, school clubs and other activities where they can have a support group and feel included with their peers.”

Don’t miss out on the fun and in helping a good cause for our community. Become a sponsor or purchase a table/tickets by visiting carmelgala.org. 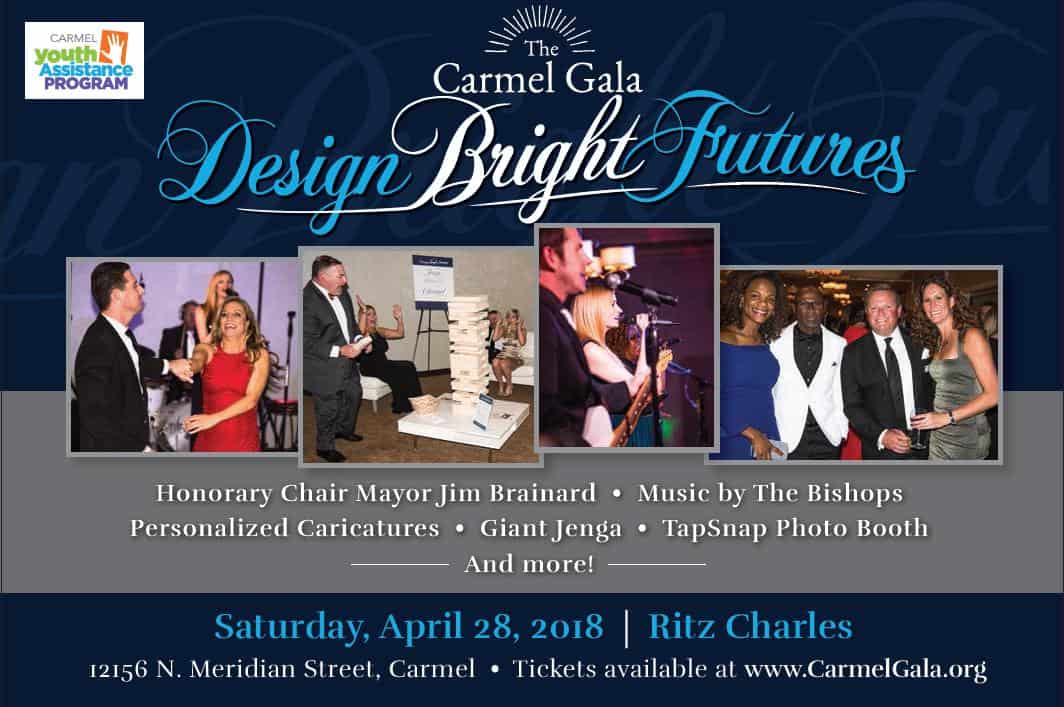