Revving Up to 10 Years and Growing

This year, the Artomobilia team will again host nationally recognized sponsors and speakers, more than 400 vehicles and approximately 15,000 visitors in the Arts and Design District in Carmel. This year, the event will feature more than 26 classes, including Super Car, Exotic, Classic, Sports car, European, Domestic, Vintage and Racers, attracting visitors from Indiana and the surrounding states. The

The Artomobilia focuses on display and appreciation over the competition, and although each of the automobiles is truly magnificent, this event is not just about cars; it’s about the art and automotive enthusiasts. The event embraces the essence automotive art and design by uniquely combining the artwork of local galleries and artists with the presentation of significant automobiles and their iconic design.

For 2017, the Artomobilia team will present for its third year an exclusive lifestyle event hosted at the Lucas Estate in Carmel on Friday, August 25 called Fuelicious: A Celebration of Wheels + Wishes. Scheduled on the night before Artomobilia, Fuelicious is designed to raise support and awareness for the Indiana Children’s Wish Fund, a statewide wish-granting organization focused on Indiana children, ages 3-18, with life-threatening or terminal illnesses.

Fuelicious will excite the senses by delivering a distinct environment, a premium culinary experience, a distinct collection of automobiles and a premier audience of committed automotive enthusiasts that combine to create an unmatched, exclusive social entertainment experience supporting the work of the Indiana Children’s Wish Fund. Fuelicious will feature 50 distinct collector cars hosted at the Lucas Estate.

Participants will enjoy the atmosphere of relaxed elegance and celebration, delivering a unique environment for pairing a discerning audience and unique sponsors. Guests will include a variety of automotive enthusiasts, business and community leaders and local personalities.

New this year, the Carmel Artomobilia will feature a unique Resto-Mod class that will be judged by Troy Trepanier of Rad Rides by Troy. Trepanier is a legendary custom car builder with an extraordinary portfolio of coveted awards. Trepanier’s shop has produced multiple Bonneville land speed record holders, Riddler, AMBR and Barrett Cup winners and multiple Street Machine of the Year awards and has been highlighted in numerous feature articles from a variety of publications.

In addition to receiving top honors in the racing and show car world, Trepanier has participated in countless road tours with both the Hot Rod and GoodGuys associations. Rad Rides has often been acknowledged for their engineering and design abilities. The shop has been honored with the GM design and multiple Mother’s Polish Shine awards, both given through the SEMA organization.

“There are only a handful of builders in the custom car industry, and Troy is the Lebron James of car building,” Leonard said. “He is a great guy and a legendary car builder. His cars are literally, perfect upon completion. We are excited to have Troy at this year’s Carmel Artomobilia to judge the new Resto-Mod class.” 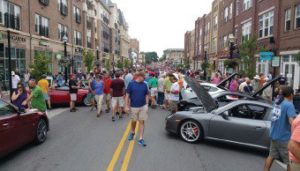 A Resto-Mod car has the timeless appearance of the original, but the outdated “guts” of the car have been replaced with the more modern, high-performance parts that are available today.

Trepanier lives in Manteno, a small town in Illinois, where he resides with his wife, Angie. He was invited to judge the new Resto-Mod class at the Artomobilia because of his credibility and expertise in the industry.

Trepanier grew up around cars and craftsmanship. He worked in his father’s automotive shop, and his grandfather taught him that “there’s only one way to do things: the right way.” Rad Rides by Troy was established in 1995 as a father-and-son business that has grown to become one of America’s top automotive shops over the past 18 years. Today, Rad Rides by Troy is one of the most well-known and respected names in the business.

In addition to building cars for many of the top automotive collectors in the country, Trapanier has worked closely with Ford, GM, Chrysler and Toyota on a variety of promotional vehicles.

Because of his presence in the hot rod industry, Trapanier has been featured on Discovery channel’s “Rides,” participated with Chip Foose on two “Overhaulin” episodes and has been highlighted in several documentaries concerning his efforts in Bonneville land speed racing.

“I’ve been doing this work for 25 years, and I’ve done almost every industry-related event in the U.S. at least once,” Trapenier said. “We up as a vendor more for the public relations aspect and to showcase what we do. One of the unique things about us is that we split off and got into land speed racing which parallels the hot rod industry side of what we do. There is a lot of history out in the Bonneville Salt Flats in Utah. We’ve been land speed racing since 1997 and have set multiple records for fastest speeds, and that’s one thing that we do as a shop that makes us unique from the others.”

Trapenier is not unfamiliar with Indianapolis and the surrounding areas. Though he’s always lived in Illinois, his mother gave birth to him at Methodist Hospital in Indianapolis while they were in town for the drag races in 1969.

“I kind of have Indy roots, and I like the area,” he said. “We’ve spent a lot of time in Indy at a lot of events down there over the years. I enjoy going to the new and upcoming events because it’s an opportunity to meet new people.”

Leonard explained that in addition to the new classes, the event is bringing in some cars representing each of the classes that haven’t been on display at the event in the previous years.

“For example, in one of the classes, we’ll have what is called a Singer Porsche, which is the quintessential Porsche because it is built from Porsche’s best body, best motor, best brakes, with the best suspension from all of the Porsche models combined into a single car,” Leonard said. “It should be a crowd pleaser. We’ll have some familiar faces returning and some new faces too.”

When asked what it meant to him to be celebrating 10 years of the Carmel Artomobilia, Leonard said, “Ten years is a fascinating milestone. We’ve had a lot of growth over the years. Predominantly over the last five years, we’ve seen a lot of growth in a lot of fronts. We have a lot more people from the local community involved in the event, and we’re getting a lot more attention from both within the greater metropolitan Indianapolis community as well as from around the country as we begin to bring on supporting organizations like Barrett Jackson and RM Sotheby’s Auctions.”