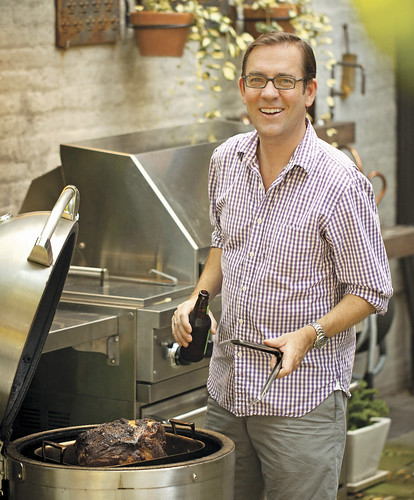 Indy is starting the New Year off with a culinary bang. In just a couple weeks, the Indiana State Fairgrounds will host The Fantastic Food Fest January 16-17. Select vendors, wineries, breweries and restaurants will be featuring their fare and performing cooking demonstrations. Carmel’s own culinary celebrity Ted Allen along with another famed food television personality Hugh Acheson will be in town for this interactive experience for the hard-core foodies.

Allen, a 1983 Carmel High School graduate and member of the CHS Alumni Hall of Fame, doesn’t get back to his hometown too often, though his mother is a resident of Carmel near the high school where he was raised. He has been a guest speaker at a few local special events over the years. He spoke at the “Creme de la Carmel Fundraiser,” an art exhibit and silent auction that benefited the Carmel Clay Public Library in 2012. When approached with the opportunity to be one of the festival’s headliners, he “jumped at the chance to come home.”

Prior to his most recent success as host of Food Network’s “Chopped” and as a published author of two cookbooks, “The Food You Want To Eat: 100 Smart, Simple Recipes” and “In My Kitchen: 100 Recipes and Discoveries for Passionate Cooks,” Allen earned a degree in psychology at Purdue University, although he had a passion for journalism.

His first job was as a sports writer for the Lafayette Courier Journal. He enrolled at New York University where he completed his master’s degree in journalism. Allen moved to Chicago where he was eventually offered a position as a reporter for a Chicago-based newspaper. He became a member of the locally renowned group of restaurant critics known as the “Famished Four.”

Allen has also been a contributing writer for Esquire Magazine, contributing articles on the delectable delights in the food and wine world. Allen also received the James Beard Media Award in May 2012 for his work as the host of Chopped, and the show itself also won for best in-studio television program.

His introduction into the world of network television shows and reality TV began with a role on the Bravo TV series “Queer Eye for the Straight Guy” and has appeared on several hit shows since such as “Uncorked: Wine Made Simple” and “Top Chef.” He expressed that his early passion for research and writing plays a role in his current projects and that every job has contributed to where he is today.

“Every job that I have ever had is essential to what I do today,” Allen said. “You have to be open to weird opportunities. It is very exciting to do TV. You have to reach a very large audience, and you get paid well.” In his spare time, he enjoys spending a Sunday afternoon with a bottle of wine, a group of his close friends and cooking in the kitchen.

When asked about the current trends that he sees prevalent in the culinary world today, Allen responded, “There is a trend in good cooking that is not confined to metropolitan areas like New York City or San Francisco. You can get a great organic burger in more local places, like Noblesville, Indiana. I can remember when it was difficult to find quality ingredients and even olive oil in this area. Now local places like Joe’s Butcher Shop offer grass-fed beef.”

Festival-goers can enjoy the ambiance and entertainment, provided in part by Allen and Acheson at the Fantastic Food Fest, 11 a.m. to 6 p.m. each day. The festival is sponsored by Indiana Grown, the Indiana State Department of Agriculture’s “buy local” initiative. Tickets cost $15 each. Visit fantasticfoodfest.com or call 317-708-4401.