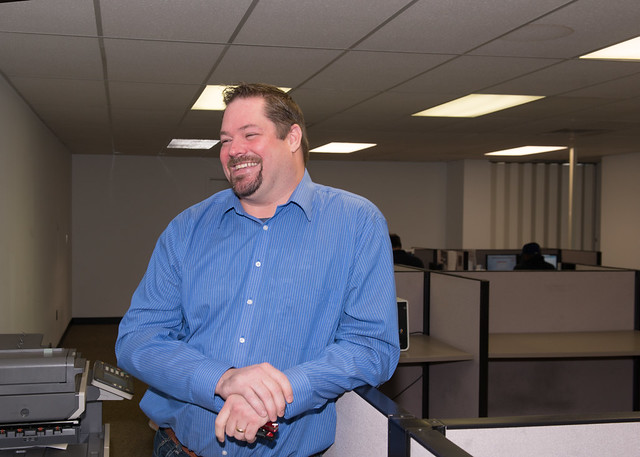 Proving that the most effective way to market our businesses is through good old-fashioned networking, Tom Wagenhauser, president and CEO Techlocity and HelpDesk.net (WhatIsHelpDesk.net) located in Fishers, attributes his networking efforts to his companies’ recent success.

Wagenhauser established Indy IT Professionals in 2010 and was a “one-man band” operation working out of a mere 400 sq. ft. Due to the growth of his company, IT Professionals underwent a name change to Techlocity, a clever combination of technology and velocity. Techlocity provides IT solutions with a variety of plans tailored to companies’ needs and goals. They provide exceptional support at any level. Their Managed Services include remote monitoring and management, 24/7 support, proactive maintenance, hardware and software asset reporting and license management.

Waggenhauser created HelpDesk.net under Techlocity’s umbrella to offer outsourced “Help Desk” support that is maintained by a dedicated team of Wagenhauser’s staff.

“After the market crash of 2008, I saw an opportunity to start my own business,” Wagenhauser said. “Typically when there is a downturn in the market and at the magnitude that we experienced then, we see people downsizing their workforce, especially technology positions. They consider outsourcing many of those positions as a cost savings strategy. My background is in the small and midsize business market, and I usually work directly with an owner. My goal was and continues to be to make the most of their technology with a conservative budget.”

Since 2010, Wagenhauser has expanded his company, nearly doubling his workforce each year. He attributes his growth and success to providing excellent service to his customers and to the vigorous networking that he and his associates engage in.

“Our core focus is on sales efforts, referrals and providing excellent support,” Wagenhauser stated. “In the beginning, we didn’t have a sales team. It was me attending networking events, Chamber events and currently OneZone events. I was active in the former Carmel and Fishers Young Professionals events and was the Board Chair of the Fishers Chamber YP group. These events allowed me to get my name out. I have always felt strongly that the more I attended these events, the more people would become familiar with me and feel comfortable doing business with me.”

Ultimately, that is exactly what happened. Techlocity got their “big break” after attending the Taste of the Chamber Business Expo in 2014. An attendee picked up one their cards from the HelpDesk.net booth and contacted Wagenhauser two months later. This particular corporation was interested in Wagenhauser’s ability to provide their company outsourced, after-hours support and have it ready within 30 days. The two companies reached an agreement, and within a month, Wagenhauser had hired the necessary personnel dedicated to that account and had the systems in place.

Three months later, the same company’s internal business units offered Wagenhauser and his team the opportunity to take on their Canadian operations which would require a staff member who was fluent in both English and French. Shortly after this growth spurt, Wagenhauser was contacted by another local large company that would add seven more people to his staff. He currently employs 36 in their 7,000 sq. ft. facility. Despite the serious nature of their business, the staff enjoys a relatively casual work environment, complete with Nerf gun battles to alleviate stress and enhance a healthy sense of teamwork and competition.

Wagenhauser stressed that he does not put a huge emphasis on certifications and degrees when he hires his team members.

“The Help Desk people that we hire are classically trained,” Wagenhauser explained. “We’re hiring people that have a minimum of one to two years of experience. They will be able to produce more results and get the tickets completed more quickly, ultimately doing more in the same amount of time it would take someone with less experience. I look for a jack of all and master of none when I am interviewing engineers. They need to be strong in problem solving and be versatile. I look for candidates who have had multi-client type experiences. We have a total of six great engineers and an incredible administrative and after-hours team.”

If your company, regardless of size, is interested in learning more about Techlocity, HelpDesk.net and their many best-in-class service offerings, from Managed Services to IT Infrastructure implementation, visit techlocity.com.