The Lazzara family has been part of the Carmel community for more than 35 years, long before Mayor Brainard took office in 1996. The family has made a lasting mark on the community and continues to invest and support the development and redevelopment projects as the years unfold. Now the community is awaiting the completion of the latest building project, Monon & Main, a mixed-use development that will feature an upscale steakhouse, office and retail space, townhomes and a pocket park. Chuck Lazzara, co-owner of Ritz Charles, and his son, Anthony Lazzara, owner of Anthony’s Chophouse and 3UP, announced their newest venture in 2016. 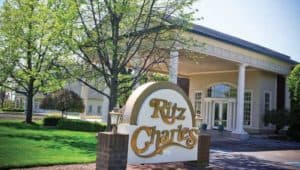 Let’s take a quick look back at the Lazzara’s history in Carmel. Chuck and his wife, Lynn, opened the Ritz Charles located on Meridian Street in 1985. Over the years, the event venue has hosted countless upscale events for families, schools, corporations, civic leaders and nonprofits. The Ritz Charles employs 174 people, full and part-time, 15 of which are approaching their 20th anniversary with the company. Last month, Chuck was presented with a Lifetime Achievement Award by OneZone for all of his accomplishments and contributions over his career in Carmel.

Chuck’s eldest brother, Tom, has been a realtor in the city for almost 40 years and, over the years, was purchasing properties on and around Main Street and the Monon Trail. Chuck purchased the lots from Tom that are now the Monon & Main development.

Lynn’s brother, Matt Frey, is the owner of Bub’s Burgers & Ice Cream that opened along the Monon in 2003, across from the new Monon & Main site. Chuck’s youngest brother, Joe, is the owner of Joe’s Butcher Shop and Fish Market that opened in 2006, and Joe’s Next Door opened in 2016, also located on Main Street within a few short steps of Monon & Main. 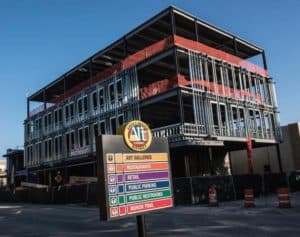 Now the Lazzaras are constructing their latest project, a 12,000-sq. ft. steakhouse and seafood restaurant, Anthony’s Chophouse and 3UP, as part of their Monon & Main development. The development will also include townhomes for sale along the Monon Trail, a public plaza and office and retail space. The grand opening of the restaurant and rooftop bar is projected for late spring 2018.

Reflecting back over the last decades, Chuck shared his story as well as his insights for the future of Carmel. “We were already ingrained in the future of Carmel back in the late 1980s-90s,” Chuck said. “My business was taking off, and the vision that we had ourselves during that time actually mirrored with the Mayor’s [Brainard] vision back in 1997. We were pretty much on the same path. We also knew that our investments in the city were going to go a lot further than just the Ritz Charles on Meridian Street.”

Chuck and his wife, Lynn, were the only game in town for several years as the premier event venue in Carmel. By 1997, there were additional venues in the area and options for people to choose from. The Lazzaras were already ahead of the pack, adapting to the changing environment and growing city.

A chapel was built as part of the facilities for the Ritz Charles in 2005, and the Pavilion was added in 2007. Since then, the Lazzaras have continued to upgrade their facility and services to keep up with changing trends.

“We’ve stayed our path, but we keep moving forward, always looking for other opportunities,” Chuck said. “Our vision combined with the Mayor’s vision. We saw the developments of Midtown and City Center coming together and being implemented. Our goal when we were buying that square city block downtown along the Monon initially was an investment and not as much as a development.

“It became clear after 2010 that we wanted to build more of a family legacy that we could pass on to our children and to their children. Originally, we were looking at putting a restaurant in the middle of the lot and some parking and a park. It was the Mayor’s vision that made us leap to the next level. It became more than just a restaurant but a grand entrance into the Midtown/City Center project. It will be more than just a restaurant and another business.”

Chuck’s son, Anthony (Tony), spoke about some of the measures that were mindfully taken to ensure that the development would be pleasing to his customers as well as people passing by along the Monon and Main Street.

“We thought a lot about what we could do that would be good for the city, the people that live here as well as what was going to work best for the restaurant and the entire block,” Tony said. “The restaurant is going to be set back 45-feet from the new Monon Boulevard that is being put in, and we raised the patio level of the restaurant three feet, so people will be above the Monon Plaza, which will provide more intimacy and seclusion. The view looking out from the restaurant will be of the heart of downtown Carmel and not a view of being pushed up against other buildings and the Monon. The Monon Plaza will give people an open area to enjoy.”

Chuck added, “We designed the plaza and park with the intent that the citizens were going to benefit not only with the restaurant and the amenities that we are including but the additional parking, the garage, the townhomes along the Monon and the plaza. People will still be able to use the plaza for civic-oriented events. We worked hard at making that happen.”

When asked why he thought so many young people are moving to Carmel or back to it, Tony shared his observations. “Honestly, I’ve talked with a lot of people and friends who think that Carmel is expensive to live in,” Tony shared. “The cost of living here is actually reasonable. Once people buy in and understand what the City is doing for its population, the lifestyles that it is creating, people begin to get it.

“The City provides a safe environment with all of our public safety agencies, great schools and lots of options for schooling. The health care in this area is some of the best in the country. People realize that this is one of the best places to be in the country, and the community supports its businesses, small businesses, like Bub’s and Joe’s.”

No worries, Tony. The community is looking forward to supporting you and your endeavors as well.