Statistically, one in eight women will get a breast cancer diagnosis in their lifetime. Susan G. Komen has a bold goal of reducing the current number of breast cancer deaths by 50 percent in the U.S. by 2026.

Susan G. Komen Central Indiana saves lives by meeting the most critical needs in our state’s communities and investing in breakthrough research to prevent and cure breast cancer. This year, Komen Central Indiana invested $832,677 in 15 local breast health programs that reached 40,000 people and provided 20,000 services within a 41-county service area. 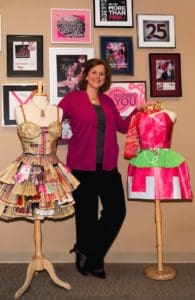 The organization recently welcomed its new executive director and Carmel resident, Jill Madinger. Madinger joined the team at Susan G. Komen Central Indiana in October. She replaced Natalie Sutton, who served in the role for more than three years.

“We are pleased to have Jill join the Komen team,” said Komen Central Indiana Board President Tory Castor. “Her executive leadership, fundraising ability and experience engaging volunteers in meaningful ways make her uniquely qualified for this role. She will be a welcome addition in our fight against breast cancer.”

Madinger has experience developing and implementing strategic sales, marketing and mission initiatives, delivering high-impact solutions that advance organizational goals. Most recently, Madinger was Executive Director of Million Meal Movement, a nonprofit organization dedicated to feeding the hungry in Indiana and offering meaningful volunteer experiences for community members. She also served as the Senior Director of International Growth and Education at Kiwanis International and Account Executive at Pillar Group Risk Management.

“Breast cancer knows no boundaries as far as gender, race, economic situation or geography. It’s all-encompassing,” Madinger stated. “When we come together for the cause to find cures, we all have a stake in this. We all know someone who has been affected by this disease. I think you’re hard-pressed to talk in casual conversation with someone who doesn’t know someone who has been diagnosed or is a survivor or was taken by the disease.”

Madinger emphasized that Komen Central Indiana plays a significant role in the local efforts to provide support and services to those who are fighting the disease in Indiana.

“I think a misunderstanding of the Susan G. Komen organization is that most people see us as just a huge breast health research organization, and we absolutely are; we are the largest funder for breast health research. However, locally, we are also the organization that gives grant dollars to Little Red Door, so the woman who does not have insurance and maybe doesn’t have the family support system can get the care she needs, get the continuum of care and navigate this very complex system.”
According to the data provided by Komen Central Indiana, 75 percent of the net proceeds raised through Race for the Cure® stays in the local communities to help fund programs like screening, diagnosis and treatment services, safe and accurate breast cancer information and patient navigation programs. The remaining 25 percent of net proceeds go towards national priorities, such as new early detection technologies, understanding of metastasis and how to treat and prevent recurrence and more effective treatments.

The organization puts on several annual fundraisers that raise critical funds to support its mission of saving lives by meeting the critical needs in the communities that it serves and to continue investing in breast cancer research, prevention and a cure. The annual Race for the Cure® is, by far, their largest fundraising mechanism.

The 25th annual Komen Central Indiana Race for the Cure® took place in April 2016 and raised $1,153,500 with 13,217 participants. Sponsors, teams and top fundraisers came together to make it the largest event for the organization that year. Due to unprecedented lightning and severe weather conditions, the 2017 Komen Central Indiana Race for the Cure® was cancelled, causing a detrimental set back to the overall fundraising goal and 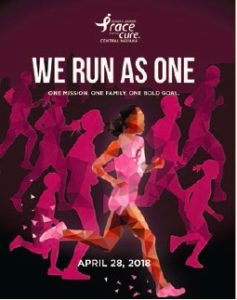 creating a shortfall for 2017.

“The race is our largest funding mechanism. It represents 65 percent of our operating budget, which includes the grants that are able to fund other organizations,” Madinger explained. “There was approximately a $200,000 shortfall as a result of the race being cancelled due to the lightning.”

It was the first time ever that the race had been cancelled, and due to its scope and sheer logistics, it could not be rescheduled for another time in 2017. The figure that the Komen Central Indiana is using to discuss the human aspect of the shortfall is 10,000 individuals who were not able to receive the services that the organization would have otherwise been able to provide them.

“The cancellation of the race had tangible financial implications, and then it had intangible implications,” Madinger said. “It was both an emotional loss as well as a financial one. It is a time for unification for the organization, the survivors and for the ones who are battling the disease. It’s a time for them to come together and feel that unity. My goal for this year is a dry and beautiful day for the 2018 race.”

Madinger is looking ahead at developing additional fundraising mechanisms to make the organization less dependent on Mother Nature’s good graces.

“When you’re so dependent on events and you have an electrical storm that forces you to cancel the main event, you recognize that revenue model needs to be revisited,” Madinger elaborated. “We will be focusing on other mechanisms for fundraising that will include individual giving and large gift planning. I see this as a great opportunity as we continue to do these events and keep the train on the track while looking at additional fundraising opportunities to continue to support our grantees.”

Through outreach and networking events in the organization’s 41-county service area, special programs and partnerships with other local organizations, Komen Central Indiana connects individual needs with available resources to empower Hoosiers and maximize the impact of its mission. Its other significant and engaging events include the Pink Tie Ball, Circle of Hope, Pink Ribbon Celebration and Project Pink. 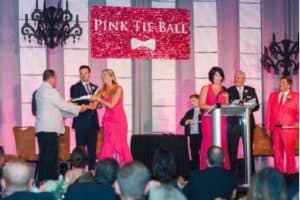 Project Pink is the organization’s annual fashion show fundraising event. In 2017, it celebrated the sixth anniversary of the event with 10 models who raised awareness about breast cancer and fundraising in support of Komen Central Indiana’s mission.

The 2017 models also compete in a friendly fundraising competition leading up to the event. The model that collected the most donations was presented with the 2017 Trendsetter Award.

Komen Central Indiana’s community impact initiatives include, but are not limited to, Cancer Resource Center at IU Simon, Coffee with Komen, Sisters in Pink, Indiana Cancer Consortium and More than Friends.

Madinger and her staff are proud to serve central Indiana community members in meaningful ways that give survivors the strength needed for today, raise awareness and education about breast cancer and push research forward, offering hope for tomorrow.