Sun King is Tapping into the Spirit World

In the not-so-distant future, the city of Carmel will add Sun King Distillery to its list of attractions and “things-to-do.” Having built up a stellar reputation for its craft beers, Sun King is expanding its footprint and its business model to include distilled spirits under the direction and talent of its Co-founder Dave Colt. 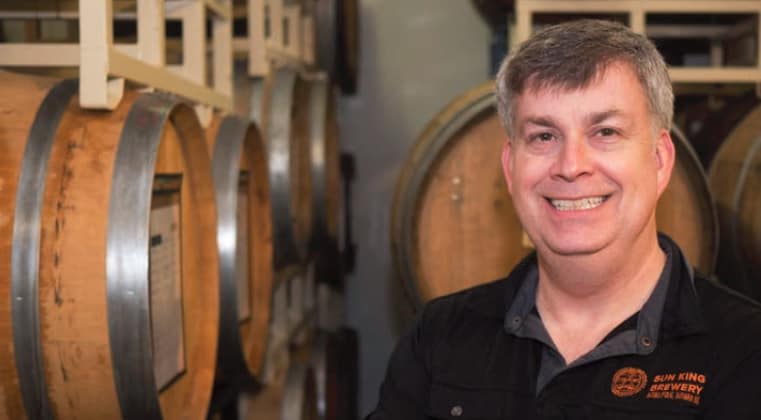 Colt has been working as a bartender, manager and brewer in restaurants around the Indianapolis area for over 20 years. In 1996, while he was the bar manager for Circle V Brewing Company in Castleton, Colt was first presented with the opportunity to learn the art of brewing beer. When RAM Restaurant & Brewery opened in the summer of 2000, Colt joined the RAM team and eventually took over brewery operations as the head brewer in 2002.

He left the RAM to open Sun King along with co-worker and co-founder Clay Robinson in 2009. Since its inception, Colt and Robinson have earned more than 35 national awards at Sun King Brewery. Sun King Brewery has also been awarded six FOBAB National Wood-Aged Beer Completion awards. Colt completed his distiller’s education working with the world-renowned distillers at the Distilled Spirits Epicenter in Kentucky and is eager to get Sun King Distillery open for business.

Why a distillery and not another brewery?

“Distilled spirits are something that I’ve always enjoyed,” Colt said. “I’m a bourbon guy, but I also enjoy tequila, margaritas and all of that good stuff. When we were originally looking at expanding our brewery footprint, it was with the knowledge that there is this whole 96th Street thing where some people don’t drive south of it, and others won’t drive north of it. We acknowledged that there was this untapped market that we needed to address. We were also coming up against the 30,000-barrel limit, so we started poking around neighboring municipalities like Fishers and Carmel.”

Colt said that he and Robinson sat down with both Mayor Brainard of Carmel and Mayor Fadness of Fishers, asking if the brewery would be a good fit for the respective communities and if there were any spaces available to them.

“Mayor Brainard was very generous with his time,” Colt recalled. “He [Brainard] didn’t know where we could put a brewery at that time; we needed several acres. We also talked with Mayor Fadness. He had a location that was available to us, and we were able to open another tap room in Fishers.”
As the Midtown redevelopment plan continued to grow and new phases were underway, Colt and Robinson were approached by Justin Moffett of Old Town Development.

“We were approached by Justin about opening a distillery in Carmel’s Midtown,” Colt said. “We hadn’t really thought about it, but as we were watching the pieces come together in Midtown – this was about two-and-a-half years ago – we thought, ‘Why not?’ and decided that we should.”
“Originally, the idea was to develop a food court concept similar to the Indianapolis City Market,” Colt explained. “Sun King Distillery would’ve been there as sort of a ‘value-add,’ but as the project morphed, it turned into an opportunity where we would be in our building, and the project took off from there.”

With the wheels in motion, Colt headed down to Louisville, Kentucky, where he enrolled at Distilled Spirits Epicenter. There he gained experience in the time-honored craft of distilling.

“The first thing the instructor said after the introductions and pleasantries was, ‘All brewers are quitters,’ and I was like, ‘Hey, that’s not nice.’ He explained that brewers are [quitters] because we only got halfway through the process. Distilling is the entire process. Brewing is a good stopping point, and the instructors acknowledged that, but they had their fun getting a rise out of the brewers.”

Colt went on to explain that distilling craft spirits is similar to the evolution of craft wine in the 1980s-90s and of craft beer in the 1990s-current day.
“It’s something that you’re going to see a proliferation of in the coming years,” he predicted. “We were halfway there and had been barrel-aging beers, so now we can trade barrels back and forth between the distillery and the brewery. How fun is that?”

The construction of Sun King Distillery is ongoing, and Colt is guardedly optimistic that, Indiana weather-permitting, the grand opening of the distillery will be late May/early June.

“When people walk in the main door off of the beautiful courtyard that is being designed by the city of Carmel, they will see areas that are designed for relaxation and for people to hang out. There will be a space that will be the 21-and-over bar area with different styles of seating. The overall design is going to be different. We’re bringing a concept to Indiana that we fell in love with out in Colorado. It is an upscale reinterpretation of a ‘food court.’

We will have four excellent food concepts within the space. We will offer popular food items that will be created and prepared by local chefs. There will be something for everybody, and of course, we will have all of our beer available. It will be pretty awesome.”

Sun King will offer 12-15 of its beers at the distillery and will also have guest distilled spirits from other regional artisans to help sustain the supply as Sun King is distilling its products. At the time of the opening, Sun King will have recently put aside its bourbon to age over the next four years.

“We will tap some local folks who make outstanding products,” Colt said. “We will have signature cocktails and seasonal offerings too. We have a Mexican lager, ‘Pachanga,’ and we will be making an agave spirit (if it’s made in the U.S., it cannot legally be called Tequila), so we will have ‘Pachangaritas.’ What we will have at our opening depends on how much product we get knocked out as we are producing as much as possible while under construction. We plan on making just about everything under the sun except for vodka. Vodka is a very specific product, and we don’t have any plans on making any at this time, but we will be tapping into other local producers like Cardinal Spirits. We will make rye whiskeys, gins and agave and will get around to making cordials and other infusions as we progress.”

When questioned if distilling puts producers “on the map” the way that some successful breweries have put Indiana on the national stage, Colt replied that distilled spirits is a fledgling industry.

“One of the goals of Sun King when Clay and I first started out was to make world-class beer and put Indiana more on the map,” he said. “We’ve had a great Indiana brewery, Three Floyds, leading the charge. Upland is another brewery that has been around a while. Distilled spirits is such a fledgling thing that I don’t think any one state has a claim as being the mightiest and best distillers on the planet. For Sun King Distillery, it’s more about the quality. Quality is our number one priority.”