The Carmel Clay Schools are asking for your votes. A replacement “Operational Referendum” will be up for a vote on Tuesday, May 2, in a special election. Absentee voting begins April 10th. Early voting will be held April 22nd and April 29th. The current referendum that passed in 2010 will expire December 31, 2017.

Dr. Nicholas Wahl, superintendent of the Carmel Clay Schools, explained what the replacement referendum will do for the schools. “The 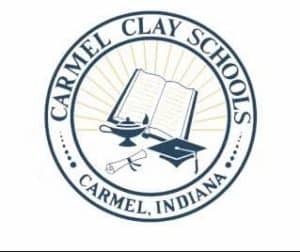 replacement referendum will not allow us to do anything new,” WahI said. “It will simply allow us to continue to do what we do best – fund high quality academic and extracurricular programs as well as recruit and retain quality teachers and staff.

“Carmel’s per pupil funding is the second lowest in the state, $786 less than the average student,” he said. “The referendum that was passed in 2010 filled that gap and enabled us to maintain our programs. We are recommending a replacement referendum, literally, to maintain what we are doing. This is an Operational Referendum, which is for people and programs. It has nothing to do with bricks and mortar.”

A brief history on the referendum: In 2009, Indiana legislators reformulated how public education is funded, which had two major consequences. First, Indiana essentially became a ‘referendum state’ where school districts are now forced to pass regular referenda for a workable amount of funding. Second, Carmel Clay schools now receive the second-lowest per student funding amount in the state. In 2010, the Carmel community responded to this inequity and approved an Operational Referendum. This referendum is set to expire December 2017.

Monies from the referendum will go directly to the district’s General Fund, which is used for operating expenses such as salary, benefits, supplies, and utilities. Ninety-four percent of the General Fund is used for staff salary and benefits. The General Fund is one of six funds that make up the Carmel Clay Schools budget. The other funds are Capital Projects, Transportation, Referendum, Debt Service, and Bus Replacement. State law prohibits transferring monies between the funds.

Voters passed the previous referendum to fill the gap in the state-funding formula created the previous year. Since then, five of the six school districts in Hamilton County have passed similar referenda.
Carmel’s proposed school tax rate is the lowest in the county. The proposed rate would be $0.19 at $100 per assessed property value, keeping the school tax rate at $0.83.

Wahl explained that if the referendum does not pass in the upcoming special election, Carmel Clay Schools must consider eliminating 260 teachers and staff, which would result in significantly larger classes. Non-required academic programs like AP and dual-credit courses would also be in jeopardy as well as extracurricular programs like sports, performing arts, and school-sponsored clubs. “We are a referenda state,” Wahl said. “Foundationally, that is where we are as a state.” “We want our students to become college, career, and life-ready, and I believe the best place to do that is in the public-school arena.” “At the high school level, we will have to evaluate all programs not required for graduation,” Wahl stated. “At the middle schools, we will have to review the interdisciplinary teaming, Core Plus, all of those great things that we’re doing with the electives at the middle schools. At the elementary schools, we would have fewer teachers and higher class sizes. We would also see higher class sizes at the high school and middle schools.”

Wahl has been advocating on behalf of the schools and speaking with Carmel residents to answer their questions and garner their support on May 2. “I’ve been speaking with the community about the facts but, secondly, to stress that strong schools equal strong community. If anyone wants to maintain their property value and increase it, a ‘yes’ vote is for their own property and community. A vote ‘yes’ will maintain that strength that they’ve become accustomed to. Awareness and education are key for the success of this referendum.”

Wahl has testified at the State Senate to encourage them to make an eight-year window between referenda, not a seven-year. Currently, the window doesn’t line up with the general or primary elections. Hence, the special election that will be held on May 2nd. 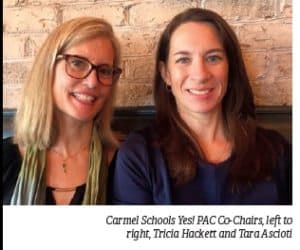 The school district has received a extraordinary amount of support from the Carmel Schools Yes! Political Action Committee (PAC), whose goal is to pass the 2017 Operational Replacement Referendum for Carmel Clay Schools. The PAC co-chairs, Tricia Hackett and Tara Ascioti, have been disseminating information to encourage voters to pass the replacement referendum.

Wahl offered his opinion on the health of Indiana public schools. “Until people start talking about public schools and the value of them in the same sentence, we’re going to have challenges,” he said. “I think the public schools offer the most opportunities for families regardless of your stage in life. Moving away from that value is very concerning to me as a 30-year educator and a 15- year superintendent because I see the value of public schools,” he said.

“We want our students to become college, career, and life-ready, and I believe the best place to do that is in the public-school arena. We take all kids. No other entity trying to get into the game of educating students, Pre-K through 12, can say that they take all kids no matter what. Public schools can say that, and until somebody else steps up and shows another way to do that, I’m going to advocate for public schools.”

Wahl also expressed his gratitude to the parents, individuals, and organizations that support the Carmel Clay Schools and how he views their partnership roles. A strong community rests upon four pillars. The pillars represent government, businesses, citizens, and public schools. It needs all four of those pillars supporting one another equally. Wahl concluded, “When we weaken the public-school pillar, all remaining three are affected.”