Still Serving After All These Years

The public can be fickle when it comes to where they choose to spend their recreational time and money. As a result, entertainment and sports facilities sometimes wane in popularity and close their doors. Most recently, Five Seasons Sports Club in Carmel announced it is closing, despite its high visibility along I-465.

So, what would account for the more than 50-year run of the Indianapolis Racquet Club at 82nd and Dean Road? Could it be the man that runs it?

Ed Brune came to Indianapolis from Cincinnati in 1963 armed with a degree in Philosophy, a master’s in international relations and a law degree. With that education, he was suited for a job in the foreign service or even as a partner at a law firm, but his passion for tennis guided his career decisions.

He taught at what is now Park Tudor School for a bit and, having played Division I tennis at the University of Cincinnati, also taught tennis at the Woodstock Club.

When the Indianapolis Racquet Club opened in October 1965, Brune was the General Manager and Tennis Director and has helped the club ever since. Back in those days, the club was not open in the summer. There were only four courts, and just six people were enrolled in the first class. Fast forward to today, and there are 14 courts and 27 tennis pros teaching classes and running leagues for 3,000 players.

Brune, who lives in Carmel, says the IRC is the largest indoor club in the Indianapolis area and benefitted from a tennis explosion. “Along 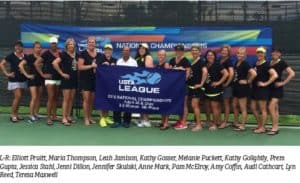 about the mid-70s as the result of the pros and amateurs competing against each other, tournaments became very marketable.

“We hosted the RCA Championships here, so we had John McEnroe, Jimmy Connors, Manuel Orantes and Arthur Ashe. They all played here,” says Brune.

The RCA Championships, considered one of the best tournaments in the world by the players themselves, moved to the Indianapolis Tennis Center downtown on the campus of IUPUI. That facility was demolished years ago after the tournament folded, but the IRC is alive and well.

“We’ve been fortunate,” says the 80-year-old Brune who adds, “We have a team approach.”

One of the most important people on that team is Prem Gupta, a tennis pro who has been working with Brune at the IRC since 1968. Gupta played tennis in India as a youth. “One of my friends said, ‘Why don’t you come play tennis?’ I didn’t know what tennis was,” he says.

He arrived in Indianapolis from New Delhi to work at a tennis camp, received a work visa and wanted to stay. Brune recalls that it took a private Congressional bill to change the quota which allowed Gupta to remain in the U.S. permanently. He reminisces about traveling to Chicago with Gupta to stand up for him before a federal court in order to get his permanent visa. Gupta has long since become a U.S. citizen.

At any given time, Gupta has total responsibility for as many as 45 teams consisting of 13 to 18 people per team and works as many as 60 hours per week at IRC. Over the years, his players have won eight national championships. He proudly says that he was the first coach to put a tennis racquet in the hands of Indianapolis tennis great Todd Witsken, and he taught Carrie Meyer who attained a career high world ranking of No. 14 in her singles career. 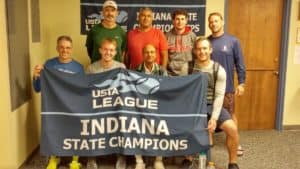 At 72 and still teaching tennis, Gupta loves the sport. “With tennis, you can play for a couple of hours and get good exercise, and it’s good for your health,” he says. He adds that for kids, sports such as soccer are good, but tennis is better. “You can play as a kid and until you are 90 years old,” says Gupta.

Brune calls tennis a lifetime sport but says getting kids interested is a challenge.

“What it is is there are so many choices. Our biggest competitor right now is soccer, not another tennis club, so we try to get as many kids playing at the youngest age possible before they get too good at playing soccer,” he says, adding that tennis doesn’t attract as many good athletes as it might.

“It requires a lot of training, and you’ve got to travel. It’s expensive.” But he thinks it offers more than a sport like a soccer. “I’m a little prejudice about that. You have to be an independent thinker. It’s not a team sport. You’re out there all by yourself. You’ve got to figure out the game plan,” says Brune.

Tennis is certainly a family sport for the Brunes. Ed and his wife, Jane Ann, have three children and nine grandchildren, and all of them with the exception of the ones too young to play yet are active in the sport. In fact, a 14-year-old granddaughter has a Midwest ranking, and Brune says he has a grandson that is so good at the age of 9 that he expects to see him playing at Wimbledon in 10 years or so.

At a very fit 80, Brune is himself a living advertisement for the sport. He still teaches, coaches and plays and, like his club, is going strong with no signs of slowing down. “I enjoy the game. I enjoy working with people and seeing them improve.”

Check out the story about Junior Camps at IRC