In the wake of the announcement that the Center for the Performing Arts and the Great American Songbook Foundation were saying farewell to their previous President and CEO, Tania Castroverde Moskalenko, comes the renewed sense of steadfastness and enthusiasm for the Center’s future with the naming of an interim president and CEO.

The Center’s board of directors named Jeffrey McDermott as interim president/CEO. McDermott brings the necessary qualifications to the position, along with collaborative leadership and years of experience in management, business growth and problem solving. McDermott is a 30-year resident of Carmel along with his wife, Britt, with whom he shares four children.

McDermott joined the board for the Center for the Performing Arts in 2010, prior to the opening of the Palladium. He has since served the Center’s board in multiple capacities, including as a member of its Executive Committee, Development Committee, Audit Committee, Finance Committee, Governance Committee and as its legal counsel. McDermott and his wife also chair the Center’s 2016 Songbook Celebration gala, coming up Oct. 15. He joined the board for the Great American Songbook Foundation as its second board chairman in 2011. McDermott has been a practicing attorney with Krieg DeVault for over 30 years. He is the first and only executive partner of Krieg DeVault’s Carmel office.

McDermott sat down with us and discussed how he initially was invited to join the board and become involved in the Center, as the world-renowned Palladium was under construction.

“I was asked to sit down with Mayor Brainard, Rollin (Rollie) Dick and others who were initially involved in the board’s formation,” McDermott said. “I was 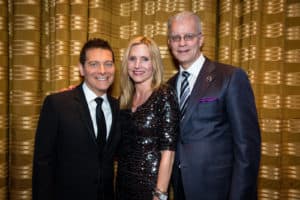 asked if I would have an interest in joining the board and I recall feeling a little reluctant at first only because I do not have an arts background. I was really supportive and interested in what they were doing. I thought that the Center was really a phenomenal opportunity for this community and for central Indiana. I had rolled off of another significant board and was looking for something new and different to provide service to. I decided to accept the invitation to the board and get involved. What I didn’t expect was how much that I would enjoy the mission and the people.”

McDermott was quick to praise his fellow board members for their high level of talent and dedication to the Center’s mission.

“The board is unique and is a hard-working board,” he stated. “It is highly committee-structured. You don’t get on this board to build a resume. You get involved with this board because you care and you want to really make a difference. I’ve never believed in joining something unless you plan on really getting involved. By virtue that it’s associated with the arts, you engage with your fellow board members at all kinds of functions. You get to work on something that is putting on performances for the good of the community and then get to enjoy it with your fellow board members and see your work in action.”

Reflecting back on Moskalenko’s arrival and tremendous legacy, McDermott asserted, “Tania came in at a time that there were some challenges, and she dove right in. She underwent her ‘100-day assessment,’ then began implementing her plans. She put two strategic planning processes together, one for the Center and another for the Great American Songbook Foundation. She added a lot of needed governance and focus to what we were doing. When she came in, we were a young organization, not even two years old, and needed to mature. She put a remarkable team together and we have great people at the Foundation. One the things that has been eye-opening to me, in a positive way, is coming in as a board member of six years and having an entirely new perspective in this interim position. I went from a 5,000-foot vantage point to a 5-foot and now see our team’s, many of whom have been here from day one and those that Tania brought in, dedication and collaboration for what we are doing. These people are here because they are passionate about it and they love it.”

McDermott admitted that it was different for him coming into the position than it was for his predecessor.

“I sometimes tell people that it’s an ‘intern’ position because there is a learning curve,” he said. “I think that it has been a fast learning curve for me though, because there are a lot of great teachers here. The assessment side isn’t quite necessary now because we have the right people in place who know what they are doing and are committed to doing it. The linkages between programming, marketing development and finance are already there. There are plans in progress that I am moving forward with. I don’t view that my job is to come here and tread water. It is to keep the momentum moving forward.”

As the celebration of the Center’s five-year anniversary comes to a close, the enthusiasm and planning continue. McDermott shared his thoughts on what patrons can expect in the next several months.

“We are growing and have some new opportunities to add to our already robust programming where we have some openings,” he said. “We launched the season in mid-April, but at the time that we launch, we are still in negotiations with some artists and there are a lot of moving parts to that. We’ve got some dynamic things that we’ll be announcing to add to the season that will continue to balance it out. We deliberately work to create a balance within our programming and offer something for everybody. While we’re a nonprofit, it doesn’t mean that we’re not a business that has to be good stewards and bring what we can present in ways that make economic sense but that also drive the mission. We’ve got some other plans in the works as we continue to enhance the affiliation between the Great American Songbook Foundation and the Center. We will continue to collaborate and utilize the advantages that are mutually beneficial to one another.”

Joining the conversation was the Center’s board secretary, Anne Poindexter, a member attorney with Altman, Poindexter & Wyatt, who joined under Moskalenko’s term.

“I suppose, as some of us found out, that there was at least a moment or two of anxiety upon learning of Tania’s leaving,” Poindexter said. “As soon as someone expressed the idea that Jeff might be willing to consider one more hat, beyond those that he was already willing to wear, all of us lost any ounce of anxiety about what we were going to do and how we were going to plan for her departure. Without question, although there is an absolute commitment from all of the board members, from my perspective there is no other individual that has any greater depth of commitment and enthusiasm for the mission of this organization than Jeff does. As a practical matter, the first five years are a critical time for any organization. That’s a simple fact and we are beyond the first five years. We’re at a good point and we’re moving forward.”

“You can’t be a young organization without having some growing pains and finding your way,” McDermott concluded. “Our board and staff continue to grow stronger, and the community is beginning to realize that what the mayor and the supporting city council members said would happen with regards to the Center is happening. The Center would not just be a world-class facility. It would be an economic driver for the community. What they said would happen, has happened.”