Standing Together in Solidarity:

The residents of Carmel, Indiana and the local religious community woke up to the news of vandalism on July 29, 2018. The property of Congregation Shaarey Tefilla had been defaced with a pair of painted Nazi flags and iron crosses on Saturday, July 28. According to U.S. Attorney Josh Minkler in his press conference, the anti-Semitic graffiti was intentional and was “not a prank.”

Federal and Hamilton County authorities announced the arrest of two individuals, Nolan Brewer, 20, of Cloverdale, Indiana, and a 17-year-old female co-conspirator on August 16 in a press conference that included the U.S. Attorney, the FBI, Carmel Police Department, Carmel Mayor Jim Brainard and Rabbi Sendrow in attendance. The aforementioned agencies worked collaboratively and diligently until the arrests were made.

Prior to the arrests, a Community Solidarity Gathering was held at Congregation Shaarey Tefilla in Carmel on July 30 where more than 1,000 community leaders, 20 groups representing a diversity of faiths and organizations and Hoosiers came together in a massive display of support for Rabbi Benjamin Sendrow, Congregation Shaarey Tefilla and the Jewish community as a whole. “These people tried to instill fear, and they tried to incite hatred,” Sendrow stated after the arrest. “But it was a complete failure. What they did was awaken a sleeping giant of love, mutual respect and solidarity.” 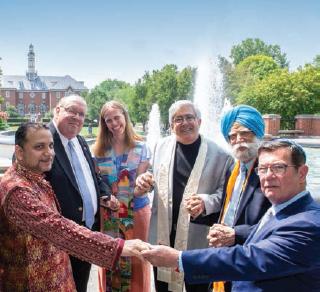 In attendance that evening were several members of the Carmel Interfaith Alliance, a coalition of faith traditions in Carmel whose purpose is working together to build understanding and service for the city that is home to people of many faiths.

“It was an intentionally planned thing that they [Brewer and the co-conspirator] were trying to do,” said Rev. Jerry Zehr at Carmel Christian Church. “They were clearly trying to make a statement. I think that raises the point that we have to continue to be positive and continue to be a witness of building bridges and showing the strength of our commonality in our religions.”

Zehr is the president of the Carmel Interfaith Alliance. It was formed four years ago by Zehr and other local faith leaders. “I have been involved with interfaith work since 1987 when we started the Indianapolis Interfaith Alliance, now the Center for Interfaith Cooperation,” Zehr said. “That was when the Muslim community first moved to Plainfield, Indiana, and built their first mosque.”

Upon moving back to Carmel, Zehr approached Mayor Brainard and told him that he would like to become active in Carmel.

“He [Brainard] was very supportive,” Zehr recalled. “We [local faith leaders] organized our first gathering, and we [Carmel Interfaith Alliance] now have a coalition of Muslims, Jews, Hindus, Greek Orthodox, Roman Catholic, Mormon, Christian Scientists and Protestant congregations. I think people, in general, are not aware of how diverse this community is. We also have the Chinese Church and the Coptic Orthodox who are Christians that come from Egypt. There is a much greater diversity, not just of religions but also of cultures in Carmel, and it has been good.”

open to the public. Beginning in October, the Alliance will be hosting its second “Meet Your Neighbor” series that will take place every Tuesday evening beginning October 4 through November 1. The series will be open to the public and is free to attend. It is co-sponsored by the Carmel Interfaith Alliance and the Mayor’s Advisory Commission on Human Relations.

“The purpose for the Carmel Interfaith Alliance is to build relationships and to get to know one another,” Zehr said. “No politics. We’re not going to talk about Middle East issues or any political issues. It’s about building relationships.”

The Alliance has organized other events, such as the “Evolving Role of Women in Our Faith Traditions” at which Rabbi Sandy Sasso, wife of Rabbi Dennis Sasso, at Congregation Beth-El Zedeck; Rev. Lori Bievenour, Senior Pastor at St. Peter’s United Church of Christ in Carmel; and Rima Shahid, former Executive Director Muslim Alliance of Indiana were the keynote speakers. Shahid is currently the Executive Director at Women 4 Change Indiana.

“It was a great opportunity to hear about the evolving role that women have in faith,” Zehr said. “We did a service project where about 45 people came together and walked the Monon Trail together, picking up trash as a service to the city. We did this on a Saturday and Sunday, and we held a worship service afterward. It was a great experience, and we had a lot of young people and teenagers at that event. It was a good way to learn from one another while doing something for the city.” 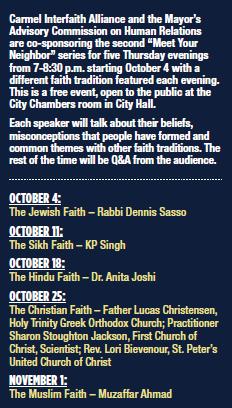 KP Singh, founding member of Sikh Satsang of Indianapolis and a member of the Carmel Interfaith Alliance, will be presenting at the upcoming series. Singh spoke on his support of Rabbi Sendrow and on the purpose of coalitions such as the Alliance.

“In the affairs of human beings, I think we are all children of one God,” Singh said. “Together, we stand in solidarity with Rabbi Benjamin and with all other faith communities. Each of these [places of worship] are places that are sacred to all of us. An assault against one is an assault against all. Therefore, they are the sacred places for each one of us where we can worship our God, and everybody joins in who wishes to join in. Faith teaches us to welcome one another as fellow human beings.”

Another member of the Alliance who will be presenting at the upcoming series, Rev. Lori Bievenour, Senior Pastor at St. Peter’s United Church of Christ, added her thoughts on the recent events and arrests.

“We have been awakened,” she said. “We have been called to action. We’ve been not allowed to rest in our privilege and in the safety that we always perceive but that sometimes gets taken from us. Although there might be a sense of relief that there are two that have been caught, there is also the reality that we have to move forward together, and that healing is a process that takes far longer than a few days.”

Ashhar Madni is a member of the Board of Directors for the Al-Salam Foundation and a member of the Carmel Interfaith Alliance. He understands the wide breadth of emotions that rippled through the city and surrounding communities after the vandalism. While he expressed relief from the knowledge of the arrests, he emphasized that his focus is on the solidarity that came in the wake of the act of hate.

“To the Muslim community, it [the news of the arrests] has been a big relief as well,” Madni said. “What can easily happen to the Jewish community can easily happen to us too, so I am very relieved. But what I want to focus on is more on what actually happened out of hate. What is happening after is actually what America is all about, and we saw it that night [at the Solidarity Gathering] and we’re seeing it today.” 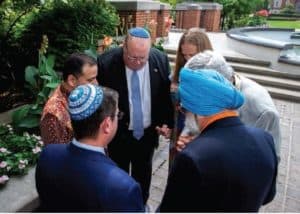 The reaffirmation of unity conveyed throughout the city has become a powerful testament to the perseverance of the people who reside and work in the community. It has overshadowed the act of intolerance and has illuminated the acts of kindness and goodwill throughout Carmel and the surrounding communities.

“We’re entering very soon a very important time in the Jewish calendar, the beginning of a Jewish new year,” explained Rabbi Dennis Sasso at Beth-El Zedeck, who is another member of the Alliance. “This is a season of reconciliation and renewal and rebuilding of relationships. Out of this unfortunate and spiteful act, there has emerged a consensus in our community, a consensus that was already there but has been reaffirmed: We are here for each other, and we will enter this new year and many new years to come as a community bound to one another, working with one another and loving one another.”

While the Carmel Interfaith Alliance is an independent organization from the City of Carmel, it has the full support of its mayor. Mayor Brainard spoke out against the act and reaffirmed an additional message that hate has no place in the city of Carmel.

“This [act] has brought our city together,” Brainard stated. “Out of this act, instead of hatred and intolerance came a reaffirmation of acceptance and love. Carmel is a city with people from many different places and many different faith traditions. It is one of the oldest and most important American values, as well as a law, that people are allowed to worship as they please in the absence of intimidation and fear.”