Nick and Adrienne Vollmer, whose youngest child Graham was diagnosed with SMA at 8 weeks old, along with State Representatives Doug Gutwein and Donna Schaibley, organized a triumphant campaign that garnered the support of other SMA families and researchers that ultimately led to Governor Eric Holcomb signing HB 1017 last March.

HB 1017 added SMA and SCID to the state’s newborn screening panel, changing the quality of life for every newborn diagnosed with either. Indiana is only the fourth state in the country to adopt permanent SMA screening. Screening is expected to be fully implemented by summer of this year.

One of the faces of SMA who has already made an impressionable difference at the Statehouse is 3-year-old Graham Vollmer who, along with his family and the aforementioned State Representatives, is shining a light on the awareness of SMA and the life-improving therapies that are now available. 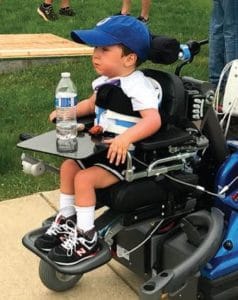 SMA is a disease that takes away a person’s ability to walk, eat or breathe. This genetic disorder affects the motor nerve cells in the spinal cord and is the number one genetic cause of death for infants. According to Cure SMA, SMA affects approximately 1 in 11,000 babies and can affect any race or gender. Approximately 1 in every 50 Americans is a genetic carrier for SMA. Because it is a recessive condition, generally both parents must be carriers for a child to inherit the condition. Individuals can be tested to see if they are a genetic carrier. Cure SMA is a national organization that has directed and invested in comprehensive research that has shaped the scientific community’s understanding of SMA since 1984.

At this time, there is no cure for SMA, but in December 2016, the FDA announced it had approved SPINRAZA®, the first-ever approved therapy for SMA. Ongoing research has shown that beginning therapy as early as possible is critical. Studies indicate the SPINRAZA® therapy is most effective when it can begin in the first few months of life before significant motor neuron loss occurs.

Furthermore, this research reinforces the need for newborn screening, which would eliminate long and costly diagnostic delays and allow pre-symptomatic therapy. In the case of SMA patients, time is of the essence. Nick and Adrienne found the then-clinical trial for SPINRAZA® and made the difficult decision to go forward for the sake of improving their son’s quality of life with the hope of increasing the length of his life.

There are four types of SMA – I, II, III and IV – based on the age of onset and the highest physical milestone achieved. Type I is the most severe and most common, typically diagnosed during an infant’s first six months and is often fatal early on in life. Individuals with SMA have difficulty performing the basic functions of life; however, SMA does not affect a person’s ability to think, learn and build relationships with others.

As part of their awareness efforts, the Vollmers and a dedicated committee of volunteers organize an annual walk to raise awareness for SMA families. This year’s Cure SMA Walk for Graham last month was the perfect setting to have Gov. Holcomb come and ceremoniously sign HB 1017. 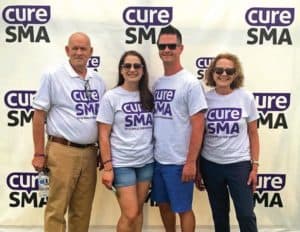 “I think for us, trying to rally for support and awareness will never end. That’s going to be an ongoing effort, and that’s what tonight is about for us,” Adrienne said. “The fact that we get to use this setting to celebrate the passing of this bill is absolutely amazing.”

Rep. Gutwein and Rep. Schaibley were both present for the walk and signing.

“This [effort] was about making people aware of what was available and what we needed to do with the new drug therapy for SMA,” Gutwein said. “Obviously, getting it on the newborn screening panel was a big deal. Adrienne is right; awareness is key. That’s what we’re trying to do now is get the awareness out there, and what a great venue to do it. This is fantastic.”

Rep. Gutwein’s colleague and state representative for our district, Donna Schaibley, spoke about how remarkable it is that the HB 1017 was expeditiously passed. The normal timeframe for any bill to be presented and passed can take upwards of years. HB 1017 was passed and implemented in approximately nine months.

“We were realistically looking at a two to three-year delay to get it on the screening for the state if we did not do it at the state level,” Schaibley emphasized. “At the federal level, the bill must make the federal list first, and then they funnel it down at the state level. And at the state level, it has to go through the process, so I’m sure it would have taken a couple of years to pass. Meanwhile, babies born with SMA would’ve continued to go undiagnosed at birth, and their outcome would’ve been tragically different.”

Adrienne scanned the crowd that was gathered for the Cure SMA Walk for Graham and said with conviction, “That was part of the push to get this done quickly. We were able to tell legislatures as we were working with them that this was not a matter of ‘let’s work on this and see if and when we can make it happen.’ There was real urgency behind the effort. Every day that passes without a newborn being screened is a day that more babies born with SMA are not going to get pre-symptomatic treatment. Our work is not finished. Our advocacy for SMA children and their families continues.”