Second Helpings: Serving Our Communities Plates at a Time

Indiana counties have food insecurity rates among children at or above 20 percent, according to a recent USDA report. This data include children from Hamilton and Boone Counties. More than 300,000 children in Indiana don’t know where their next meal is coming from. Additionally, 1 in 7 Indiana residents is food insecure. The Second Helpings organization has assisted with the efforts to feed our hungry Hoosiers for 19 years, and several Zionsville and Carmel residents are part of those volunteer relief efforts.

Second Helpings was established in 1998 by Jean Paison, Kristen Kienker and Bob Koch, a group of chefs who realized there was a huge amount of food being wasted and could be redirected to thousands of hungry Hoosiers while also training them to obtain jobs and become self-sustaining. The organization rescues prepared and perishable food from wholesalers, retailers and restaurants on a daily basis. The rescued food is used to create and distribute 4,000 nutritious meals to over 80 social service agencies that feed people in need.

It’s estimated that every man, woman and child in the U.S. wastes up to a pound of food every single day. In Indianapolis alone, that’s almost 1,000,000 pounds of perfectly good food headed to the landfill every day. Second Helpings works with its partners in the foodservice industry – distributors, caterers, restaurants, grocers and others – to safely and efficiently collect surplus and perishable food that was headed for the landfill. Every year, Second Helpings rescues more than 2,000,000 pounds of nutritious food and uses that food to transform lives through its Hunger Relief and Culinary Job Training.

“The best part of our Culinary Job Training program is when our graduates come back and hire recent graduates of this program,” said 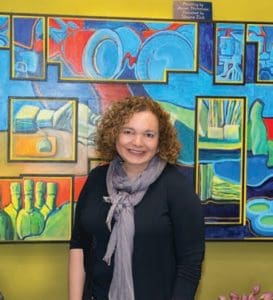 Second Helpings CEO Jennifer Vigran. Vigran, a Zionsville resident, joined the organization as a volunteer in 2000. She has served on the board of directors and initially stepped in as the interim CEO in 2010.

Several local area residents are active volunteers, board members and/or advisory council members of Second Helpings. Jeff and Ellen Butz, who live in Zionsville and own Landscapes Unlimited, are active volunteers at Second Helpings. Ellen has served as the board treasurer for two years and has helped to organize the annual and popular “Corks and Forks” fundraising event for Second Helpings. She said the services provided at Second Helpings are a “hand up, not a handout.” “I had heard a lot about the organization, so I went to check it out,” she said. “I filled out an application and went through the training that is provided to all the volunteers. Shortly after, I was going home and telling my husband, Jeff, all about it and how amazing the organization is. He became interested in learning more about it, and then a little over a year after I joined, he became a volunteer. We started driving and delivering meals together. I’m the driver, and he’s the driving assistant!” There are currently 11 vehicles in the Second Helpings fleet, delivering meals to all of the organiza- tion’s partnering agencies.

“You come out of there [Second Helpings] after volunteering, feeling energized,” Ellen enthused. “At Second Helpings, they make every volunteer feel like they are important and that they are making a difference in somebody’s life. The organization is better at this than anywhere else that I have volunteered. I wanted a volunteer opportunity that was hands-on and where I felt like I was making an impact, and I have found that at Second Helpings.”

Vigran emphasized nothing that comes into the facility goes to waste. Second Helpings holds environmental responsibility at the core of its mission. When Second Helpings takes in food, it also takes in a great deal of packaging. It recycles all cardboard, crates, plastic and bottles that hold its food. It also recycles all of its office paper and packaging as well. “For me, it is about being a part of the mission and knowing that the work that we do impacts the missions of 85 not- for-profit agencies,” Vigran stated.

“Our meals go to homeless shelters. They go to recovery centers. They go to Dress for Success, The Damien Center, The Julian Center, participating Boys and Girls Clubs and several other agencies that aid those in need. What we do at Second Helpings helps each of those agencies do their jobs. We provide organizations with food, so that they don’t have to spend the money that could otherwise go towards their programs and other resources. For example, each week, 600 meals are delivered to The Julian Center. That’s a six-figure impact on their budget.” Vigran acknowledged that the mission could not be completed without the dedication and passion of the volunteers. “We couldn’t do it without our volunteers,” she emphasized. “We have approximately 50 volunteers a day come and give generously of their time and talents.”

Though the local employment numbers seem strong, they don’t account for the fact that wages are not what most people made pre-recession, and there are many Hoosier families and people who are struggling to make ends meet. Most of them are only a paycheck away from being food insecure or a health issue away from being in financial crisis.

“Nutrition is critical to a child’s development and growth,” Vigran said. “We are talking about the future of our communities and of our labor force. Rural poverty throughout Boone and Hamilton Counties is another area of our focus. The further people are from the center of a city, they start to lose access to the sup- port and services that they need. How far is it to the nearest food pantry, and how often is that pantry open?”

While Vigran admits that Second Helpings cannot solve every problem, what it does fills in some of the gaps and assists the agencies, so they are more effective. “Sometimes it’s as simple as adding a meal program to an agency’s program of services,” she said. “We deliver meals to the Lebanon and Noblesville Boys and Girls Clubs, and if you talk to the directors of those organizations, they will explain to you the importance of being able to offer these meals. For some of their families, it is the only meal that the children will have that evening. We also encourage agencies to invite the parents to dine and sit down as a family because if one person in the household is hungry, the entire household is also hungry.”

Second Helpings accepts new partner agencies every year, and as the “community’s kitchen,” it continues to advocate for all of its partnering agencies and for the men and women who take part in the Culinary Job Training program. Parts of its awareness initiatives include the introduction of its young professionals group, First Course at Second Helpings. This group of YPs comes together the first Thursday of every month to volunteer and engage with their peers. The group gets people involved who are interested in a volunteer opportunity with other like-minded individuals without the conflicts of their daily work schedules.

Second Helpings also works with other service organizations like faith-based groups and corporate groups that are looking for hands-on volunteer opportunities with their co-workers. Tours of the facility are available and are encouraged, so interested people may see firsthand the inspiring and selfless work that the staff and volunteers do every day at Second Helpings.

For more information on the services and programs provided at Second Helpings, visit secondhelpings.org.