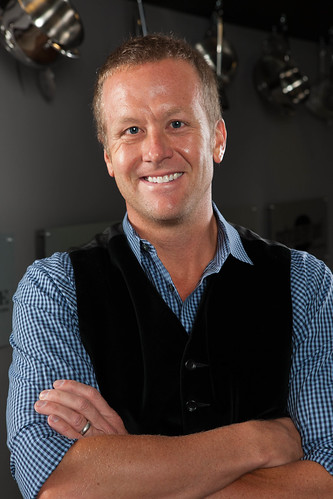 g an active community participant is nothing new to Scotty’s Brewhouse. So it makes sense that the local restaurant chain chose to involve the community when it decided to update its 96th Street location. Scotty’s Brewhouse is currently running a social crowdfunding campaign with the hopes of raising $750,000 from Hoosier donors. This investment will allow Scotty’s to remodel its Northside restaurant, pay back a current debt at a lower rate and involve the community in the company’s growth.

Since Scotty’s Brewhouse on 96th Street was opened in 2006, the company feels that it’s now time for a “major remodel.” The renovated space is slated to contain a pizza oven and a whole new look for customers, which includes doors that open up the patio. The remodel is also expected to increase efficiencies to improve the speed of service.

Despite having one of its most successful years in its 18-year business history, Scotty’s faces challenges in funding its planned renovation because banks are not inclined to provide loans for “brick and mortar” remodels. What is a successful business to do when it is too big for SBA loans and too small for private equity? In Scotty’s case, they decided to turn to the very people who made the restaurant chain successful to begin with: Its loyal customers.

Partnering with Indianapolis-based crowdfunding platform Localstake, Scotty’s is asking individual investors to fund this remodel and other working capital expenditures. In return for their dollars, Localstake investors do not just receive an incentive or a product; they also receive a financial return on their investment. Scotty’s is offering a revenue share opportunity. The company will pay investors 5 percent of monthly revenues over a period of five years until they have been paid 1.5 times their original investment.

The idea for the campaign came via one of Scotty’s vendors, Moody’s Butcher Shop. Moody’s completed its own Localstake campaign in May 2014. The funding gave Moody’s the chance to expand its operations by opening a third retail store located in Center Grove.

Scott Wise – the president and CEO of a Pots & Pans Production, which is the parent management company for Scotty’s Brewhouse and Thr3e Wise Men Brewing Company – saw Localstake as an opportunity to explore non-traditional ways of funding his business. “It’s not a traditional ‘going to a bank’ world anymore,” said Wise. “After coming out of the last recession, I had to think of new ways to grow. We used personal investors for previous store growth. For instance, in Fort Wayne, six doctors got behind bringing a Scotty’s restaurant there. They own a percentage of that restaurant. Now there’s a group in Evansville looking to do the same thing. In this new world, Localstake makes a lot of sense.”

Securing funding via the Localstake platform is similar to other crowdfunding marketplaces like Kickstarter or Indiegogo. However, Localstake focuses solely on raising funds and investing in private businesses. The investments are regulated, and they are often locally-focused. In the case of the Scotty’s Brewhouse Localstake opportunity, only Indiana residents can invest.

The Scotty’s brand is well known in Indiana, from the college towns where the restaurants were first established, to the cities where its young customers move to find jobs and start families. Wise and his staff are also active on social media, and the company frequently creates promotions that give back to the community, such as offering free lunches to kids when Indianapolis area school districts closed due to weather. The restaurant experience coupled with these positive social connections have created a dedicated customer base for Scotty’s.

“The reason that I like how Localstake does this is that investors are not just getting 1.5 times their money back,” said Wise. “Localstake incentivizes people to give more. The perks that I get to give at a restaurant level are larger. Using this platform, we are connecting locally and creating raving fans. If you’re invested in Scotty’s Brewhouse, then you are one of 50 or more people who believe so much in us that you are going to go out and support our business. These fans may dine one or two extra times a month with us because they have a sense of ownership.” 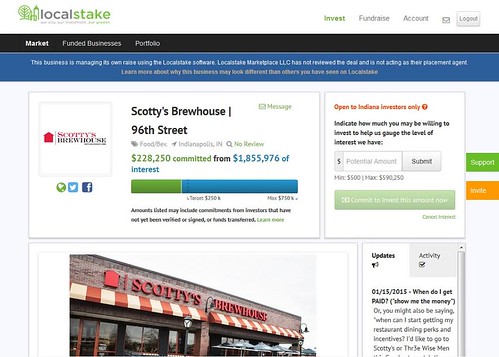 Scotty’s currently has secured over $190,250 in funding commitments and over $1.6 million in interest on Localstake from 700 investors. Persons who are interested in learning more about the details of this investment opportunity can visit Localstake.com, create an account, select Scotty’s Brewhouse and then express an interest by entering an investment amount. Investment opportunities for qualified investors begin at $500, and monies are held in escrow until the minimum funding amount of $250,000 is met. At that time, funds are transferred to Scotty’s, and the term of the investment agreement begins. The campaign is currently scheduled to run through the end of February, with investment incentives decreasing on Jan. 31 and Feb. 28.

There are currently a number of other area businesses also seeking funding via the Localstake platform. According to Kevin Hitchen, one of the company’s founders, an estimated 50 percent of the companies using the service are established and 50 percent are start-ups.

“The challenges of the current economy make banks less willing to loan money to small and medium size businesses,” said Hitchen. “Simultaneously, there’s also a growing interest in supporting all things local, whether it’s food or business. Localstake helps bring together people who are interested in investing in their community with local businesses who need funding. We are kind of like a Match.com for connecting businesses and investors.”

If all goes well with the current Localstake fundraising campaign, Scotty’s fans can expect to see more of this type of creative fundraising efforts as the company works to upgrade other locations.