Sailing the Skies of Hamilton County

Growing up in Hamilton County, one may easily take for granted spotting a brightly colored hot air balloon gracefully floating across the sky. This is not a common spectacle in most parts of the country. The reason for the scarcity of hot air balloonists is not for a lack of enthusiasts. It’s an exorbitant hobby (average cost is over $45,000 depending on size and passenger capacity) that does take a high level of skill from the pilot, which is why most hot air balloon appreciators rely on experts like Geoff Ziegler, a lifelong Carmel resident and highly respected balloonist, to safely pilot them across the Hamilton County skyline. 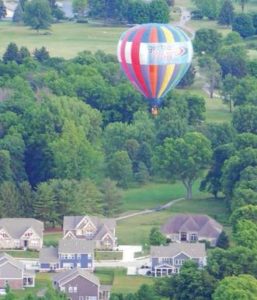 Today, hot air balloons typically serve as a source of entertainment for a special occasion or to check off one’s ‘bucket list,’ but the hot air balloon was actually the first successful human-carrying flight technology. The first untethered manned hot air balloon flight was performed by Jean-François Pilâtre de Rozier and François Laurent d’Arlandes in 1783 in Paris, France, in a balloon created by two brothers, Joseph-Michel and Jacques-Étienne Montgolfier. Once powered by hydrogen gas, hot air balloons now use helium as a lifting gas.

Ziegler’s passion for ballooning is a result of his early interest in the old hydrogen gas balloons and airships of the 1930s.

“As a young guy, pre-teen, I was always interested in the gas balloons, the Hindenburg-type balloons and airships from way back in the day,” Ziegler said. “I was interested in the olds balloons that had the sandbags and the netting. When I was older, hot air ballooning had become popular on the West Coast and a little bit on the East Coast, and sport ballooning and races were popular. I was fascinated with it all.”

After crewing for an out-of-town balloonist competing in one of the first Indiana State Fair Balloon Races, Ziegler was inspired to take balloon pilot instruction.

Ziegler and his early business partner, Michael Kennedy, formed “Windbaggers” in 1976 before becoming Skypoint Hot Air Balloons in 1999. Windbaggers worked mostly with area businesses as a promotional partner and worked with companies like Hardees, Coke, Pizza Hut, Wendy’s and many others. Kennedy, a talented illustrator, eventually left Windbaggers to work for Disney World as an illustrator.

“We hit up all of the ad agencies at the time,” Ziegler said. “Mike would say our balloon was a ‘flying billboard.’ We did the original grand opening for Bill Estes Chevrolet over off Michigan Road and worked with all kinds of businesses. Mike had to make a huge decision, but I bought him out, and he went on to have a huge career down there in Orlando doing illustrations for Disney.”

During his 30-plus year career as a professional balloon pilot, Ziegler has competed in several balloon 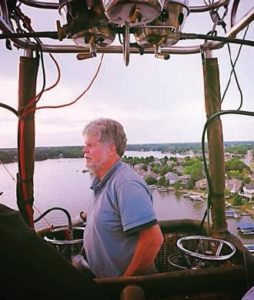 “I competed in my first race at the State Fair in 1978 and was the first Indiana pilot to win in 1979,” Ziegler shared. “After that, I got the bug and went on to compete in many more races.” Ziegler relies on local businesses with a national presence for sponsorships for these races. The businesses, in turn, get a great deal of local promotional opportunities with the balloon as part of the sponsorship package, company picnics, fundraisers, etc.

Ziegler holds the record of being the longest, continuous pilot in the history of the Indiana State Fair Giant Balloon Race. Ziegler also holds ratings in all size classifications of balloons including the largest balloon in the U.S. at the time, 240,000 cubic feet/passenger, which was operated from 1985 thru 1992.

Ziegler is proud of his company’s history and reputation for its first-class accommodations and safety record. He has seen many changes in balloon technology and safety in the last three decades. Ziegler owns four balloons, all with the latest updates, including an oversized, partitioned basket that allows for more room per passenger (up to six passengers, plus pilot). There are no fuel tanks or equipment in the designated passenger area. “Clients tell us that they like our taller basket sides,” Ziegler pointed out. “Our basket sides are 6-9” inches taller than the standard basket, and it psychologically gives people peace of mind.”

Ziegler explained that in addition to the rigorous training that balloon pilots go through to get a commercial license, they also report to and follow the rules of the FAA, just like any other aircraft. Unlike a plane, hot air balloons do not have to take off from an airport. “We can take from any place that we have permission to do so that also meets certain criteria,” Ziegler said. “We have 15 locations in the greater Hamilton County area that we take off from and will typically fly over Hamilton County. We fly over the reservoirs quite a bit.”

When asked about the ideal landing location, Ziegler replied, “When you fly as much as I do, for as many years as I have, you learn to play the winds, much like sailing. I steer the balloon and use a lot of common sense. We have places throughout the area that are ‘friendly’ landing sites where we have previously landed. People always come out, let their kids run over and are excited to see us land. Having flown in the same county for over 30 years, I have seen so many changes below. It’s a perspective from the air that you can’t see from driving around at ground level.”