Before discussing the world of jammers, hip whips, snowplows and other descriptions from the world of roller derby, let’s play the game of Fact or Fiction as we peruse the dual life of Bree Simmons of the Circle City Derby Girls.

Fiction: Unlike her roller derby name of Killer Purple, there doesn’t appear to be an evil bone inside the tiny 120-pound Simmons. Indeed, it could be argued that this mild-mannered skater would be an unlikely slayer of ants and other insects.

Fact: This alleged rough and tumble skater lists cookies and milk among her favored foods.

Fiction: In order to scare opposing skaters, Simmons claims that before bouts (not games), she does push-ups on her knuckles, then beats her chest and closes by screaming really loud. During questioning, the skater confesses the knuckle push-up does not really exist and should not be confused as her version of the Maori Hala (the war dance of the Maori tribe in New Zealand).

Fact: Her first athletic endeavor was in gymnastics, following the footsteps of her parents, Brent and Celeste Simmons, who both performed at Iowa State. Brent, a native of Columbus, Indiana, participated for two U.S. World Championship teams in 1970 and 1974 and was inducted into the USA Gymnastics Hall of Fame in 2008.

Fiction: Bree started roller skating when she was two years old. Not true. Simmons actually didn’t learn to skate until she joined the Thus, Simmons’ lifestyle blends wearing a white doctor’s coat in the daytime and a Derby Girls uniform #83 at night and on weekends.

“It’s a full schedule,” admitted Simmons before a May bout (that means game in roller derby chatter) at the Forum of Fishers. “I probably work 50 to 55 hours a week at St.Vincent, but I love roller derby. It is uplifting to become part of a team when you work with people from all different kinds of backgrounds.”

Indeed, the Derby Girls are a collection of professionals with a wide assortment of careers.

Though their skating names may range from threatening titles such as Ames To Kill, Deadly Dimples and Rowe M. Over, the daytime careers of the skaters include being nurses, teachers, and in Simmons’ case, a medical doctor. Yes, these are the girls next door.

Does this grinding dual lifestyle become difficult to execute?

“I want to do it as long as it is fun,” said Simmons. “I want to get better and better. But the day after a match, I feel like I have been run over by a truck.”

Fortunately, Simmons hasn’t suffered a serious injury, except for a nagging quad strain. However, that wasn’t the case involving a teammate during a practice earlier this season. The skater was bumped, awkwardly fell to the concrete track and suffered multiple fractures in her ankle. No one shouted, “Is there a doctor in the house?” 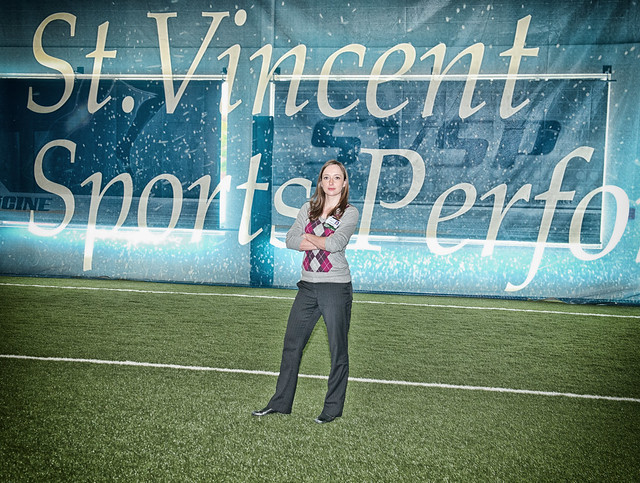 “You are skating on concrete,” said Simmons, who quickly tended to the fallen mate. “That can be a recipe for disaster. You have to have a minimum of skating skills.”

And the Derby Girls jammer has learned that in her tour of duty. After playing volleyball and softball as an adult, she got a taste of roller derby.

“Once I saw the game, I knew it was for me,” she said. “When I started, I really didn’t know how to skate, so it took a while for me to compete. But I love it.”

Simmons also loves her medical connection to the sport. When not attempting to score points for the Indianapolis team, she has become a medical consultant for the World Flat Track Derby Association at league meetings and championship series. The West Chester (Pennsylvania) University graduate has used her expertise in working on a variety of sports injuries (tendinitis, concussions, stress fractures, etc.) to guide the WFTDA and its expanding number of franchises across the U.S.

There is no comparison to today’s version of roller derby on flat tracks to the banked track events televised 50-60 years ago on black and white sets. There is much less theatrics, no Hall of Famers such as Big Joan Weston and Josephine “Ma” Bogash, and long gone is the legendary men and women’s matches between the San Francisco Bay Bombers and the Los Angeles T-Birds. There are no fisticuffs or throwing rivals over the railings in flat track skating. In fact, there are no railings in the 2015 version of the sport.

“In our home opener, there was a little dirty play by the other team, and I lost my cool a little bit,” recalled Simmons, who is married to One Nate Stand of the Race City Rebels.

Thus, we close with another Fact or Fiction on this roller derby performer. Has she ever been challenged by a foe?

We’ll let you create the next chapter of the story.