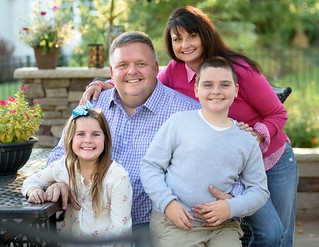 When he was just 13 years old, Rob Delaby sat by his grandmother’s bed as she battled cancer. Without any power to help beyond comfort and prayer, he felt helpless. Years later, he faced another cancer diagnosis of a close friend. Rather than sitting back, Delaby decided to do as much as he could to make a difference.

“When we found out in September 2014 that my good friend was diagnosed with breast cancer, I said that I would be damned to just sit there and watch it happen,” said Delaby.

Delaby decided to raise money for Susan G. Komen and breast cancer research as a Pink Tie Guy, a group of community leaders who raise money for the fight against cancer. As owner of Shane’s Landscaping and an active member of the community, Delaby fit right in. Between June 1 and August 31 of this year, he went to everyone he knew in an attempt to raise the largest total donation. 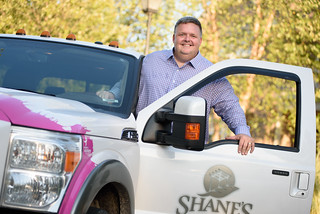 Delaby owns Shane’s Landscaping in Fortville. He poses here with one of his trucks which was painted pink on the front with the Susan G. Komen logo.

“Every donation was a personal conversation or a handwritten letter with someone that I know personally, whether through business or personal relationships,” Delaby said. “I explained how I never do this, how I am always the first guy to be giving. Everyone knew me well enough that they took me very seriously and dug deep into their pockets.”

“[Learning that I raised the most money] was amazing. I was determined to win. If I do something, I do it. If I tell someone I will go the extra mile, I go two extra miles, so I left it all on the table,” said Delaby. “I was thankful that my efforts were profound enough to put me in the position as the 2015 Pink Tie Guy.”

Throughout his entire campaign, Delaby was motivated through the devastation he has seen cancer cause in his own life as well as others. He used this passion to go above and beyond in terms of raising money. “When I talk about it, it brings tears to my eyes. I can’t quite explain it,” said Delaby. “I think that it has to do with the pain that I have deep inside from the loss that has been caused by cancer. I am driven by the fight inside to avenge the death of those that were taken by cancer.”

Comparing himself to a supply chain to the front lines of the war against cancer, Delaby emphasized the importance of the community coming together to tackle the disease.

“Breast cancer is a powerful disease that knows no boundaries, so we all need to come together to fight,” Delaby said. “It was my calling to generate resources to those on the front lines fighting the fight.”

Delaby’s own business experience helped him during his campaign. After buying Shane’s Landscaping in 2006 and building it to almost twice the previous size in under a decade as well as recently starting a new business, Premiere Trees and Tree Moving, Delaby has learned how to work with others to reach success.

“I am driven with an effort to try to be there for everyone that needs me and fulfill all of my commitments,” said Delaby. “It is the same for my business and the same for my role as Pink Tie Guy.”

With doctors so close to a cure, Delaby emphasized how much every donation truly matters.

“Just go on the website and donate,” said Delaby. “We are so, so close to finding a cure. When you say every dollar helps, it truly does.”