Ring in the New Year in Style at the Palladium

As we look to close out the end of the calendar year, the planning has been underway for The Center for the Performing Arts’ 3rd Annual New Year’s Eve Extravaganza presented by Taft. This year’s extravaganza will be held December 31, 2017. Festivities kick off at 9 p.m. with live entertainment throughout the Palladium.

Last year’s event sold out, and The Center’s CEO Jeff McDermott anticipates that the event will likely sell out again this year.

“Last year, we had some limitations on capacity that have been worked out,” he explained. “We will be able to increase the capacity by 300 people this year. We have people of all ages, bands in every room, food and beverages, and it should be a great event again this year. We think that this event will become an annual New Year’s Eve tradition for a long time.”

Attendees who have not experienced the NYE Extravaganza can expect to be delighted with a first-rate event as only the board members and staff at The Center knows how to produce. Carmel Magazine’s publishers, Neil and Lena Lucas, attended last year’s event and emphatically insisted that people purchase their tickets before the event sells out. 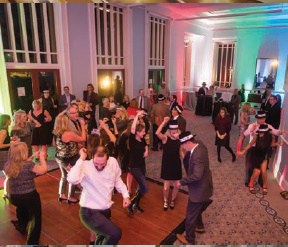 “The NYE Extravaganza at the Palladium is Carmel’s premiere New Year’s Eve event,” Neil emphasized. “This event rivals any others in the greater metro area and large events I have attended in Chicago. Where else can you get an incredible variety of musical entertainment and food in one venue and for one ticket price? There is truly something for everybody at this event, and having the Palladium as the backdrop is just amazing. My wife, Lena, and I are looking forward to ringing in another New Year at this event and encourage our readers and friends to join us this year. Increasing the capacity for the event will only make it better.”

The extravaganza features multiple artists that perform throughout the Palladium as well as a variety of complimentary hors d’oeuvres, desserts and coffee with a cash bar in every room. Drink packages will be available, and designated drivers receive complimentary soft drinks, so partygoers can party non-stop until 1 a.m.

This year’s entertainment lineup includes local favorites The Bishops on the Palladium stage; Scott Routenberg Trio (jazz) in the Shiel Sexton Songbook Lounge, DJ Futon John in the Robert Adam Room and Latin music in the Founders Room. Attendees can hop from room to room and enjoy all of these entertainers all night long without having to pay additional cover charges.

This year’s presenting sponsor is Taft Stettinius & Hollister LLP. Amy Wright, a partner at Taft, has attended this event before and is looking forward to attending this year’s event. 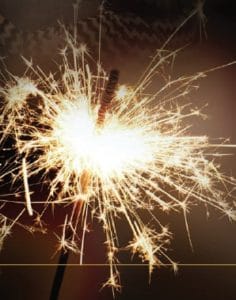 The year will be brought to a close at midnight, and the New Year will be ushered in with a fabulous fireworks display over the city’s skyline. The fireworks are provided by the City of Carmel and are a spectacular display for all who can see them. Though, the best view is from the Palladium’s balcony, of course.

Avid supporters of The Center, Randy and Kim Sorrell have attended both years and are looking forward to attending this December.

“This event is incredibly elegant, very lively and offers great entertainment and wonderful food,” Randy said. “You’re surrounded by lots of friends, familiar faces and brilliant people in the community that you know or that you would like to get to know. If you want a romantic experience, then you head to that stage to slow things down. If you want to jam and listen to something livelier and swing, then you go to the jazz stage, etc. You can change areas, drinks and food for a totally different experience all under one roof. You’ll be having fun, and the next thing you know, it’s not midnight; it’s one or two in morning.”

Those attending the event later in the evening are able to enjoy a substantial meal at any of the local restaurants before heading into the Palladium without the hassle of paying for additional parking or walking great distances.

“I recommend going with a small group or another couple and having dinner before,” Kim encouraged. “Once you are at the Palladium, you are good for the rest of the night. I highly encourage people to go with friends, though you probably won’t stay with your group the entire night, and that’s part of what makes it fun. You’ll arrive with another couple, and by the end of the night, you’ll end up in a group of 12. That’s what’s so fun about it. I don’t know where else you could go to celebrate the New Year, and it would be like that. You don’t have to jump from venue to venue, paying cover charges for each one, having to walk in the cold air in heels and then worry about where you’re going to put your coat once you get in. Not too many places offer coat checks anymore. It is also nice because you feel safe because you are so close to home, and it is just a short Uber drive home.”

Randy concluded, “At midnight, after you’ve been dancing and having a ball all night, you get to walk outside on the balcony, and the bonus is an amazing fireworks show. Everyone is standing out there, singing and celebrating the New Year. While it’s a big event, it’s intimate.”

To purchase your tickets for this year’s New Year’s Eve Extravaganza, visit thecenterfortheperformingarts.org.