Rick Fuson Reflects on His Thirty Years as a Pacer 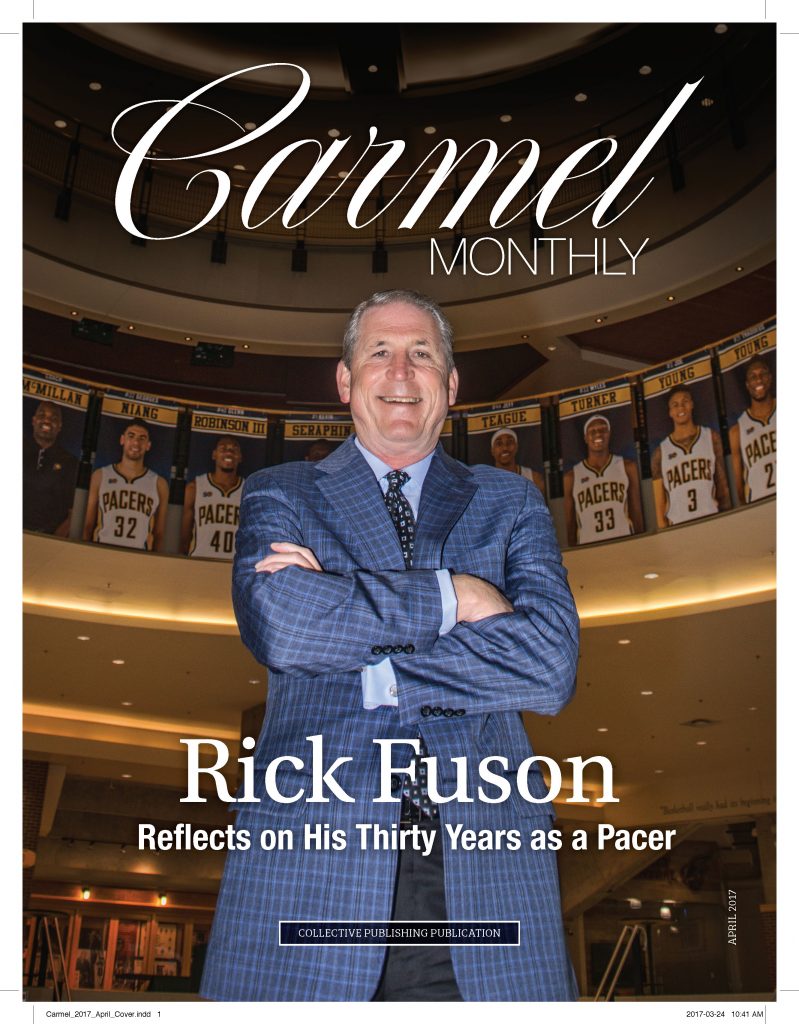 Fuson’s family was originally from Terre Haute and Clay County and moved to Indianapolis where he was born and raised. His father, Wayne Fuson Sr., was the sports editor for the Indianapolis News for more than three decades. After graduating from high school in 1971, Fuson attended IU and studied political science. He played football for two years for John Pont. After graduating in 1975, Fuson moved to California and worked on a Lilly endowment grant that was focused on studying alternatives to traditional public safety delivery systems, which is known as today as privatization.

Fuson returned to Indiana and met Larry Conrad, the former secretary of state and spokesperson for the Simons who purchased the team in the 1983-84 season. Fuson was hired by the Pacers organization and began his 33-year career working for Bob Salyers, who was the Pacers president at that time. He worked for Donnie Walsh and Jim Morris before being promoted to president and COO in 2014, when it was announced that Morris was moving into the vice chairman role. Fuson handles the business side of the Pacers, while Larry Bird leads the basketball operations.

He is responsible for bringing the Big Ten Basketball Tournament, World Swimming Championships, World Basketball Championships and many more events to Bankers Life Fieldhouse and also brought many events to Market Square Arena when it was still operating.
“I was part of that team that worked with Donnie Walsh and David Kahn when the deal was made with then mayor, Steven Goldsmith,” Fuson said. “Market Square Arena was a great building with a lot of great memories, but it didn’t have the length of service that a building like Bankers Life Fieldhouse will have because this building has good solid bones. Today we have a building that is the busiest in the state and the best basketball facility anywhere. We just completed putting in the new clubs and refurbishing some areas. This building is like a good old hou 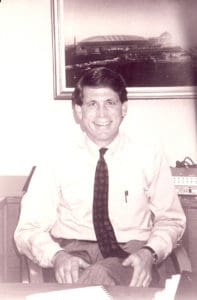 se. You don’t have to tear it down because there are good ways to renovate it.”

He continued, “We have to make sure that we have the best facilities, especially in our marketplace, because we’re not the biggest market in the NBA by any means. We must have the amenities that the players want.”

Fuson discussed the addition of the new St. Vincent Center, which is across Delaware Street and will house the new Pacers training center. The 130,000-sq. ft. building will also be the home to the world- renowned St. Vincent Sports Performance.
“Our city continues to grow,” Fuson stated. “Had the folks in Indianapolis forty plus years ago not decided that sports were a good economic development generator, a lot of things wouldn’t have happened, not just for Indianapolis but the entire region. Carmel…Greenwood, Fishers, and the Zionsville areas continue to grow outwards from the core.”

Bringing his career to full circle, Fuson is working on the organization’s bid to host the 2021 All-Star game, an event that he worked on his first year with the Pacers and that hasn’t been held in Indianapolis since 1985. Fuson acknowledged that bidding to host this prestigious sports event and revenue- generator for the city and surrounding counties is not a cake walk.

“We have to really sell ourselves,” Fuson emphasized. “We do not have oceans or mountains to attract the fans. The attractions that we have to do today to make ourselves known are tremendously different than what we did 30 years ago. When we last hosted 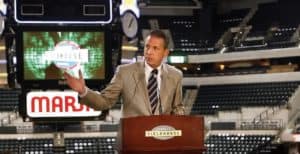 it, the city was in its infancy. Today, it is very expensive to put on and brings in scores of media, personnel, and fans. The entertainment, the transportation, the hospitality, and the partners that are a part of the NBA all must be considered when planning.”

Fuson continued, “There’s no hotel in the downtown area that takes you more than 20 minutes to walk to. Where we are at Bakers Life Fieldhouse in relation to Georgia Street is only three blocks away from the Convention Center and another two blocks to the Lucas Oil Stadium. There’s no place better than this. We have to turn in a bid in late April. We are in the process now of doing our due diligence as it relates to all the details and specs that are out and how much it’s going to cost. Over the next six to eight weeks, we’ll make the final determinations on all of that. There’s a lot of people who have a lot of things to say about it, but Adam Silver, the NBA commissioner, will make that recommendation to the team owners. We are competing against several other cities in the NBA who want it too.”

Asked about how he feels about the future of the Pacers organization, Fusan replied, “The future for us and for a lot of things looks bright. We have by far the best ownership, in my opinion, then anybody in sports. The Simon family, Herb, his son Steve, the late Melvin, who was a dear man, and his kids: Cindy, Debra, and David, not only care about basketball and what we do here, but they care about the city. I think the future continues to hold the best of the best for our city because of Herb and his family.”

When he’s not preparin 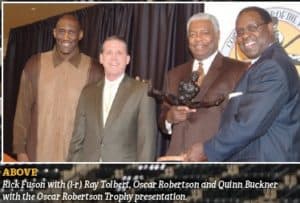 g championship tournament bids, planning major entertainment events, and overseeing the day-to-day business for the Pacers, Fuson and his wife, Karen, who oversees 60 newspapers under the Gannett West Group, rejuvenate at their property in Brown County, Indiana.

“We have a place in Brown County where we have chickens and a big garden,” Fuson said. “We have a little vineyard, and we like to plant flowers. I also hunt and even have some venison in my freezer. Living and working in the city, we enjoy being able to be an hour away and be in the middle of the woods and be able to farm. We have a formal garden—it’s more like a Williamsburg garden—and is therapeutic for the both of us.” The couple have lived in other cities but consider Indianapolis and the surrounding areas a great place to live.

Q – Would it be fair to say that Bankers Life Fieldhouse is the Camden Yards of basketball?
A – We called it that for a long time. It really is the first retro-themed building in the NBA. I think that it is has some likeness of Camden Yards and some Hinkle Fieldhouse charm in terms of the barrel roof. I’ll never forget when we exposed the barrel roof, some people said it looked like Hinkle, and asked why we would ever do that and I replied, ‘I don’t think anybody’s mad at Tony Hinkle.’”

Q – When the conversation was centered around Indianapolis becoming the amateur sports capital of the world, most people laughed. Did you foresee that it would be what it is today?

A – When Indiana went to the Rose Bowl in 1968, Jim Murray, a great sports writer for the Los Angeles Times, called Indianapolis, and I paraphrase, ‘A cornfield with the racetrack around it.’ At that point, it was. It’s great that we have IMS and really from that point forward, the late 60s, with all the public and private ventures that have been done, the city has grown exponentially.

Q – Looking back over the last 33 years, what was going on when you were hired with the Pacers and what have been the highlights?

A – I want to say that we picked Wayman Tisdale in that draft. I’ve seen a lot of players and coaches come and go and many events. We assisted in 1984 when the Dream Team played the college All-Stars in the Hoosier Dome. Paul McCartney has performed in Indianapolis three times at Market Square and at Bankers Life, and I attended or worked all three of his performances. There are several events going on every week and each brings a different crowd, which is why I have enjoyed being able to do this for over 30 years. I got to be a part of Reggie Miller’s career and still get to work with Slick Leonard and be in the company of Larry Bird, a basketball legend in Indiana and in the NBA.

Q – What event haven’t you done yet that is on your list to do?

A – From the Pacers side, I certainly hope that we can win the championship for Herb. I would love for the guys to win it.