Dr. Chuck Dietzen, co-Founder of iSALUS and chief medi- cal officer and president of Timmy Global Health, and his co-founder, Michael Hall, find this unacceptable. They founded iSALUS Healthcare, which focuses on meeting the individual needs of each healthcare professional they serve.

Dietzen and Hall, along with their team of talented programmers, have developed thousands of templates in nearly every specialization. They have the technology to further customize their templates for any healthcare providers’ specific practice. iSALUS’s mission is to make healthcare providers’ lives easier while developing a mobile application that allows them to take their patient’s charts, view or upload images, finish charting, write prescriptions, and create superbills from anywhere in the world with an internet connection or cellular access.

Dietzen draws upon more than 25 years of healthcare experience to under- stand the working relationship between physicians, hospitals, patients and payers. Using this knowledge, he guides the development of Office EMR, iSALUS Healthcare’s web-based Electronic Medical Record and Practice Management solution, to ensure it meets industry demands. “There is a very simple problem that needs to be solved,” Dietzen says. “How do we [health care providers] get to the child and how do we get the child to the care?” Blake Head, the vice president of product development and director of operations for iSALUS, has been with the organization since 2008. Head addressed some of the changes in the healthcare industry and how iSALUS’s software is designed to solve some of the current challenges. One of the pieces of the solution is telemedicine. Telemedicine in its most basic definition is “the remote diagnosis and treatment of patients by means of telecommunications technology.”

“Our telemedicine software is going to allow providers and patients to contact and visit one another without being in the same physical location,” Head explained. “It looks and works a lot like FaceTime but it’s completely secured and built directly into our software. We worked our way through on the existing devices on the market and identified the pros and cons with all the various technologies.

“If you look at Apple and Facetime, it works because it’s easy. We want our software to be user-friendly, and easy for both the provider and the patient without extensive training for either end-user. In the United States, approximately 90 percent of the adult population has smart phones and replace them every couple of years so they’re keeping the technology base up-to-date, which eliminates the worry about having to re- place obsolete technology or antiquated equipment,” he says. “With our software, we are communicating point-to-point, and we have developed our technology so that it cannot be intercepted. Being cloud-based and a small company, we can build and create a lot of cool technology. We had to make a highly configurable piece of software with encryption codes that met all the required regulations.

We’re also not storing the data anywhere. So it’s not being recorded or saved any- where, making the shared information highly secure.”
Dietzen emphasized that colleagues enjoy interacting with one another, particularly in the health care industry, and especially with colleagues from all over the world.

Nelson Chow, CEO of LIH Healthcare and an associate of Dietzen’s, recently travelled from China to Indianapolis to consult with Dietzen and his colleagues on 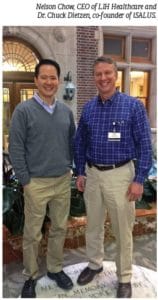 matters such as the practice and development of telemedicine. Chow also took a tour of iSALUS and offered his thoughts on the importance to the world of this developing technology. “The great thing about what Nelson and LIH are doing [is] they are instituting a whole new type of medicine to China,” Dietzen stated. “To be pioneers in this is exciting, and so he came here so that I could introduce him to some additional resources here in the U.S. and specifically here in Indianapolis.” He adds, “It’s about relationships and finding people that you want to work with and feel that have the right niche for what we, providers and developers, are doing.”

Chow, a former electrical engineer who specialized in semiconductors and computer chips, developed LIH as a direct response to an arduous journey of trying to find proper care and therapy for his 9-year-old daughter, Olivia, who was born in China with Down Syndrome. Immediately following her birth in 2007, Chow realized that even just five minutes after her birth, the despair and hopelessness displayed by the nurses represented the culture in China that Chow realized had to change. Children with disabilities in China are cast away and hidden from society. They do not typically receive therapy or treatments that would otherwise improve the quality of their lives.

Chow and his family came back to the U.S. where his previous company was headquartered and began to educate themselves on their daughter’s needs and what therapies were available to her. Fast forward to the present day. Chow’s company, LIH, has expanded into an influential organization that works to change China’s public policy, advocates for accreditation in Chinese universities, and works to provide qualified advanced therapists throughout healthcare facilities and hospitals in China.

“Now, we are operating clinics throughout the coastal cities of China and just opened a 107-bed rehabilitation hospital in the interior of China,” Chow says. “Technologies like iSALUS, are of interest to me because of my background in engineering and start-ups. I speak their language. I believe iSALUS to be a dedicated group that is small and nimble enough to allow for ideas at any level to grow. Innovation comes from small groups such as these.”

He explains, “They are the right size for what they are doing now. The question is, is the technology robust enough for the need that exists for global telemedicine? For what iSALUS has developed and is offering, I see their size and dedication as being a big advantage. The mission paralels LIH’s mission in that we are looking for providing care and resources, not just for all of China but also universally. We simply cannot reach every corner of the world, and we need to be able to rely on technologies like Telemedicine to accomplish our missions.”

For more information on iSALUS and its available software products, visit www.isalushealthcare.com