Representing City and Country: The City’s Mayor shares what makes our city great with global leaders

In the closing months of 2015, Mayor Jim Brainard traveled abroad to meet with government leaders and officials of a few of our allied countries at the request of the U.S. Department of State. The mayor took the time to discuss with us the purpose of these visits and how he was invited to speak to these countries’ government leaders and officials on the topics of city development, transportation and environmental and conservation issues. Representing the city of Carmel, the Midwest and the U.S., Brainard used the lessons learned and success stories from Carmel as his examples throughout these discussions. “India is a fascinating country, and the Indian people are gentle and hardworking, but the country has tremendous infrastructure needs,” Brainard explained. “They need billions of dollars in basic infrastructure to handle their streets, sewage and water issues. India is urbanizing very quickly. It was one of the world’s highest populated countries even 20 years ago with 75-80 percent of their population living on farms and out in small villages. Today almost 50 percent of India’s population resides in their cities.

“Their cities are facing growth pressures that are not that dissimilar to what Carmel has had to address in our past. Part of what I wanted to accomplish during these discussions was to share ideas and examples on how to handle, plan and finance the growth of their cities, so that the quality of life, environment and air pollution can be improved. We talked about street grids and traffic planning. The middle class within India is growing expeditiously, and the demand for cars is increasing, though their current infrastructure can’t support the increase of vehicular traffic.”

During these discussions, Brainard also discussed designing cities, so that people can walk to more places rather than building single-level developments that stretch for miles, putting thousands more vehicles on the roads and increasing vehicular emissions.

“The air pollution in Delhi is off the charts,” Brainard described. “The air that anyone breathes there is the equivalent to smoking several packs of cigarettes a day. It’s polluted heavily by coal plants, traffic and outdoor fires produced by their homeless population who are cooking and heating themselves with very basic fuels that pollute the air. The leaders that I met with were eager to find solutions and discuss ideas on how to make improvements and provide better services to the people that they represent.”

The mayor also traveled to Paris for the United Nations Paris Climate Change Conference and Germany where he met with leaders like Boris Palmer, Mayor of Tübingen. Discussions of environment and conservation were had, though Brained spoke with several Europeans about refugees and how to acclimate them, another controversial global topic. 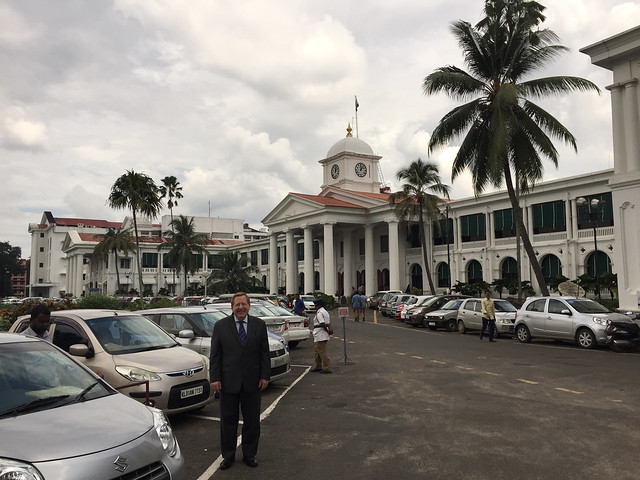 “There was great concern with what the countries are going to do the refugees,” Brainard relayed. “For instance, Germany is a crowded country, and they have urban growth boundaries. They want to integrate the immigrants and find a way to provide them with jobs, proper clothing and shelter as winter is coming. They have a fairly bureaucratic system about finding jobs for refugees, and their mayors are looking to expedite that process, make it more efficient and allow them to start working.

“There are, of course, security concerns about ‘plants’ being among the refugees. Generally, most Germans recognize that these people have left their homes and belongings because they were scared to stay. Many Europeans remember when they themselves were refugees after wars and have a greater understanding of what the refugees are going through with a healthy skepticism about how to best provide services without impacting their own local governments and citizens.”

Brainard met with people from The German-American Center (The Deutsch-Amerikanisches Zentrum/James-F.-Byrnes-Institut).

The Center is a non-profit, nonpartisan, cultural and educational institution in Stuttgart, Germany, to support the German-American relations. It was founded in 1995 as a successor of the Amerika Haus which was established after WWII and intends to provide information on social, cultural, political and economic issues in both countries. Brainard visited their library and saw many states from the U.S. had books and materials sent over. He has pledged to send donated materials and books representing the city and Indiana to the Center.

Brainard met with many major business leaders during his trips and plans on following up with those contacts in the event that their businesses look for places to expand in the U.S., hoping they keep Carmel on their radar.

“The people that I met throughout these trips were very kind and hospitable,” Brainard said. “One of the reasons why the State Department wanted to send someone to represent the Midwest was to talk about what the middle part of our country is like and how we approach politics and major international issues.”

Back on the home front, Brainard discussed what lies ahead for our city in the New Year.

“We want to continue to fix our own transportation system and make it work well,” he emphasized. “We have laid out many of our projects on the east side that we think are due now that we have completed many projects on the west side. We need to find funding for those projects, get them under design and get them built. I am laying out a plan for the new City Council in early January on how we can do that. We will continue redevelopment of this area. There are 11 buildings to be built in the City Center over the next few months.” 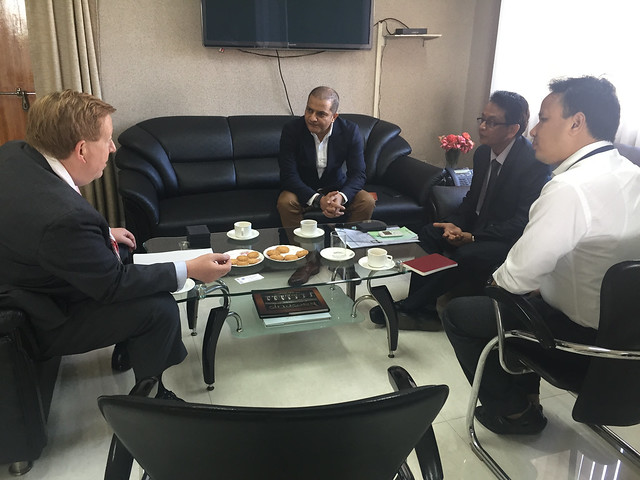 Additionally, previously reported projects in Midtown, the former Party Time site and projects in the Art and Design District will commence in 2016.

The mayor and his staff are excited about the city participating in the upcoming statewide 200th celebrations. “It is an opportunity to celebrate our history,” Brainard stated. “It is a time to give thought to the sacrifices that the pioneers, and quite honestly the refugees from other places, made when they built a new country. That’s what the history of the 18th and 19th centuries in America are all about, refugees finding a better home than what they had previously had and people coming from all different backgrounds together to build this country. It is a fabulous history that is unequal to any other country in the history of the world.

“Nowhere on Earth have so many people from such diverse backgrounds and religions come together and become one. We should remember that printed on the back of our dollar bill is the phrase ‘E pluribus unum’ that means ‘one from many.’ When you look at Europe and see the issues that they are having with refugees, it makes one feel very proud of the United States for what we have done with people from all over the world to become one country.

“Here in our city, we are very diverse, and that is good for the community. It brings people from different backgrounds together. We learn from one another and share ideas with each other, so that we can make progress with all of these different viewpoints represented.”

On the point of bringing varying opinions and ideas together, Brainard mentioned that he is looking forward to working with the City Council members and expressed his thoughts on the new tone and tenor of the working relationship between his office and the council.

“I am looking forward to good solid discussion about how to get things done in the best interest of the taxpayers without political grandstanding,” Brainard concluded. “Conversations, discussions and disagreements that lead to concessions and compromises are good. Political stunts are not good for the community, and they hurt our city’s reputation.

“Each person on the new council and I have pledged to each other that we are not going to do that. We know that we are going to have disagreements, but we are going to respect each other’s opinions and work in an honest and forthright manner to compromise whenever possible. That is all I could ever want from a group of elected representatives.”