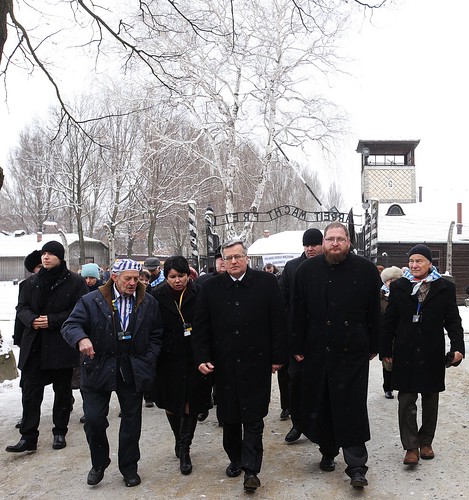 Undoubtedly, there were numerous eerie similarities between January 25, 1945, and January 25, 2015, that were separated by seven decades of time. Both of the dates with significance in world history featured familiar settings in the wintertime in western Poland. The winter weather near the German border can become a nightmarish rerun of frigid temperatures, dark skies and relentless bursts of snow.

“It was Poland in the wintertime,” noted a recent visitor to the Polish site in January. “Gray. It was very gray and cold.”

But there was certainly another haunting comparison that greeted the invaders in 1945 and the visitors who journeyed to the Polish countryside in 2015. In both settings, the silence that seemingly billowed from the drab theater of buildings, bricks and mortar was overwhelming. Despite hundreds of buildings, kilometers of surrounding train tracks and other overt signs left behind by onetime inhabitants, quiet ruled in 1945 and 2015.

“I will always remember how quiet it was when we walked around [the facility],” the guest recalled. “The silence was so gripping.”

But there was one major difference from the Auschwitz death camp that thousands of Russian soldiers stormed in to liberate in January 1945 and the one that 300 world leaders and dignitaries traveled to in January 2015 to note the 70th anniversary of the liberation of the Holocaust horror chamber. 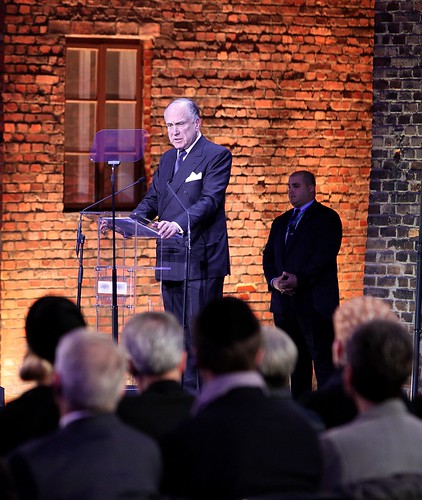 When the Russians broke into Auschwitz, 7,000 helpless prisoner survivors remained, most of those suffering ramifications from terrifying starvation and horrific illnesses. Some camp residents would survive for another chapter of life in Europe, Israel or the U.S. But many would not. On the 70th anniversary, the crude housing was without any life. All that remained in the barracks and gas chambers were the memories of the 1.1 million people who perished at Auschwitz under the rule of Adolf Hitler and his Nazi regime.

Three months ago, most of the world paused to remember and honor the victims and survivors. Kings and queens, presidents and prime ministers, Hollywood celebrities like Steven Spielberg and relatives of those who lost family members in the atrocities toward the European Jews and others traveled to Auschwitz to be part of the event. And not to be forgotten among the guests was a dwindling number of genocide survivors such as 96-year-old Yuda Widawski and Paula Lebovics, 81, who was a hungry 11-year-old girl when she was lifted up by a Russian soldier who rocked her tenderly in his arms as tears came to his eyes.

Also included in the anniversary crowd were three Hoosiers who said prayers for the dead and lit candles at a monument. One of those present was Carmel philanthropist Cindy Simon Skjodt, the daughter of Melvin and Bess Meshulam Simon, descendants of Austrian-Hungarian, Russian, Greek and Turkish Jewish families who came to America earlier in the 19th century before the rise of the Nazis. Joining Simon Skjodt were daughter Samantha and Fonda Crandall, executive director of Simon Sjkodt’s Samerian Foundation. All witnessed history, and each was moved to tears in the moments of sharing a life experience.

The following is a one-on-interview with Cindy Simon Skjodt that has been slightly altered for clarity and abbreviated for length: 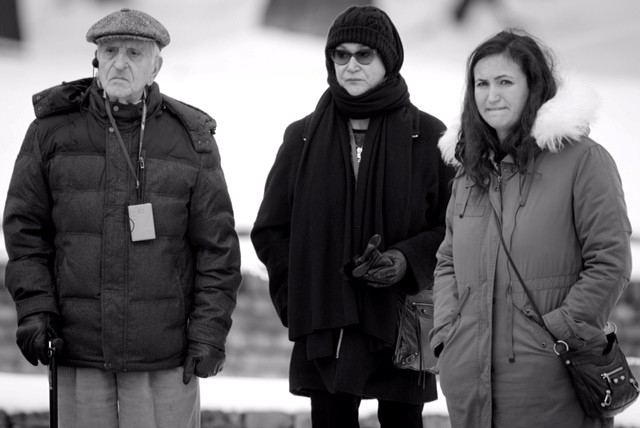 Both of your parents’ families had immigrated to the U.S. and were not part of Europe during World War II. Do you know if your extended family may have suffered during the Holocaust?

“I don’t for sure know if we may have had cousins or others who were victims. I looked through the list of names but didn’t find any Ashers [a previous family name on the father’s side] or Simons.”

When and why did you decide to take the trip to Poland and Auschwitz for the 70th Anniversary event?

“I have always been interested in the Holocaust, though I couldn’t always grasp how this could happen. I went to the Holocaust Museum [in Washington, D.C.] two years ago, and I saw the how [the Nazis] went through the propaganda steps and then the final solution. I had always given some money to the museum, but then I had an event here to raise some money.”

“He read a letter written by his mother to his father. Everyone cried. I knew that I wanted to do more, especially for future generations and so that people don’t forget. That’s what got me on the path.

“Then a couple of months later, I got a call saying the museum was taking a delegation of about 30 people who were sponsors or had given money. They asked if I wanted to go. I said yes. [My husband] Paul couldn’t go, so I decided to take Samantha, thinking it would be good for her. When another ticket opened up, I wanted to take Fonda who has been with us for 25 years.”

The first stop on the trip to Poland was a two-day tour of Warsaw and the few remains from the Warsaw Ghetto. A train took the somber tourists to Krakow, located 37 miles from Auschwitz. Ironically, while Warsaw lain in ruins after the war, Krakow was virtually untouched since it housed the headquarters of the SS troops. Buses took the visitors on the last leg to Auschwitz. 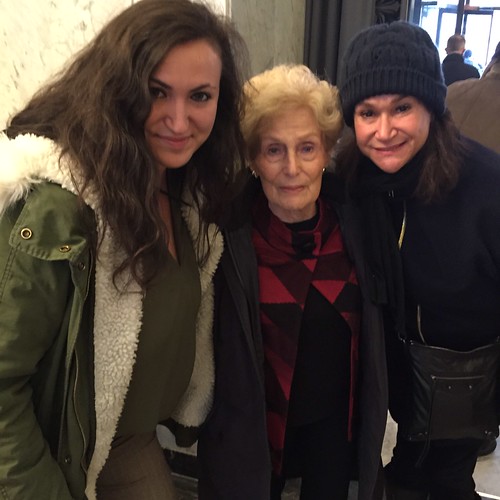 What was it like for you as the bus pulled into Auschwitz?

“The place was just massive [25 square miles]. It was a city that was renamed Auschwitz.

“It was freezing, and they built a huge tent at the front gate, so the survivors would not get ill. I was in Normandy for the 70th anniversary, and this was the 70th year of the liberation. I think they are doing this because everyone knows we are losing those folks.

“The day we had the tour, it was very cold. I will never go back to Poland and Auschwitz, but it was very heart-wrenching and life-changing.”

Can you tell us more how it was a life-changing experience?

“I guess I looked at the survivors and how so many of them survived and have had a lust for life. They felt they had a second chance to make something out of themselves. It makes me think how I need to do something like they have done. They were incredible…and their forgiveness brings tears to my eyes. I don’t know if I could have done that, but maybe that is why they survived. They had that inner strength.”

One of Simon-Skjodt’s prized pictures from the trip is a picture of daughter Samantha with one of the female survivors.

Did you feel the presence of those who died at Auschwitz?

“Absolutely. There were 1.1 million people who died there. It is the largest cemetery in the world. You see the guard towers, the barbed fences, the barracks….they had no blankets and maybe one kerosene lamp in a barrack. I don’t know how they survived. If anyone believes the Holocaust didn’t exist, they should spend a night there.

“It’s mind boggling how many families were wiped out, some of them dying in train cars even before they got there.

“You are amazed at what you hear from the survivors. They were there.”

The barracks at Auschwitz held over 250,000 living human beings. Many worked at adjoining camps, assisting the German war efforts. Others were separated after deployment from the trains. The young, old and invalid would be immediately marched to the gas chambers.

How important is it to retain the history of the war, Holocaust and genocide pursuit?

“It is very important. That’s why I took my daughter. They tried to destroy many of the camp items, but they couldn’t destroy the gas chambers since they were underground. We have to remember what happened, so it will never take place again.”

The tour did not stop by a pond inside the camp. The murky pond still is a final resting spot for many victims as their fragments of bones and ashes were taken to the pond after they perished in the crematoriums at Auschwitz.

Among the items at the camp is a listing of the countries where the victims lived before the Holocaust. Poland had 3.1 million Jews before the Holocaust. It lost 2.9 million of those Jews. Among the names discovered on the list of Auschwitz victims by the Indiana trio was the last name of an accountant used by the Simon Skjodt family in Indiana. The victim was the accountant’s father.

“When you went into the gas chambers, you could feel the presence of the victims. It was overwhelming. I was emotionally drained. It was so hard. We all took it so hard. I was glad I did it, but I would never go back again to Poland and Auschwitz. It was too traumatic.”

Would you advise others to go to Auschwitz?

“I would. We can never forget. We have to remember the era, the time and the conditions. People were looking for scapegoats. It was not a war against religion. It was against people who they thought were too powerful.”

What would be your closing assessment of the Auschwitz experience?

“It was somber, very somber. When we left Krakow, they asked everyone to get up and talk. I couldn’t do it. But Samantha got up and said that she was going to get her generation involved. I hope she does.”

“We need to be kinder to each other at home and in our communities. We have to take care of each other. We need to live not only for ourselves but also for other people. Just participate in the human spirit.”

Since her return from the Auschwitz visit, Simon Skjodt and her husband have donated $20 million to the U.S. Holocaust Museum toward a center to prevent genocide. The location has been renamed the Simon-Skjodt Center for the Prevention of Genocide with the goal of researching and developing initiatives to prevent genocide throughout the world. As is the case with many of her foundation’s efforts, Cindy donated the funds on behalf of her father, Melvin. 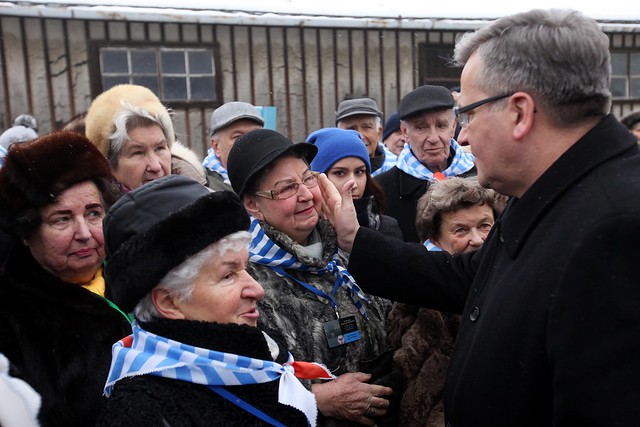