It was a long time ago when Carmel athletic director Jim Inskeep ran out of fingers, thumbs and toes when counting the state championships his Greyhound teams have won during his 13-year tenure as the czar of Carmel athletics.

But despite that long list of championship accomplishments, there is one tournament triumph that stands the tallest for Inskeep. That special delivery arrived in March, 2012 when the boys basketball team stunned the state of Indiana and collected Carmel’s first boys basketball title in 35 years. It took only one more year to stake claim to a third state trophy but it was that victory over Pike in 2012 that still sends goose bumps through Inskeep.

“It was very special after what the program had been through,” Inskeep said. “I don’t think any of us saw it coming.”

The Greyhounds were still charred from a disastrous 2009-10 season in which an ugly internal episode stripped away four players midway during the year and in the off-season forced out an entire coaching staff.

Rebuilding would be challenging, painful and probably slow. New coach Scott Heady and the Greyhounds pieced together a modest 10-13 record in 2010-11. But  next up was the 2011-12 campaign and basketball pundits were not forecasting major achievements.

They misfired on that prediction. Big time. Not only did Heady mold a pass first, shoot later team, but the Greyhounds roared through the tournament by an average winning margin of 12 points. In most games, the Carmel “four-guard” lineup seemed to be the underdog. That was true on March 24 when they sped past Pike 80-67 in the 4A championship game at Bankers Life Fieldhouse.

A huge cloud lifted over the Carmel boys basketball program that night. A new chapter had been scripted. Another title arrived just 12 months later. But it was this Band of Basketball Brothers on East Main in 2012 that left their names for the history books in Indiana.

So where are those conquering heroes today? Are they earning fat paychecks in the NBA? Are they appearing on big time nationally televised college games from Lexington, Lawrence or Bloomington?

Hardly. As we discover, they are all still successfully flying under the radar in places such as Holland, Michigan; Burlington, Vermont; and Lakeland, Florida.

The Shooting Guard
It should come as no surprise that Ben Gardner has become a deadly three-point marksman for the Flying Dutchmen of Hope College. In his first two years at the Division III school in Holland, the 6-foot Gardner averaged 12.1 points and been Hope’s top threat beyond the arc.

It was Gardner’s 31 points in the title game that left Pike staggering at the end. But Gardner admits his best memories of the tournament run came in the Sectionals and Regionals. 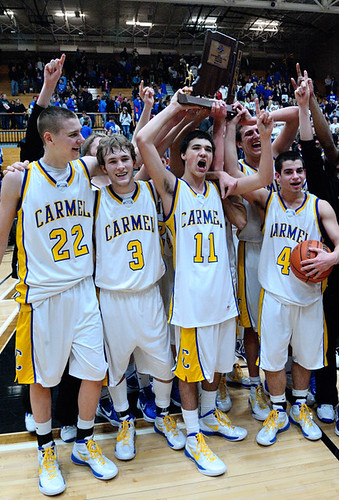 “Those were my favorite memories,” he said. “We beat teams in the Sectionals and Regionals that we had played during the regular season so it meant a lot to beat them when it mattered most. Celebrating those wins with my teammates and coaching staff are memories that I won’t forget.”

And someday Gardner will have wonderful memories of his days at Hope. Hope regularly fills up its fieldhouse and has led Division III schools in attendance, an average of 2,459, for 12 straight years.

“The environment is really cool during the games,” Gardner said. “We have the ‘Dew Crew’ and they provide a ton of energy and make the games fun

“I went to Hope because of its successful basketball program, academic excellence and the Christian environment it provides. After meeting the people I met when I visited, I could tell it would be a sweet school to play basketball.”

The Little Brother
He had a well-known name before he walked into the Carmel gymnasium. His older brother, Josh, had starred for the Greyhounds, gone to Duke and was a member of the NBA. Thus, big things were expected for Zach in 2011-12, even though he was just a 6’6” sophomore.

He played his typical stand-up role against Pike. McRoberts scored six points, snared eight rebounds and provided the Greyhounds with inside defense against the athletic Red Devils.

Today, he is a freshman at Vermont and turning heads.

“I first saw Zach on the AAU circuit,” said Vermont coach John Becker. “I love the way he played.

“He is going to be a big part of our team. He has added 20 pounds and has adjusted to the college game. We emphasize defense and rebounding so he is my kind of player. He has a huge upside and his best basketball is definitely in front of him.”

For McRoberts, the Catamounts have become a great next step.

“The fact that Vermont is a winning program was very important to me,” he said. “Coach Becker values the principles of defending and rebounding which was something I was very familiar with at Carmel.”

The Point Guard
Florida Southern basketball coach Linc Darner hails from Anderson, Indiana and has a secret when he recruits Hoosier basketball players.

“We bring them down in April,” said Darner. “It is 75 and sunny here. They are ready for some warm weather.” 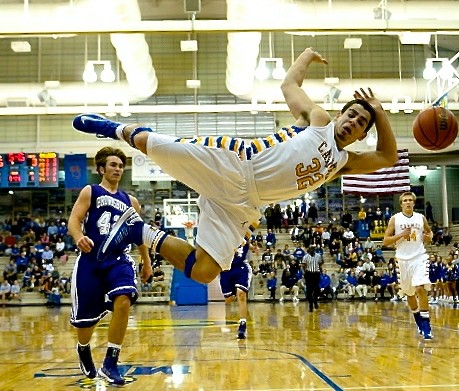 And such as the case when Darner learned that point guard Michael Volovic was looking to transfer from Butler after his freshman season. Darner talked to Heady about the former point guard and quickly got Volovic to the Moccasin campus on Lake Hollingsworth.

“When I came on my visit the players really made me feel at home and welcomed,” recalled Volovic. “Southern was the school that seemed to want me the most. I realized I rushed into a decision (to attend Butler) so I made sure to take my time and find a school that would be a perfect fit.”

Darner, who played for Gene Keady at Purdue, was ready to snap up another snowbound Hoosier. He has three other Indiana imports on his roster. And he has immediate plans for the point guard who stabbed Pike with 19 points and seven assists.

“He’s a great, great kid and he has adjusted well,” said Darner. “We see him playing a lot and we are counting on him. We can play one, two or three point guards at one time. Not only can he shoot from three, but he can take the ball to the basket.”

The Freshman
Despite holding a lead for most of the game, Heady was concerned that the Greyhounds were having a difficult time putting away Pike. He was worried that it could turn into a free throw shooting contest and he believed he needed one more shooter on the court for the last minute. At the end of the bench was a scrawny 5’9” freshman.

“It was a stressful moment,” reminisced today’s senior.

The freshman didn’t go to the line, but did dish an assist to Gardner who buried a three-pointer that helped Carmel tucked away the win.

Today, the freshman is now 6’5” and ticketed for Purdue and the Big Ten after he leads Carmel for one more run at a state title. Ryan Cline will always remember the 2011-12 team.

“We didn’t have big time, Division I players,” he recalled. “But those guys played as a team. There were no selfish players. They knew what it took to win.”

Before going to West Lafayette, Cline hopes this year’s Greyhound version will uncover the same formula after falling to Hamilton Southeastern in the sectional finals last March. “It was very disappointing,” he said.

“Ryan will be ready for the Big Ten,” said Heady. “He works as hard as anyone in our program and is very focused on continuing to improve. He has worked hard and developed into a top Mr. Basketball candidate.”

Supporting Cast
It is probably wrong to put an 18-point scorer into this category but Sam Curts poured in 18 points in the Pike victory. Today, Curts is a student at Indiana, along with another starter, Karl Schneider. Both have passed on playing college basketball.

Another member of the 2012 championship team was rugged 6’6” reserve Shawn Heffren, now a starting defensive lineman for the Hoosier football team.

One Last Review
Heady predicts continued success for members of the 2012 championship group.

“The state championship was a tremendous accomplishment,” he said. ”But it will not define any of these guys. I believe they will go on accomplish much greater and more important things in life.”