Over 30 years ago, Indianapolis had the honor of hosting the annual United States Council of Mayors (USCM). Last year’s USCM was held in San Francisco, but this June, it’s coming back to Indy.

Mayor Brainard, one of the 13 trustees for the USCM, has attended these annual conferences and is excited for it to be hosted in Indianapolis this year. More importantly for Carmel, Brainard reached out to Mayor Joe Hogsett, and Hogsett accepted Brainard’s invitation to have Carmel host the mayors for an evening.

The USCM is the official non-partisan organization of cities with populations of 30,000 or more. The primary roles of the USCM are to: promote the development of effective national urban/suburban policy, strengthen federal-city relationships, ensure that federal policy meets urban needs, provide mayors with leadership and management tools and create a forum in which mayors can share ideas and information.

“The USCM is meant to influence federal policy in a favorable way towards cities” Brainard explained. “We discuss every imaginable topic from parks, early childhood, climate, road funding, culture, city livability issues and anything that going on at the federal level. Whatever Congress is looking at, we are discussing it at the USCM.”

Since it’s a presidential campaigning year, Brainard said that it is possible that the USCM in June may be visited by some of the presidential candidates. The conference is already a main attraction for major news networks, and their media affiliates and should receive sizable coverage while in the heart of the Hoosier state.

Brainard revealed his plans that are still developing to host the mayors on the first night of the USCM conference. 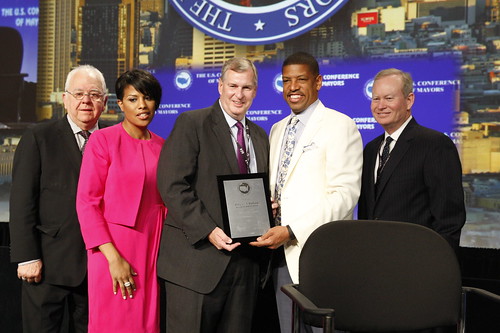 “The conference is in Indianapolis for four nights,” Brainard said. “The first night, we are going to bus all of the mayors in attendance up here to Carmel. We will enjoy a brief show by Michael Feinstein at the Palladium, an elaborate picnic with musicians on Center Green and then there will be an after party on Main Street, which will be closed to vehicular traffic for the event. The galleries will be open extended hours, and it will be quite an event.

“We expect to have approximately 400-450 mayors in attendance. It was nice that Mayor Hogsett reached out and accepted our city’s invitation to host a ‘night out’ here in Carmel to show the mayors from all over our country who Carmel is and what we have accomplished here.”

Carmel Magazine is proud to be one of the approved media outlets to cover this year’s USCM, special appearances and the events as they unfold in Indianapolis and here in Carmel. For more details and coverage of the upcoming conference, stay tuned and follow us on our social media outlets and at townepost.com.

Later this month, the city of Carmel, will be welcoming attendees to the Rotary District 6560 Conference that will bring in Rotarians from all over Indiana and will be hosted by the Rotary Club of Carmel. The conference will be held at the 502 East Event Centre located off of East Carmel Drive. Conferences, such as these, are beneficial to the local economy as attendees will likely book hotel rooms in the immediate area. Guests of the conference who have never been to Carmel may take note of some of the city’s shopping, dining and entertainment attractions and plan a return visit.

“In addition to the economic benefits that come with hosting conferences, this is another opportunity to showcase Carmel,” Brainard expressed. “It’s way to promote our city and maybe even attract future residents that may choose to move here.” 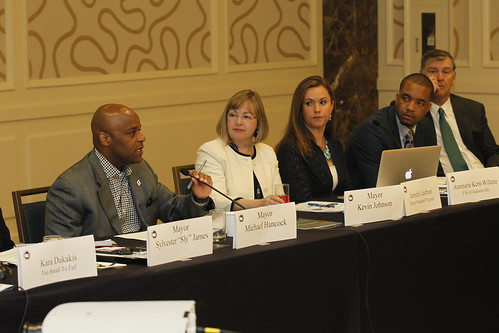 In other news, Brainard weighed in on the city’s efforts to assist with workforce attraction and development, a rather popular topic of discussion. Enough so that Edward Cone, a renowned expert, will be speaking at the All-County Luncheon hosted by OneZone in mid-April. With cities like Pittsburgh, Louisville and other similar markets focusing on strategies to address the needs of a changing workforce and workplace, our city’s leaders also have pulled together their resources to address the needs within our county and city.

“We are doing a good job attracting companies, but the companies will only come to Carmel if there is a workforce,” Brainard said. “Carmel’s doing what we can to attract people. Over the holidays, we put up ads at the Indianapolis Airport, thinking that we may catch the attention of people traveling here to visit. We directed people to a landing page on our website where they can learn more about Carmel and everything that we offer. We will probably continue with similar efforts throughout the year.”

Brainard mentioned that the biggest challenge to Indiana, specifically central Indiana, regarding attracting people and companies from outside of the region is simply our natural topography or lack thereof.

“We do not have the mountains or oceans that some of the other cities do,” Brainard stated. “We have to work even harder at making sure that our environment is exceptional and interesting. The central Indiana market is a cool and fun place to be with a lot of opportunities for those who like sports, cultural activities and many other wonderful amenities for people to enjoy.

“In Carmel, we have focused on building walkable, pedestrian-friendly neighborhoods and bike trails and have wonderful amenities like the Monon Center, the Center for the Performing Arts, the Farmer’s Market, Winter Market and many more amenities that we offer our residents, companies and employees.”