Putting the Marvel in Marvelous

While he dabbled in woodworking all throughout his adolescence and early adulthood, Marvel was also interested in the drafting and engineering side of building products. Keeping the dream on the horizon that he would one day retire from his day job and start a woodworking business, Marvel did not realize that the economic downturn in the mid-2000s would actually launch his new career and fulfill his goal earlier than planned.

Marvel created Marvelous Woodworking in 2009 and has grown to be known as a reputable specialist in custom woodworking and household furniture projects. Marvel has taken his knowledge that was passed onto him from his grandfather and father and has combined this with his education and training in drafting and engineering to become a highly-skilled and passionate woodworker and inventor.

He designs and produces his projects out of his work shop in Lebanon that boasts a 1,800-square-foot garage with 12-foot high ceilings and an abundance of workspace for his myriad of high-grade tools and lumber supplies.
Marvel specializes in custom woodworking projects such as staircase updates, custom fireplace mantels, handcrafted furniture, custom cabinetry, coffered ceilings and crown molding.
Marvel’s work is truly customized and built specifically for each of his of clients. He views his relationship with his clients as a partnership that results in creating an heirloom-quality, built-by-hand product.

“Growing up on the family farm, we were always building, creating and repairing things,” Marvel said. “We didn’t have power tools so we were drilling, nailing and sawing by hand. My 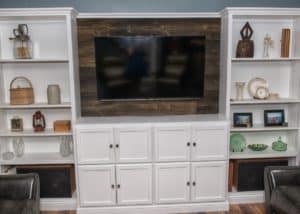 grandfather, who never graduated high school, was the ultimate ‘tinkerer.’ He liked to build clocks. He also built his own saw mill with the big blades and tractor parts, from scratch. He would go out and cut down trees, mill and store the lumber, then he would make things out of it. I have some of his original tools and use his wood lay for my projects. I think of him every time I use it. My dad is also very creative and likes to make up his own little jigs and projects. He really enjoys model airplanes. Engineers and inventors at heart, I like to think that in my own way that I am carrying on their engineering tradition and the creative process that I’ve learned from them.”
Starting out as his hobby, Marvel would take on small jobs for his friends and family while he was working as a computer consultant. He would take his profits and reinvest them back into his shop, purchasing new and additional tools knowing that one day he would “retire from his cubicle, start his wood working business and live happily ever after.”
When the effects of the recession really took hold of the nation in 2008, Marvel’s contractor friends in the construction industry came to him with special projects that they knew he had the skills to take on.

“At this time, I had my own computer consulting firm, but I took on these side jobs for my friends who are contractors and the success of those jobs, along with a little marketing, my woodworking business just took off. I officially retired from my cubicle life and became Marvelous Woodworking in 2009.
It was a time that we saw a lot of small or micro businesses born out of that experience, redefining success. Success isn’t about the dollars. It’s about what you do and enjoying it.”
One rather unique project, historic in nature, that Marvel took part in was the recent rehabilitation of the Parry Mansion located in the Golden Hill subdivision in Indianapolis. Built in the early 19th century by David M. Perry, an automobile, railroad and insurance mogul, the 21,000-square-foot mansion once entertained celebrities like Clark 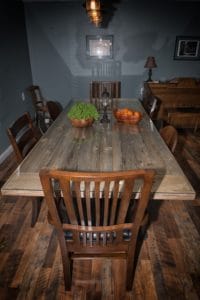 Gable and hosted elaborate parties in the exquisite third story ballroom. The mansion was sold to William Avery Atkins who remodeled and expanded the mansion’s already massive footprint. The mansion’s deed exchanged hands a few more times over the decades and had fallen into decay after being left vacant in 2006. The current owner, John Lethen, decided that the historic mansion was worth saving and brought in various contractors, like Marvel, to repair and remodel the dilapidated structure. Marvel was hired on to revitalize the grand conservatory. He painstakingly recreated the room’s original wood moldings and elegant décor. The before and after pictures of Marvel’s project are astounding. For him, his work in the conservatory has become part of a permanent fixture in the Parry Mansion’s history.

“My clients come to me because they are looking for a very specific, high-quality project or piece of furniture that they could not find anywhere in the existing market. They will bring me pictures of things that they like and get ideas from the various manufacturers and we combine the ideas to create the perfect design and outcome for their unique project. We live in such a virtual world now with computers and other technology and in my previous career, I did computer drafting and used to build things with computer software, but there is something really satisfying about building things with your hands. I am an engineer at heart and I love figuring out the angles and how it comes together and then going out to my shop and actually physically build it. It seems that today, we are losing some of our craftsmanship and are getting most of our things from China, Taiwan, etc. So for me to have a business and a skill where I get to make other people’s visions come to life is very rewarding to me. Unfortunately, in today’s society, there is this stigma that if you choose this line of work, you are somehow under achieving in life. There is this expectation that you have to go to college and get a degree and sit in a cubicle and make a million dollars in order to achieve success. It is a false definition of the ‘American dream.’ There are excellent and creative jobs available in various trades like welding, carpentry, electrical, and other fields within the construction industry. There are many great opportunities to make a good living, creating great things and loving what you do.”