Providing a Lifeline to Teens and Young Adults

Be sure to join us for the Blind Pig Speakeasy Shindig benefitting Indiana Youth Services Association’s (IYSA) “Make Good Decisions” program. The Flapper-style event will be held June 14 at the Columbia Club in Indianapolis and is guaranteed to be the “bee’s knees.”

Carmel residents Norm and Dawn Finbloom are spokespersons for “Make Good Decisions.” Their decision to get involved and advocate for IYSA’s “Make Good Decisions” and Indiana’s Lifeline Law that was expanded upon by Sen. Jim Merritt during the 2014 legislative session came as a result of losing their son, Brett Finbloom, in 2012. Brett, a graduate of Carmel High School, passed away just a week before he was to begin college classes from alcohol poisoning.

Recognizing that their son and his friends made bad decisions, Norm and Dawn decided to empower other teens and their families with life-saving knowledge, teaching about the warning signs of alcohol poisoning, the dangers of binge drinking, Indiana’s Lifeline Law and to basically “Make Good Decisions.”

When asked what drives the couple to continue this ministry, Norm replied, “What drives us is that it sucks to have this happen. We don’t want it to happen to any other parent. That’s as simple as it is. There isn’t a day that doesn’t go by that you don’t think about your child, however you lose your child. It’s not good.”

“I also see the tragedy for the friends that were there with Brett that night,” Dawn said. “They didn’t want to lose their friend either. They just didn’t know enough. Our mission is really for kids and parents to know enough, so that it doesn’t happen.”

Less than a month after Brett’s passing, the Finblooms were asked to speak to the student body at Cathedral High School. The principal implored them to share their story with the students in hopes that it would curb some dangerous behaviors that the administration was contending with at that time. The administrators were looking for impactful ways to address the problem head-on.

“It [Brett’s death] was much publicized because it was within a month of the Lifeline Law being passed,” Dawn recalled. “Norm and I were contacted by the local news to talk about what had happened because they knew that our story was exactly the type of tragedy that the law was trying to avoid.”

The Finblooms decided to speak publicly about their tragic story to as many schools and colleges as possible and as often as they could. The feedback about IYSA’s “Make Good Decisions” program has been successful and cathartic to the Finblooms. Their son, Brett, has become a lifeline for all young people.

“A few months after Brett passed away, we got a knock on our door early in the morning,” Norm said. “It was two parents who looked pretty disheveled. Their comments when we opened the door were, ‘We wanted to tell you that your son saved our daughter’s life.’ Their daughter, who was 15 at that time, had been drinking and drank too much with some older kids. One of the older kids made the call because of having heard about Brett and the ‘Make Good Decisions’ presentations. The parents told us that everything was going to be okay because their daughter had received medical treatment soon enough.”

“When we hear the feedback and of these actual events that have happened, that tells us that the messages are getting through,” Norm stated. “Unfortunately, kids are always going to be kids, and some kids will drink. There’s always going to be that curious mistake made. This [program] is about education and making the kids understand, first and foremost, that when they make that curious mistake and drink too much, somebody knows what to do.”

As June approaches, the Finblooms look to the upcoming Blind Pig Speakeasy Shindig with bittersweet emotions but strongly advocate for people and sponsors to get involved and help the efforts being made by people who truly want young people to make good decisions and save lives.

“I thought it [the theme] was cool for a couple of reasons,” Dawn shared. “One reason is because Brett loved ‘The Great Gatsby.’ That was one of his favorite books and because he was known on the soccer team for making this pig squeal. Lastly, regarding the bowtie on the pig logo, Brett was known for sporting those. He got the ‘best dressed’ award at Carmel graduation.”

IYSA is seeking additional sponsors for this incredible event. The event’s title sponsor shared this statement as to why they chose to be involved:

“Jive/LogMeIn chose the Indiana Youth Services Association (IYSA) in conjunction with TruWerks to assist in supporting youth and families in the great state of Indiana. The educational programs and materials presented to both high school and college-age students help them incorporate the ‘Make Good Decisions’ message into their daily lives. We are proud to be a part of it.”

Please consider contributing to this powerful message and program by being a sponsor and/or purchasing tickets for this shindig. Visit indysb.org/blindpig for more details. 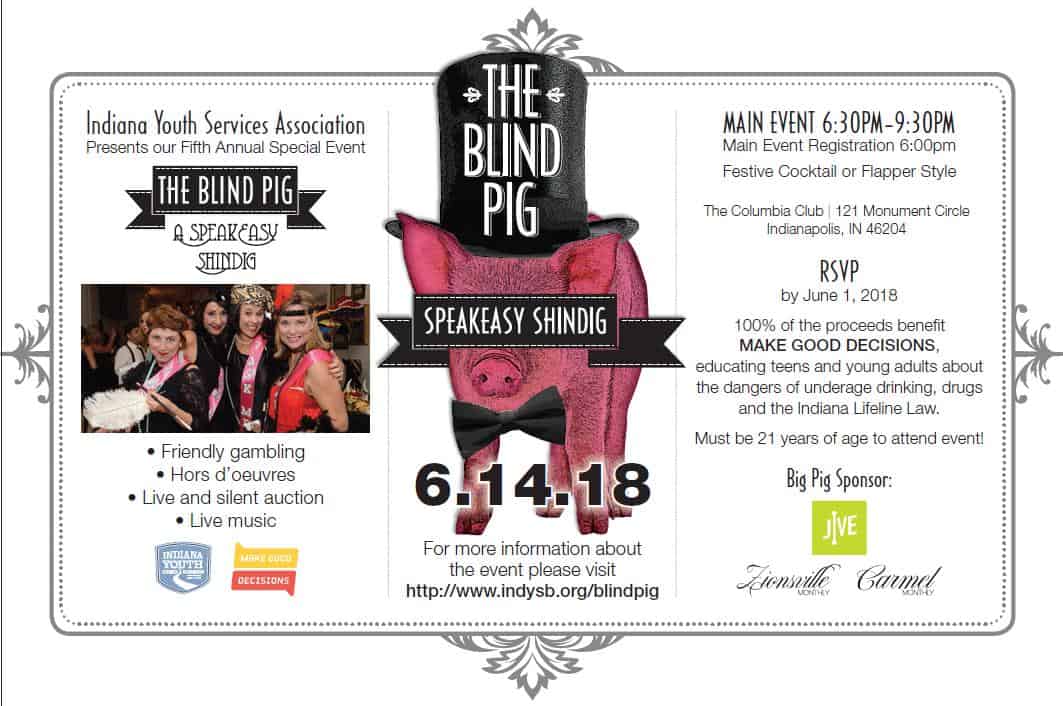