Pippa Mann #GetInvolved at the Indy 500 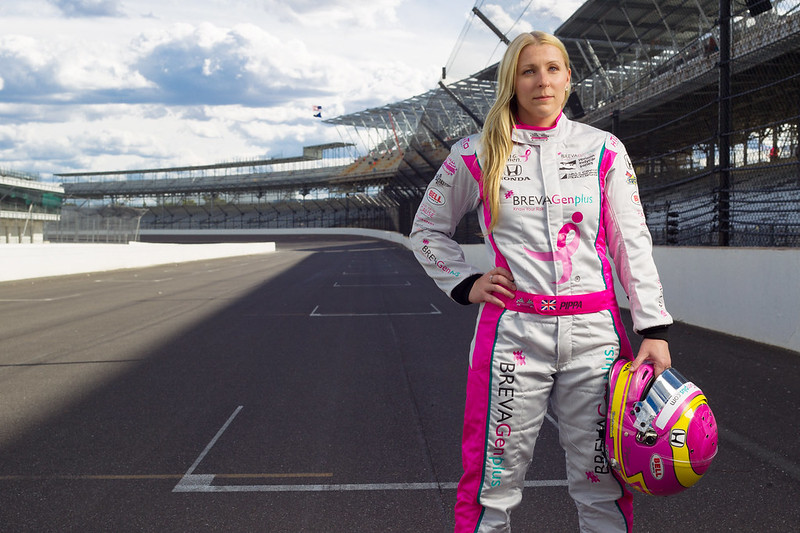 Pippa Mann is used to attracting attention for her athleticism rather than for the color of her clothing or race equipment. That all changed back in 2014 when she formed her partnership with Susan G. Komen. Mann was inspired initially to change her decade-long red and yellow helmet to pink with the intent of donating it as a fundraiser for the Komen Central Indiana auction.

But realizing the Indianapolis 500 was, in Mann’s words, “a massive national sporting event,” she and her team owner, Dale Coyne, presented their idea to Komen’s national organization. By the time they were done, they created a unique partnership that involved Team Coyne and Mann donating the entire title sponsorship of the car, everything from the helmet to racing gear, and the race car became pink. 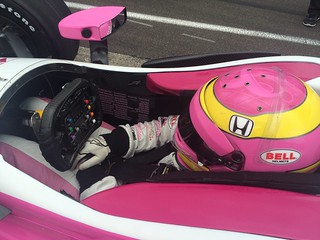 Last year’s Get Involved Campaign raised $61,000 through placing names of loved ones inside the cockpit of Pippa Mann’s IndyCar during the Indianapolis 500.

For a team owner to basically gift the entire title sponsorship of the car, they are gifting their most valuable real estate away, but it has also opened doors to include so many more individuals and companies who all had the same desire to create awareness of the fight against breast cancer.

Mann says, “This program is not an easy one to put together each year, but it’s an incredibly rewarding program to put together and be a part of, and I could not do any of this without the incredible support from my team Dale Coyle Racing. They are a massive part of being able to make this happen.”

At first, Mann was concerned about standing out saying, “I have never been the girl in pink at the race track. I never wanted to stand out in that way,” she said. However, she noticed that fans would wait outside her garage to share their personal stories with her.

“I started to learn so much more about this color that I always eschewed,” Mann said. In the first year of the partnership, she was worried whether her fans would understand that this was not a “sponsorship,” that they were not taking money from a charity to run a race car. But much to Mann’s surprise, the reaction was overwhelmingly positive. “We have so many survivors, co-survivors and those that have lost loved ones reaching out to me each year. It’s been an incredible experience.”

As the program has evolved, the “Get Involved” campaign was created last May when fans did not connect with her original online campaign, “Race with Pippa.” Mann explains that the “Get Involved campaign connects fans through an Indiegogo crowd funding platform which allows them to purchase specific items in support of the racing program.” Mann notes that this allows funds to be raised to donate to Komen.

The most impactful part of the program was giving people the opportunity to place the names of loved ones in the cockpit of the racing car with Mann. “Climbing in on race day last year surrounded by all of those special people was a pretty incredible experience for me personally, and both of those items are things we want to bring back for 2016.”

With these two campaigns combined, they have raised over $100,000 with the Get Involved Campaign generating $61,000. The goal for 2016 is to raise $100,000 which Mann feels nervous about but excited, and at the same time, she feels confident they can accomplish this goal because they have more people supporting the partnership than ever before. 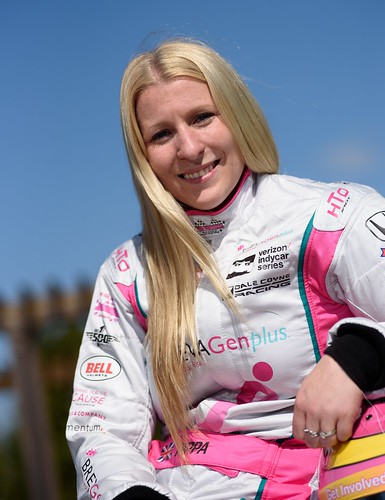 “We spoke to many people who wanted to get involved in helping keep the pink Susan G. Komen logos on our racing car, but for many smaller businesses the entry price point of true sponsorship on an IndyCar is just too high. We still wanted to find a way to harness this support and get these companies involved in the racing program.” Ideas were brainstormed, and the Pink Car Collective concept was developed.

The concept was to offer sponsorship opportunities that would allow companies to become part of the racing program and support this car on the track while selecting what other opportunities are important to them. This might be VIP invites to the team dinner, suite tickets for the day or even entertaining clients on Carb Day.

This unique partnership will offer other business-to-business opportunities for companies to connect with the other sponsors in the program. Mann works tirelessly to ensure the success of her partnership with Susan G. Komen year round and not just during the month of May.

Pippa Mann is an accomplished race car driver that is as passionate about racing as she is about putting breast cancer in the rearview mirror. For Mann, the color pink is more than a color. “I am proud to stand with everything and everyone that it represents.”

To find out how you or your business can become involved, contact Mann at her website, pippamann.com, and on social media where she can be found inspiring young girls to believe in themselves, follow their dreams and undoubtedly encouraging them to wear pink.