Pink Martini at the Palladium

For over two decades, this “little orchestra” of a dozen musicians and vocalists has delighted audiences around the world with its multilingual mix of jazz, classical and old-school pop music. Led by pianist-founder Thomas Lauderdale and vocalist China Forbes, the Portland-based band has collaborated and performed with artists as diverse as Carol Channing, Rufus Wainwright, filmmaker Gus Van Sant, NPR host Ari Shapiro and the cast of “Sesame Street.” Pink Martini’s ninth and latest studio album, 2016’s “Je dis oui!” features 15 tracks spanning eight languages. Storm Large, who recently performed at the Palladium, is also a member of Pink Martini. Pink Martini will be coming to the Palladium Saturday, March 17 at 8 p.m. Visit thecenterfortheperformingarts.org for more information. 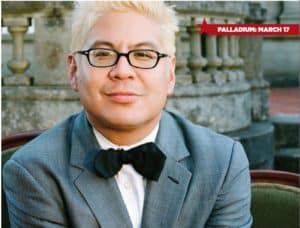 We interviewed Lauderdale who had some Hoosier roots in his early life. He is looking forward to entertaining at the renowned Palladium and to introducing the audience to an evening with Pink Martini, an experience boasting with culture and diversity.

Born in Oakland, California, Lauderdale was adopted by his parents, Kerby and Linda. In 1972, the family moved to Indiana, near North Manchester. Lauderdale began his classical piano studies at age 6 with two instructors from northern Indiana. His upbringing was unique and unorthodox as Lauderdale explains in our interview, but his parents’ support and his talent would lead him on a remarkable journey that would eventually lead to the genesis of Pink Martini.

What was your early childhood like with your family in Indiana?
I had a pastural upbringing amidst the fireflies and thunderstorms. My parents had a plant nursery, Lauderdale Nursery, just north of Manchester and west of Warsaw, Indiana, on State Road 14. My parents were Caucasian and adopted a “rainbow tribe” of children. My parents were from the earnest side of the 1960s. While they weren’t particularly musical, they listened to music. My childhood consisted of Ray Thomas, Ray Charles, Roger Miller, the Mormon Tabernacle Choir and the soundtrack to “Jesus Christ Superstar.”

When did you begin your classical piano training?
I started piano at age 6 with Patricia (Pat) Garrison who was from the area and later with Joyanne Jones at Indiana University–Purdue University in Fort Wayne.
What prompted your family to leave northern Indiana and move west to Portland, Oregon?
In 1980, my father came “out of the closet,” and my parents divorced but remained close friends. This is unusual, even for today. My parents had discussed this before they married, but some people thought that if you got married, “it” [homosexuality] would go away. My mother wasn’t “tricked,” and I think that’s why they remained close afterward. We all moved to Portland to keep my family together.

I thought that I was going to go into politics. I wanted to become Mayor of Portland. I wanted a broader education, applied to liberal arts colleges and ended up going to Harvard. As a sophomore, I could select where I wanted to live, so I lived in Shattuck International House. It was very well landscaped and was a concentrated house full of “freaks” and brilliant people. It was like going to a completely different school and was different from the rest of campus. I really blossomed there. When I went back to Oregon, I had a contract with the Oregon Symphony to play classical pieces and went to work in politics.

What made you divert to a totally different career path?

In 1994, there was an attempt to make homosexuality illegal in Oregon. I was working on the campaign in opposition to it. I had just seen the Del Rubio Triplets on Pee Wee Herman’s Christmas Special. That special featured several major stars like Cher, Grace Jones, Frankie Avalon, k.d. lang, Charo, Oprah Winfrey, Magic Johnson and many more. The Del Rubio Triplets were super Catholic but pro-gay. They played guitar and sang covers of songs like “Walk like an Egyptian” and “Whip It.” I brought them into town to sing at local nursing homes, retirement homes and hospitals. At the end of their set, they would say, “Please vote no to Measure 13.” They were performing at a community fundraising concert and needed an opening act, so I threw on a cocktail dress and started playing. (Lauderdale was joined by a bass player, bongo player and a singer, and Pink Martini was born.)

Do you feel that you are making more of an impact as a musician rather than a politician?
I never intended on becoming a band leader or ever being in a band. I thought I was going to try to become mayor, but as the years passed on, I realized that my career was going to be in music. Instead of working under fluorescent lights, we get to travel the world. Instead of “hate” mail, we get applause every night.

Have you performed at the Palladium before? How long have you known Michael Feinstein?
I haven’t seen the Palladium in person yet, but everybody that I talk to has told me that it is an unbelievable venue that sits in the center of Carmel, Indiana. I’ve known Michael for more than a decade. When I’m in New York City, I practice at his house. We recorded together for his more obscure tribute record to Sinatra (“The Sinatra Project”). Feinstein is one of the most important people working today in music and is certainly a champion of The Great American Songbook.

What should the audience expect at Pink Martini’s performance at the Palladium this month?
The idea is that by the end of the night, everyone is out of their seats doing a conga line. Our audience is generally very diverse. We appeal to people of all ages, conservatives and liberals and everyone in between. We bring together people who normally would otherwise never sit under the same roof. The goal is to make people so deliriously happy that they will be enjoying a moment with one another despite any differences.