Phantom of the Opera Comes to Life in Carmel

Fans of Broadway musicals are in for a spectacular production of “Phantom of the Opera,” right here in Carmel. Personally, I have seen the Tony Award-winning production several times and have an affinity for the challenging musical compositions, the costumes, and of course, the brilliant set designs that create the haunting splendor of the Paris Opera House and disturbing recesses of Phantom’s labyrinth. I met with the director and the two leading actors to discuss their individual passions for producing and performing such an iconic production.

The familiar story of a disfigured man who haunts the opera house and falls in love with his protégé has been wooing audiences around the world for decades. The musical scores by Andrew Lloyd Webber and lyrics by Charles Hart will be performed by the CHS’s orchestra, composed by Michael Pote, director of bands, and by a company of 190 members of the cast, crew, and orchestra. 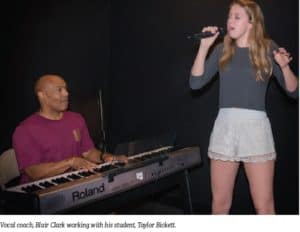 Directing the premier of this CHS production, John Burlace, a director of choirs at CHS, shared what a daunting undertaking it has been, but how it has also been rewarding to everyone involved. “We’ve got a number of talented students and staff members who are involved and who are able to pull off a show that most high schools wouldn’t even try to produce,” Burlace said. “’Phantom of the Opera’ is one of those things that has been so popular for so long, and it is unusual that the rights were released while it is still selling out on Broadway. The production is a double-edged sword in that it is a ton of work to produce and a really difficult production, but on the flip side, it’s a production that everybody involved is extremely excited to do, and we’ve had a lot of energy invested on the front end of producing it.”

Burlace explained that the production is inspired by the original. He decided rather than to reinvent it or take a minimalist approach, he would stay true to the original. That meant that the attention to details was crucial to the overall success of the production. The dark and ominous lighting, the majestic staircase for “Masquerade,” the candelabras in Phantom’s labyrinth, the infamous chandelier, and the Phantom’s organ were important accents to the scenes. Along with those, the vibrant costumes (an average of 3-4 for each of the 74 kids, more for the lead roles) and pageantry will grace the stage and delight the audiences.

“People have these images when they think of “Phantom of the Opera,” and we don’t want to disappoint the audiences,” Burlace emphasized. “Part of being in the arts is learning how to be creative with the budget as well. We figured out how we’re going to light the scenes and build them. We figured out how to give the illusion of certain things without having to fully construct them. This all has involved a tremendous amount of teamwork, and we’ve all been committed to making it happen.”

The students who were courageous enough to audition for and were cast in The Phantom, Jake Letts, Christine Daae, and Taylor Bickett, are seniors at CHS. Letts plans on studying musical theatre after graduation at either the University of Michigan or Ball State University. His ultimate goal is to end up on Broadway.

“I’ve been taking voice lessons with my teacher, Leslie Low, for years, but the first time that I truly knew that this is what I want to do, was when Leslie lent me her DVD of the 25th anniversary of ‘The Phantom of the Opera,’” Letts said. “I watched that and immediately knew that I had to do that role. I guess I finished that goal a little bit earlier than I expected to.

Letts continued, “I was given up for adoption before I was even born and have never met my birth mom. Both of my adoptive parents are 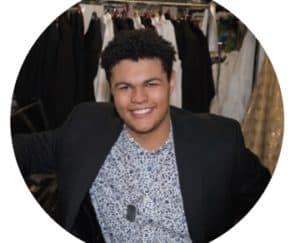 white and going out with them as a child, we were always looked at strangely like, ‘Why do these two white people have this black baby?’ I was made fun of at school, and I felt like I had this type of disfigurement. I felt like there was something wrong with me, and I didn’t understand why. I’ve been told the story about why I was adopted, and I have no resentment towards my birth mother at all. I still have so many questions, and I grew up with that feeling like an outcast because of the way that I look. Once I found music, that was how I healed. It has always been therapy for me. My favorite part is going on stage and doing something that I love and then sharing with the audience. Hopefully making them happy or making it a memorable performance. When I first saw The Phantom, I connected to him and how he used his music to try to connect to people and show how he feels. That’s exactly how I’ve always felt. There are no words that I could speak that would ever be as true as when I’m on stage singing. I understand this character’s pain and rejection. Now that I am 18, I hope to find and contact my birth mother. I would love to bring her to one of my performances as that would be a good representation and the opportunity to show her who I am who I have become. In regards to working with Taylor, I love getting to work with her. She is incredibly talented, and we are pretty comfortable with our roles and know what needs to happen. We are two completely different people, but we work together very well and are comfortable critiquing and helping one another. I am very happy that she was cast as Christine.” Letts’ voice teacher, Leslie Low, has taught him piano for twelve years and vocal lessons for six at her Encore Music Studio in Westfield.

“Jake has never been crazy about singing classical music,” she said. “His heart has always been on Broadway pieces. He’s come a long way in a short amount of time. I think he’s going to do a fine job in the role of The Phantom. He’s been studying that role for a long time. Jake has wonderful stage presence and has been developing that over the years. He has a natural personality that belongs on the stage. I’ve been very fortunate to have him as a student. For Phantom, he is developing a baritone voice even though he started his singing as a tenor. He is very versatile. His high note is a B flat, treble clef and his low note is a G in bass clef. That is almost a 3 octave range. I am quite proud of him and will be following him throughout his career.”

Carmel’s own Blair Clark, who is Taylor Bickett’s vocal coach, has been preparing Bickett for the challenging role of Christine at his studio, Coach Blair’s Voice & Performance Studio in downtown Carmel. “I grew up singing along to Radio Disney and Hannah Montana,” Bickett admitted. “I started working with Blair when I was nine years old. I had been in the Indianapolis Children’s Choir and several school musicals. My mom got me into music fairly early because she heard me singing in the crib at age two, and her friend was over and asked, ‘How does your baby have such pitch?’ When I met Blair, something clicked. He’s helped me grow so much. I started with little competitions and then got involved with the middle school musicals and have been exploring different styles of music that I am able to sing. I have grown exponentially since I’ve met Blair.” 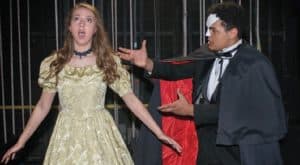 Bickett continued, “As soon as I found out that the musical was going to be The Phantom, I was like ‘That is definitely something that I am not used to.’ We did “GodSpell” last year, and I had the rocker girl, whistle tone, belty girl part, and I am not used to singing in the classical style. I started bringing songs to Blair to work on. My range has increased a lot, and it has taken a lot of work. Working on this role has pushed me out of my comfort zone. I am more of a singer than an actor, so it has meant that I had to work more on my acting techniques. I was super nervous during the audition, but I was comfortable with my material. The audition pieces were definitely challenging. The day I found out that I was cast, I burst out laughing. Then, before I could make it down the stairs, I just collapsed and started to cry for nearly five minutes before I could even get up and tell my mom. I was just in awe. It was crazy. Working with Jake has been so cool. He has such a beautiful voice that is so rich and deep and exactly what you would expect The Phantom to sound like. Singing with him feels like we’re on the soundtrack. We’ve worked on our expression and musicality parts. We enjoy singing with each other. I picture opening night and it will be a lot of the kids from Amassadors, who are in the production, and are my closest friends. I think it will be cool because the opening scene will have most everyone on stage, all my friends will be beside me and my loved ones will be in the audience. I am so excited for what that’s going to be like. After school, I will be going to Nashville to Belmont University to major in commercial music. It is one of my favorite cities, and I fell in love with it when I first visited. I feel connected to the music industry there. I feel like this is the place that I am supposed to be to figure out what comes next for me.”

“When I look back at the first time that I heard her sing, I told her mom that she’s got the ‘It’ factor, she’s got it,” Blair Clark recalled. “It was a combination of her natural God-given talent and her sense of drive. She has always come to me with something different to work on, a totally different genre of music than the last. Taylor is a coach’s dream-to have a student who uses her voice as an instrument. From facial expressions to hand gestures to vocal range and breath control, she’s got it all. It is a gift to be able to work with her. The journey has been awesome. In the music industry, there are so many hills and valleys. There are competitions and awards and rewards. What I respect about Taylor, is her ability to deal with the rejection and the rewards with balance and grace.”
Do not miss the opportunity to see this incredible production that will spotlight some of Carmel’s most talented artists, musicians, and staff members as the curtain closes on another brilliant school year at Carmel High School. For tickets and show times visit ticketracker.com or the CHS bookstore.