A Tribute to Pete Estes: An Iconic Man and His Car

Fifty years ago, an American icon was born when the very first 1967 Chevrolet Camaro was sold. Since then, more than five million units have been sold of the six generations of the Camaro. The car’s rich history and evolution over the past five decades are being honored at this year’s Carmel Artomobilia with a reverent and remarkable display that will feature the 1967 Chevy Camaro RS that was owned by the man who put the Camaro on the map, the late Mr. Elliott (Pete) M. Estes.

Estes was an engineer who rose through the ranks of General Motors (GM) to be its 15th president. He was a true pioneer in the auto 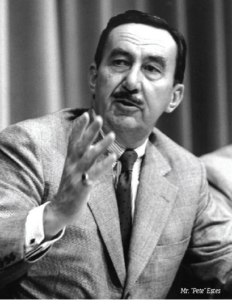 industry. Estes’ passion for machinery and “things that moved” began at a young age for the future visionary. Eventually, after graduating high school, he applied to General Motors Institute (GMI) and was assigned to GM Research Laboratories. Estes apprenticed under the founder of the laboratories, Charles F. “Boss” Kettering, a renowned inventor.

Estes left the labs in 1946 after completing four years at GMI and two years at the University of Cincinnati where he earned his degree. He took a job as a motor development engineer at Oldsmobile. There he had the opportunity to work on the famous Olds Rocket V8 engine, the industry’s first compression engine. He advanced through several promotions to an assistant chief engineer at Oldsmobile.

Estes was elevated to general manager of Chevrolet in 1965. During that year, Chevrolet built three million cars and trucks, the first single manufacturer in history to accomplish that in one year. After Ford debuted its very successful Mustang, Estes countered with the Camaro. The iconic car became and has remained one of America’s most popular production line sports cars. It is one of the many accomplishments that have etched Estes’ name in the history books.

A local celebrity in his own right, Bill Estes, president of the Bill Estes dealerships located in Central Indiana, shared memories of his father and the fateful night around the family’s dinner table when the car was dubbed with its illustrious name.

“I came for dinner one night, and it was just my mother and [me]. My brothers had gone away to school, and my dad pulled this piece of paper out of his pocket and said, ‘We’ve got to name this new little car that’s coming out,’” Bill said. “He had three names listed on this piece of paper, and he showed it to my mother and [me]. My mother liked the name Camaro that was listed and asked my dad what it meant. He replied that it meant a warm, friendly friend, and she said, ‘That’s it. That’s a perfect name.’ Months went by before we realized that the car had actually come out and was called the Camaro, so that’s how it started.

“Chevrolet was losing some market share in the sports car area when the Mustang came out, and so my dad and his people identified the need and decided that they needed to bring the Chevy Camaro out. It has outsold the Mustang for many years, and it does have an unbelievable heritage.” 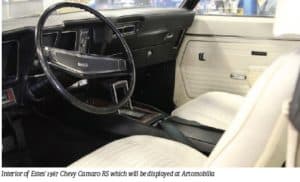 Bill himself has kept four Camaros in his personal collection, one for each of the years that his three children were born and his father’s beloved 1967 Chevy Camaro RS.

“I’ve always loved those [Camaros],” he emphasized. “It is just a great car. I do have my dad’s car. This will actually be on display at this year’s Artomobilia. He bought it as a company car and kept it. When he retired in Arizona, he kept in out there. Sadly, he drove it to the airport the day that he passed away. It was a favorite car of his to drive all of the time. People thought that he would have driven a Cadillac or some other big car, but he loved to jump in that old Camaro and drive it.”

Pete also owned the one and only Chevy Camaro SS Convertible. Bill told us that he found his dad’s car but gave it a pass when he saw the opening bid on the Mecum auction page.

“My dad did have the only SS convertible that was ever made,” he confirmed. “It was a company car, and the engineering department made it for him. Those company cars are usually torn apart and sold as a ‘normal’ car and not as a design car. Eventually, somebody bought it and reconstructed it as an SS convertible. One day, an associate called me and said that I ought to buy my dad’s old car that was in a Mecum auction in Illinois, so my CFO and I got online to look into it, and the opening bid was $560,000.” Bill paused and then resumed. “We promptly hung up the phone. At least I know that the car still exists, and there is a title with my dad’s name on it.”

Bill spoke about his dad with great pride and respect. The close-knit Estes family was supported by a devoted and caring father who was also an American innovator and brilliant industry leader. Bill shared a light-hearted story that displayed the bond and respect that the young Estes had in his teenage years for his father.

“I owned a baby blue Pontiac Tempest with small hub caps in those days,” Bill recalled. “You’d never know that it was a hot rod and that I had slicks in the back in the car. One Sunday morning, I decided to go to the local race track and drag it, just to see what it was like. I went down there, and they put me in whatever class they put me in because it was ‘just a stock Tempest.’ I went about 20 mph faster than everyone else, so I came back around and got in line, waiting to go again.

“I got out of the car and was standing and talking to a couple of people. I looked across the race track into the stands. There was only one person sitting in those stands. It was my dad. I got into my car, stopped at the church, took off the slicks and put them in the trunk. I went home, and never was there a word spoken [about it] between my dad and [me] after that. I enjoy telling these stories about my dad. Looking back at it all, it’s pretty neat. He was an industrialist and an innovator. I am obviously very proud of him.”