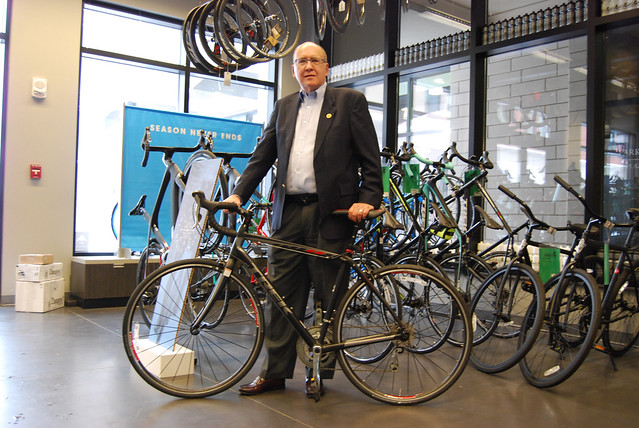 We are well into the first part of the new year, and while some people have hit the ground running, one of our newest city councilors representing the central district of Carmel, Bruce Kimball, prefers to pedal his way forward.

Kimball was raised in a small town – Lebanon, Ohio – where both parents were school teachers and active in the community. Kimball graduated from Hanover College with a major in geology and business. He was involved in multimillion dollar contracts and sales of oil drilling equipment prior to the price collapse of the U.S. oil industry in the mid-1980s.

Afterwards, Kimball and his family moved back to the Midwest and to Carmel where new opportunities awaited him.

Volunteering as a youth coach for the Carmel Dads’ Club, serving his church in leadership positions and volunteering for over a decade at the Carmel Farmers Market, Kimball has been a dedicated public servant long before deciding to run for a political office. Kimball was a founding member of the Carmel City Center Community Development Corporation (4CDC) and is a Republican precinct chairman.

“I grew up in a small town and not too dissimilar to what Carmel looked like when I first moved here,” Kimball recalled. “My parents were a wonderful example for me as they were involved in many capacities in our community. After my son went away to college, I began volunteering more and met my mentor, Ron Carter, at the Carmel Farmers Market. He epitomized what I feel a politician should be, a person who is visibly engaging his or her community while making a difference. Buildings build a city, but it’s people who make a community.”

Looking to engage his community while feeding a personal passion, Kimball founded the bicycling group Carmel Pedals a few years ago. His idea was to engage novice and seasoned cyclists and enjoy some of the 176 miles of paths and trails established throughout Carmel.

Kimball has organized bike rides, and now through his association with the owners of Bike Line, Jimmy and Bill Revard, they have developed another organized ride that gathers in the City Center development along Rangeline Road. The group congregates at the Bike Line shop every Thursday evening when the weather is more conducive and the time change occurs in the spring. Carmel Pedals meets on a regular basis until their last ride in the fall.

“We use the bike ride to expose people to riding in general but also to riding in a group atmosphere,” explained Jimmy Revard, co-owner of Bike Line. “There is safety in numbers when you’re on the road, and most people feel more comfortable riding with 10-20 other bicyclists. It is also a way to encourage people to create groups and rides on their own.”

Kimball utilizes social media to communicate to his group and to promote Carmel Pedals. “We have a Facebook and Twitter account for Carmel Pedals to engage and inform the public about our rides and other pertinent information,” Kimball said. “We ride 10 miles on the Thursday rides and encourage the beginner and the seasoned bicyclists to enjoy the paths and trails along with us. 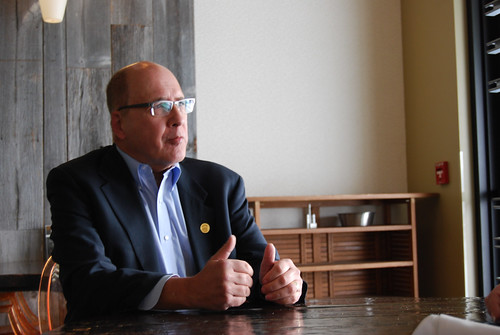 “The local bicycling trend is definitely on the rise. On Saturdays during the Farmers Market, we will see anywhere from 200-600 bicyclists, and that is simply phenomenal. We probably have more bicycles per capita than any place in the state. My goal is to encourage more people to get out riding and using our paths and trails. It is obviously great for one’s health and another way to create fellowship.

“I’d like for Carmel to follow in the footsteps of places like Boulder, Austin and Portland with regards to their pro-bicycling philosophies. With the completion of U.S. 31, people will be able to bike to work with more ease and safety. I will work with my fellow city councilors to encourage local business to provide bicycle infrastructure such as parking and showering facilities for their employees.

“The businesses located along the Monon Trail have already and will continue to take advantage of their prime real estate. Many of the newly constructed projects along the trail will have their tenants’ facades facing toward the trail to attract the trail-goers and maximize their visibility to potential customers.

“The support that we have received overall from the businesses and fellow bicyclists speaks volumes. Bicycling has a hugely positive economic impact to the community. It improves connectivity and creates demand in the residential and commercial real estate sectors of our community. It also helps our brick and mortar stores. People purchasing and maintaining their bicycles at a local store will receive a better personal shopper experience and overall more customized product than they would buying a buying from a big-box store.”

Upon being elected as a Carmel city councilor, Kimball plans to use his position to continue and expand upon his advocacy of bicycle safety and awareness to residents and guests of the city.

Kimball and his colleagues are in the preliminary stages of developing a bicycle safety program that they would like to roll out this coming May which is “Bicycle Month.” The safety program will be geared toward educating bicyclists and motorists, alike about the laws of the road such as the “3-foot rule” and to encourage the “Share the Road” philosophy.

“Having been in council for a little over a month, I have received a lot of support from my fellow councilors,” Kimball expressed. “I really have Ron Carter to thank, we all do actually, along with the Mayor and a group of core people who developed our trails and pathways. When I first arrived to Carmel, we had a few multi-use paths, and now we have 176 miles of them. I’d like to continue upon their success and implement the bicycle safety program, so that our residents and visitors may use these paths and trails safely.”

Proving to be a successful revenue-generator for the city, the bike sharing program through Zagster should gain even more traction this coming spring. Kimball feels that even more people will want to register and become part of the pedaling pack.

“We’ve got approximately 2,800 people registered through Zagster here in Carmel,” Kimball said. “Local companies and organizations are coming on board and sponsoring bike racks such as the Hamilton County Visitors’ Bureau and local hotels. We have bike sharing racks located throughout the city, on Main Street, the Monon Center, Clay Terrace, City Center and the Clay Township Municipal Center in Home Place, and we are looking to expand across U.S. 31 in commercial areas as they become available.”

Kimball concluded, “Our city is leading the pack in cities nationwide in so many areas. It is a fantastic place to live, work, play and retire.”