One of Music’s Most Iconic Nights 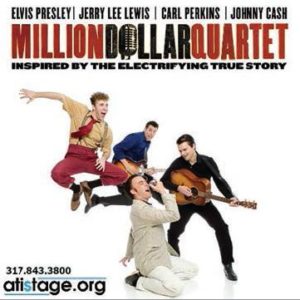 “Million Dollar Quartet” tells the story of these four young musicians who gathered at Sun Records in Memphis for what would be one of the greatest jam sessions ever. Bringing this legendary night to life, “Million Dollar Quartet” features a score of classic rock chart-toppers, including “Blue Suede Shoes,” “Matchbox,” “Who Do You Love?” “Hound Dog,” “I Walk the Line” and many more hits.

ATI Co-Founder and Artistic Director Don Farrell will be playing Sam Phillips in this production. Farrell portrayed Phillips in ATI’s Indiana premiere of “Million Dollar Quartet” in 2016 and shared his thoughts on this season’s upcoming production.

“Our 2016 premiere blew all of ATI’s records as far as box office draw,” Farrell said. “We made the mental note back then that we needed to bring this production back. D.J. Salisbury, who just recently directed our hit production of ‘The Mystery of Edwin Drood,’ directed ‘Million Dollar’ for us in 2016 and is back to remount it for us.”

Farrell explained that most of the original ATI 2016 cast of “Million Dollar Quartet” has returned for this June’s production.

“Brandon Alstott, another local favorite, is reprising his role of Johnny Cash. We have our drummer, Nathan Shew, who audiences have seen at Beef and Boards occasionally. Nathan was Fluke Perkins (Carl Perkins’ brother) in the 2016 production and is coming back. And we’ve got Kroy Presley out of North Carolina, and he is actually related to Elvis Presley. He plays Jay Perkins, a Slap Bass player. Kroy’s been playing in the show around the nation.

“We’ve got a great guy, Gavin Rohrer, who’s played Jerry Lee Lewis many times, and when he sent in his videotape of him playing, I was like, ‘Holy cow, this guy is on fire.’ He’s amazing. Sean Riley is playing Carl Perkins and just came straight off a production that he did out west. All these actors are unbelievably talented. Anybody who had seen our 2016 production will not be let down by this production by any stretch of the imagination.”

Farrell offered up some history on his character, Sam Phillips, who is attributed as being the man who “invented rock and roll.”

“Sam discovered not only Jerry Lee Lewis, Johnny Cash, Elvis Presley and Carl Perkins but Ike Turner, Roy Orbison, and the names go on and on,” Farrell stated. “Sam discovered so many people, and he ran a small two-person operation back in the day. Sam’s big thing when he discovered these guys was trying to always find the unique individual natures of everybody.”

According to Farrell, Phillips opened up Sun Records, down in Memphis, Tennessee, to anybody as long as they had the money to lie down a track. He’d record it for them on a 45 rpm record. The story goes that a young Elvis Presley, living in Memphis, wanted to record a song for his mom for Christmas. He went to Sun Records and recorded tracks for his mom. Afterward, Phillips and his assistant, while searching for a “new sound,” brought Presley back to the studio, and the rest is history.

“Sam drew Elvis’ unique sound out of him,” Farrell said. “He had a famous saying, ‘If you ain’t doing something different, you ain’t doing nothing.’ He [Sam] was able to push certain buttons with these artists to bring out the unique individual nature with every one of them.”

Farrell, the ATI board and staff would like to thank their title sponsor, Cate, Terry and Gookins, LLC, 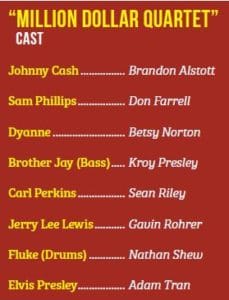 and their season sponsor, United Fidelity Bank. He also thanked the City of Carmel, Pedcor Companies, the Carmel City Council, Mayor Brainard and The Center for Performing Arts for their continued support of ATI.

ATI is a professional, not-for-profit theatre organization of local and national artists dedicated to excellence in theatre production for a diverse patron base in Carmel and central Indiana. Actors Theatre of Indiana enriches the culture of the community and uses theatre as a tool for educational engagement.