Those of us who were raised here in Carmel remember the stories about when the city was a town once known as Bethlehem. With the holiday season upon us and the New Year fast approaching, we thought we would take a quick trip back in time before the evolution of Carmel and see what life looked like in the 19th century when it was the little Town of Bethlehem. 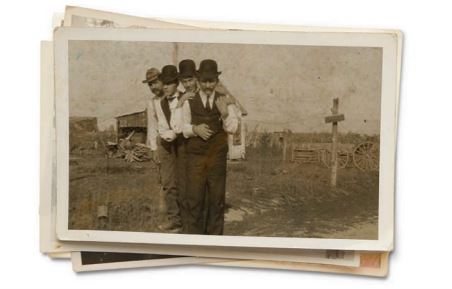 The story goes that John Felps (Phelps), Alexander Mills, Seth Green and Daniel Warren platted a total of 14 lots that had previously been inhabited by the Delaware Indians and then became inhabited by Quakers. The plot first established in Bethlehem is marked today by a clock that was donated by the Carmel Rotary Club.

The town’s first General Store was constructed in 1837, and the first framed schoolhouse was constructed in 1845. The town’s first Post Office was established in 1846, and soon after, the United States Post Office notified the town residents that another town in Indiana had already been registered by the name of Bethlehem. As a result of this finding, a referendum vote of 33 in favor and 12 opposed decided to officially incorporate and adopt the name “Carmel” in 1874. The town had a population of just fewer than 500 by 1900.

“The original 14 lots surrounded the intersection of Main Street (Range Line Road) and Main Cross Street (Main Street),” shared Andrew Wright, researcher at Carmel Clay Historical Society. “Bethlehem was one of several small communities carved out of the dense forest, which was home to all manners of wildlife, including bears, wolves and cougars. A sulfur spring blanketed the north edge of town in fog, giving Smokey Row Road its name. The marshes and swamps to the east led some to nickname the town Tadpole’s Glory. One of the earliest gathering spots was the gristmill at Mattsville (116th Street and Haverstick Road), where farmers talked politics and gossiped while boys raced canoes and fished in Cool Creek. Mulberry Corner (Westfield Boulevard and 116th Street) was another. It was a small community that grew around the McShane property and became a travel stop on the road to Indianapolis.”

Life for the early residents of Carmel was lived piously, and the holidays were celebrated much more subtlety and privately among families. Gifts were handmade and usually more practical and utilitarian in nature rather than lavish and with the sole purpose of entertainment.

“The settlers made most everything themselves, but some goods were purchased from foot peddlers that passed through town,” Wright explained. “A dry goods store operated by Boggs & Boggs opened on the southeast corner of town around 1835. A tanning yard opened on the southwest corner a couple years later. Residents were members of the Richland Meeting on the northeast corner of town or the Methodist Church in the southwest. Children attended subscription schools in log cabins for several decades until public schools were opened in one-room frame buildings in districts throughout the township. By 1874, the town had grown to 26 lots. That year, residents of Bethlehem presented a petition to the county commissioners to incorporate the town under the name of their post office. Bethlehem had been a quiet hamlet noted for its many shade trees, but big changes loomed on the horizon for Carmel with the coming of the railroad.”

As Carmel continues to evolve, it is appropriate to pause and appreciate where the city has come from and honor its humble origins. One can only imagine what the history books will chronicle about the City of Carmel over the next century or two.