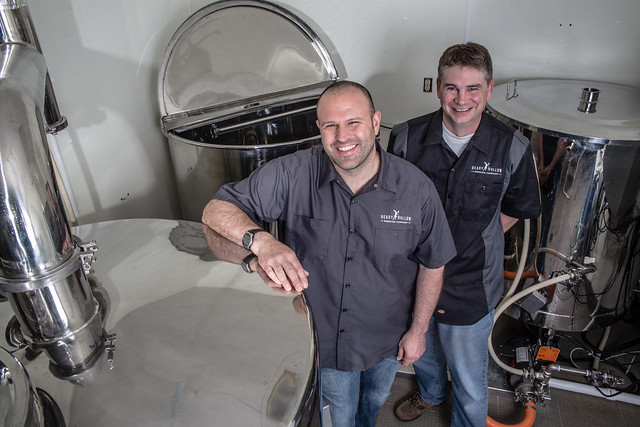 More and more Indiana microbreweries are making plans to move north to tap into growing communities, such as Fishers, Carmel and Noblesville! Some are open now, and others are set to open soon.

Heady Hollow Brewing Company partners Keefe Pietri and George Garrison are opening a brewpub at 11069 Allisonville Rd. near the low lying “Heady Hollow” area. The two have been brewing since 2008 and are known for their unique “coffee pecan porter” brew.

The new facility will have a five-barrel brewing system that visitors can view through a large window, a patio and family-friendly restaurant space. They will also offer some other local brews such as Scarlet Lane.

Scarlet Lane is a brewery in McCordsville, 7724 Depot St., that is already up and running, offering some crowd favorites such as the Dorian Stout and the Lordy Henry Summer beer.

Kevin “KP” Paul, owner of Brockway Pub, 12525 Old Meridian in Carmel, officially opens Danny Boy Beer Works in the Village of WestClay. The brewery features nine house beers from a 15 barrel system that sits in the middle of all the action, so guests can hear the workings of a brewery for some great atmosphere!

Indianapolis-based Sun King Brewing wants to expand its presence by opening a tap room and small batch brewery in the Fishers area.

The 6,000-square-foot space at 7848 E. 96th St. in the North by Northeast Shopping Center will be home to a three-barrel brewing system and a special event space for community and private events.

Sun King, just five years old, is Indy’s largest craft microbrewery and the second largest in the Hoosier state.Named after preferred growing regions for hops, 48th Parallel Brewing Co. is planning to open in the heart of Fishers, but no schedule has been announced at this time.

Jason Wuerfel opened Books & Brews in the Fishers area at 9402 Uptown Dr. It’s a unique concept mixing brews with food and a quiet spot to read a book.

Head up to the Union Brewing Company at 622 N. Rangeline Rd. in Carmel where you will find artisan ales handcrafted two barrels at a time.

Or you can visit Upland Brewery, 820 E. 116th St. in Carmel, where you will find 10 draft lines and rotating seasonal selections.

Another unique concept in breweries is the Flix Brewhouse, 2206 E. 116th St., Merchant Square Shopping Center, in Carmel, where they offer first run movies and well crafted beer! There’s 12 onsite brewed beers and more than 20 regional craft selections for guests to enjoy with or without a movie in the restaurant area.

So whether mixed with books, movies or standing alone, the craft beer industry shows no signs of slowing down, especially here on the northside!