If you’ve ever had a problem with your laptop or other device from thermostat to smart TV and security systems and had no idea where to turn, there is good news. NerdsToGo has opened shop in Hamilton County.

Temporarily located at 13295 Britton Park Road near 131st and State Road 37 in Fishers, NerdsToGo franchise owner Walt Brown is looking forward to his move to Fishers Marketplace right next door to Stacked Pickle in a very high traffic and accessible location. And he’s also looking forward to continuing to provide the best IT service in the area. 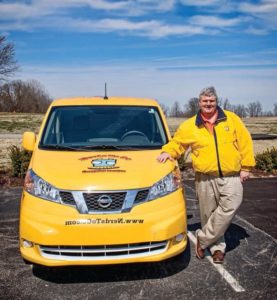 Brown has a 25-year background in accounting, business administration and IT. He’s one of those people that got started in IT before most people knew what IT was. There were no schools, training or degrees in such things then; he learned by doing.

When Brown discovered that he was going to be part of a workforce reduction at his place of employment he decided not to let that happen to him again. He turned to a career coach who administered a test and determined that being a business owner might suit him best. “I was 98 percent entrepreneur. The 2 percent I didn’t have was the nerve to do it, taking that step and putting money at risk. Once I got over that, I did it,” said Brown.

What he did was discover an up-and-coming franchise called NerdsToGo and visited its corporate headquarters in Connecticut. The company has been in business for 15 years but just began franchising in 2017. Although starting a franchise was not originally on his radar, Brown liked what he saw and felt it was a good match, so he started the first NerdsToGo franchise in Indiana in December 2017.

The business focuses on residential and medium-size businesses. “We offer a wide variety of technology services. It’s everything from networks to PCs to anything electronic,” says Brown. NerdsToGo will do a lot of things that other IT businesses will not. “We’ll fix cell phones. We’ll come in and help somebody set up a smart TV. If you want to do a home theater, we can assist you with that. Do we know and do everything? No, but we can assist you in finding those resources,” he says.

Brown says not everyone needs professional help to upgrade their own computer, but there are other areas that homeowners could use his services. “Are you getting into the home technologies? Are you getting your thermostat online? Are you putting in a security system for your doors and windows and garage doors? Are you monitoring your appliances? All those things are out there,” he says. “We’re here to assist you with that.”

Besides having a flat per incident rate rather than an hourly fee, NerdsToGo also offers low-cost residential agreements for as little as five hours of service, and the agreement never expires. If you bring your device into the shop for diagnosis and repair, the rate is lower. But all diagnostic fees, which are low, are waived if the customer has the work performed.

On the business side, NerdsToGo works with companies that have IT people and those that don’t. “We can be your IT department. We sell service agreements in which you can buy a package of time, or you can buy monthly where you buy so many hours a month,” says Brown, adding that some businesses need a few hours every month and some just need something every few months. NerdsToGo has a package to fit every need.

Small Business Administration data shows that 65 percent of all businesses spend five to six hours every week trying to resolve a technology issue, which results in downtime and loss of productivity. For businesses that have a regular need but do not want to hire someone to handle IT issues, NerdsToGo can fill the void.

Brown thinks there are several things that set his IT service company apart from others. “It’s how quick we get to people. It’s convenience. It’s value.” Brown says that while other companies might take a week or more to get to you, NerdsToGo will get there quickly, especially in an emergency situation. “We’re very responsive to our customers. Everybody else is, ‘You have to work with us,’ but we work with you. I think our quick response is one thing that really sets us apart from everybody else,” he says.

He also points out that technology changes rapidly, and keeping up with it can be a challenge, which is why being a part of a large national company is very beneficial. “We have a good network of support behind us. We’re able to get answers quickly. I will never tell you my techs know everything. My techs are good, but they have the quick ability to get the answers,” he says. “We try to be upfront and honest in a friendly way. That’s one thing we’re complimented about is how kind and courteous and nice we are,” says Brown.

He says service is the biggest factor. “Being part of the technology world for so long, it’s just like any service: People need to be able to trust who they are dealing with,” he says. “I think our flat rate pricing sets us apart from everybody else. I think the convenience that we have sets us apart. I think we add value because our pricing is reasonable and straightforward.”

Brown says his company will partner with Apple soon, and all techs have a minimum of A+ computer certification training.