The Community Relations and Economic Development Department was established by Mayor Jim Brainard to manage and facilitate the public communications and economic development of the City of Carmel. Sitting at the helm as director of community relations & economic development at City of Carmel is Carmel resident, Nancy Heck. Heck is celebrating her twentieth anniversary as the head of that department which began as a department comprised of only one, that being Heck. As the city grew, the demands of Heck’s position also grew resulting in Heck developing a department over the years and a steadfast team that has assisted her in weathering a litany of storms and celebrating many successes over the last two decades. 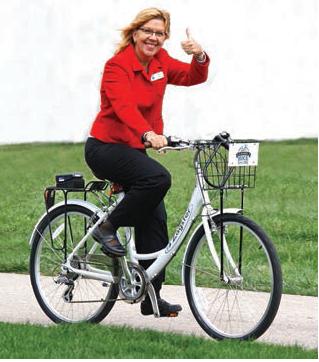 Heck explained that prior to her hiring, the mayor’s office did not have a PR or communications department but it had come to a point that it needed a PR person to assist the mayor in crafting his messages and getting them out to community; keeping the residents and businesses comprised to the plans that he had.

“Communication is key with telling people where do we want to go, how are going to get there and why it makes sense to do it a certain way,” Heck said. “The city’s growth was well underway when I came on in March of 1998. The city’s attorney, Doug Haney, was the only one and he welcomed the offer to help. I used my law degree and I would do court on Mondays. I would take the cases home, work over the weekend and come in to court on Monday and did the PR stuff the remainder of the week.”

Heck’s background in law, journalism and public relations has given her the advantage to look at various situations from many perspectives throughout her career with the city.

“I think that my background helps when we [the department] try to write our story,” she emphasized. “I hope that the journalists who work with us know that we are being extremely diligent when somebody comes out with a number or a statement. I’m always like okay, how do we prove that? Where do we go to prove that? It’s helpful to have that background because the city attorney isn’t’ always at your beck and call. The mayor’s also an attorney, though he doesn’t practice, but we talk the same language.”

Heck shared that it’s always been a challenge with tax payer money hiring additional staff as the city has grown substantially over the years to support the menu of programs and events that the city offers residents, businesses and tourists.

“There is always much to be done and the media responses along could take up to two people,” Heck stated. “There’s never a loss of things to do. Currently, we have five full-time and one contract employee. There is an important component to city events. I think that people sometimes think that we just throw ‘parties’ and they may not understand that there is a reason for what we do. People volunteer to attend these events and meet other people with like-minded interests and they engage in the community. Employers want to have things for employees to do. They can’t attract people to a cultural and entertainment desert. You have to have cultural and community engagement.”

Over the last two decades, Heck has attended countless ribbon cuttings, grand openings, city events and other civic related events as part of her position but is also a proud resident of the city in which she serves. Heck has been a long-standing member of the Rotary Club of Carmel and regularly volunteers at Orchard Park Elementary in the media center. Heck also assists with the Carmel Clay Public Library as part of her passion for advocating for literacy.

“In regards to projects that I am most proud to have been a part of over the years, and not necessarily in chronological order, I would say that the Center for the Performing Arts has to be the absolute gem,” Heck said. “That was a long fought battle from the very beginning. I was lucky enough to be on the original board along with the mayor and Doug [Haney]. Creating a sustainable civilization is more than just being green-it’s about having cultural amenities. The mayor doesn’t think only 10-20 years down the road. He thinks 100-years and more. We had the daunting task of educating the community why the Center was important. It was a true grassroots effort that involved me answering questions in front of large gatherings of people, both supporters and non-supporters, who filled our council chamber at the time.”

Heck explained that even before the Center, the Arts and Design District, City Center, Keystone Avenue, Monon Trail and the other major projects took place, the city knew the importance projects like these have on attracting businesses.

“Even way back then, we knew that using the arts as an economic development tool would also set us apart,” she said. “We have built a city where our children, who got to enjoy the Monon Greenway and water park, want to grow up and live and raise their own children. In my wildest dreams, I would’ve never thought that I’d be a part of the things that I have been. The addition of the Christkindlmarkt and Ice at Center Green are two of the most recent successes. I told the mayor that we’d know if we were successful if two things happened; if people get engaged there and if Christmas card pictures are taken there. Both happened and somebody got married there so that was a bonus. Knowing that’s where people want to have memorable iconic moments is such icing on cake. The Christkindlmarkt and Ice at Center Green were thought provoking and they took a lot of diligent work, much like many of the city’s projects.”

Heck concluded, “I’ve been very lucky to have just oddly landed here. I have to thank the mayor for seeing something in me that I didn’t even see in myself and to trust that we could go on this journey together. To be able to leave a legacy is what people live for. I don’t measure success in dollars but rather did you make the world a better place? For me, the answer is yes.”