Modernizing the Mansion for a New Era

Built in 1940, the mansion was physically relocated in 1991 to its current location nestled among the scenic, wooded 10 acres along 116th Street and Hazel Dell Parkway. If the walls of the southern-influenced mansion could speak, they would tell the tales of countless celebrations and momentous occasions for many members of the Carmel community.

The estate was purchased in early 2016 by Thomas Caterers of Distinction, a second generation operated and owned company that is nationally renowned for its services. Founded by Susann and Timothy Thomas in 1983, the couple owned an upscale restaurant in Indianapolis, prior to their catering company, that was destroyed by a fire. From the literal ashes, the Thomases sought the opportunity to put their efforts into upscale catering and in its first year of operation, the company hosted about 50 events. Today, Thomas Caterers of Distinction is under the ownership and direction of Susann Thomas’ daughter, Kelly Early and her husband, Vince Early, and has grown to handle nearly 500 events a year.

Thomas Caterers of Distinction specializes in custom event planning. Every detail from transportation, audio visual, florals, entertainment, décor and menus are meticulously devised by the company’s certified event planners and is the only caterer in the state to have Certified Special Event Planners (CSEPs). The CSEP designation is earned through education, performance, experience and service to the industry.

Kelly Early, owner, reflected on her family’s journey over the decades and the decision that led the company to purchase and renovate the historic Mansion at Oak Hill in Carmel.

“My mom and step-father moved up here from Florida and opened their restaurant in 1980,” Early said. “Nearly four years later, the restaurant caught fire and burned down. Throughout that ordeal, they were catering for influential people in the city. By the time that it was all settled, they decided to continue on the path that they were on. We always say that the company was like a phoenix. Out of the ashes, came our destiny.”

Another act of fate occurred when Vince Early, who attended Scecina Memorial High School with Kelly, began working for the Thomas family during his freshman year. The two became friends and eventually began dating. They would later marry and when Susann Thomas retired in 2000, Kelly stepped into her mother’s role and Vince became the Director of Sales.

Kelly Early explained that at that time, the event market began to evolve from venues having a list of preferred caterers to going into exclusive agreements. The Earlys realized that they needed to “play the game” so they went into their first exclusive catering agreement with the Scottish Rite Cathedral in downtown Indianapolis in 2002 and remain the venue’s exclusive caterer.

Forging their own destiny, they opened D’Amore Events, located on the 48th floor of the Chase Tower on Monument Circle, and CANAL 337, located on the north end of the Central Canal on W. 11th St. The company is also the co-exclusive caterer to the Indianapolis Central Library. Keeping their eyes open for an opportunity in Carmel, the couple was interested in opening a venue in the growing city but had to make sure that it was the right property, at the right location, at the right time. Just two years after opening CANAL 337, the Thomases purchased the Mansion at Oak Hill. The eleven-week renovation began in January of this year. After a massive remodeling of the entire building, interior and exterior, the Black Iris Estate has been hosting elegant weddings and special events throughout the summer.

A tour of the mansion reveals high-end finishes and fashionable décor that makes each room brilliant and breathtaking. The foyer boasts the original grand 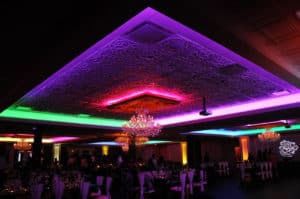 staircase, adorned with a collection of ornate mirrors that accent the curved stairwell. Upstairs, bridal parties are provided their own suites for the bride and the groom. The groom’s suite is tastefully decorated with masculine themes and is complete with a foosball table to entertain the gentlemen while they await the bride and her bridesmaids. Across the hall is the bridal suite, a suite truly fit for royalty. A lavish suite provides the ladies with an extravagant full-length mirror and is appointed with exquisite lighting fixtures, décor and other remarkable amenities.

Downstairs the Thomases are planning to add an extension to the west wing of the mansion that will be known as the “library”. The projected timeline for this addition is 2-3 years. The addition requires extending the structure beyond its current footprint.

The jewel of the Black Iris Estate is irrefutably the grand ballroom. Approximately 7,000 square feet, the transformed ballroom boasts modern technology while drawing in its guests with a jaw-dropping, visual feast of unparalleled splendor. The custom crystal chandelier, created by Kelly Early, acts as the room’s centerpiece. The ballroom is outfitted with a Phillips Hue wireless LED lighting system and can seat 400 people without a dance floor or 350 with the dance floor installed.

The entire mansion is outfitted with a Sonos HiFi wireless sound system. Vince Early elaborated on the system’s capabilities. “Every room in the mansion can be zoned differently,” he said. “We can play one set of music in the hall, another set of music in the groom’s room and so on. We have built-in projectors on either end of the ballroom, complete with the necessary accessories for people to run presentations with our in-house media. We also have a couple of audio visual companies that we use for larger scale entertainment needs. We also have exterior speakers for outdoor ceremonies.”

The Black Iris Estate utilizes every square yard of its grounds, providing brides and grooms with outdoor ceremony locations. A bounty of photo opportunities decorates the wooded property behind the mansion, including a swing, bridges and a massive wrought-iron gazebo.

Kelly Early emphasized the importance of preserving the mansion’s character and the grounds that surround it while they renovated and continue to enhance the property. “Our goal is to provide different opportunities for our guests throughout the grounds,” she said. “There are a variety of areas for incredible photo opps. We make memories here and we have to preserve them.”

“It [the remodel] was the hardest thing that we’ve ever done but it is turning out to be the most rewarding,” Vince Early emphasized. “As spectacular as our other venues are, the Black Iris just takes it to a whole new level. All of our venues are so vastly different and that’s by design. The Black Iris is a beautiful venue. The bones were already here and the character of this building just doesn’t exist anywhere else. We feel that we’re breathing a new life and era into this mansion and building new memories.”