They say “all good things must come to an end,” and that came true for three teachers within the Carmel High School Performing Arts Department. At the end of the last school year, Mrs. Ann Conrad, Mr. Lamonte Kuskye, and Ms. Diana Gillespie all left their positions, with legacies of awards, tenure, and students’ lives being changed. As school begins, we will see a changing of the guard that will maintain the history of excellence and bring fresh ideas to propel the choirs to even more successes. 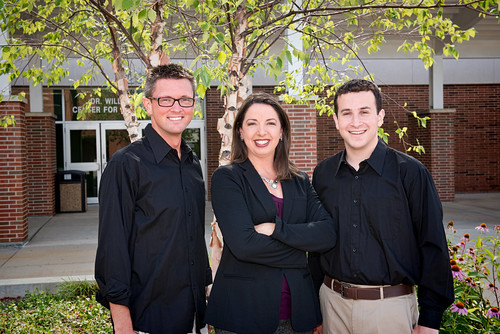 The newly appointed Director of Choirs, Ms. Kathrine (Katie) Kouns, brings 17 years of experience as a choral director in Arizona. After graduating from Arizona State University with a Bachelor of Music in Secondary Music Education, she went on to earn her master’s in Educational Leadership and Administration from Northern Arizona University. Under her direction, many of her honor choirs won National Championships and they performed all over the world. In addition, she has served as the (American Choral Directors Association) Repertoire and Standards Chair of Show Choirs for the ACDA Western Division and the state of Arizona. She was also named by the Grammy Foundation as one of America’s Top Ten Music Educators.

Mr. John Burlace, newly appointed Associate Director of Choirs, brings an impressive record of directing show choirs. After earning his Bachelor of Music in Vocal Education from Millikin University, he went on to earn his master’s in Educational Administration from Northern Illinois University. Known for his excellence in vocal production, choreography, instrumental performance and show design experience, his choirs have taken National and Regional Grand Championships, and John has a great passion to keep the excellence going here in Carmel High School.

The newly appointed Associate Director of Choirs, Mr. Joe Foltz, holds a Bachelor of Music in Music Education with a vocal emphasis from Millikin University. Joe has directed various choral groups, as well as freelanced as a music arranger. His work has been performed by competitive show choirs across the United States, by collegiate, high school, and community choirs.

In meeting Katie, John, and Joe, it is evident that the three actually see themselves as one. As Katie explains, “We plan on truly collaborating as a team, each bringing our own unique talent and ability. We have already discovered that we share the same amount of excitement to be here at Carmel. While we are not the same person, we all share a common vision.”

The new directors are looking forward to knowing the students from day one. Incoming freshmen will spend at least nine weeks with each of the directors in the lead-teacher position, allowing them to get used to each teacher’s individual style. That relationship will continue for the entire four years that they are in high school. Katie explains, “We want to make a large school seem smaller so we can reach out to impact our students. By staying connected to them, we hope to inspire each one of them.” She continued, “There is a sense of family here in the choral department. It’s not like other classes, where a teacher only sees a student one hour a day a couple of times a week for a year, and then they move on. We have a connection to these students because of the nature of rehearsals and performances outside of the school day. It really does become like a family.”

The new directors know, first-hand, how much a teacher may inspire a student. It was while Joe was a student in John’s class at Wheaton Warrenville South High School, that Joe decided to pursue his degree in music. Joe also followed his mentor’s steps and attended Millikin, John’s alma mater. The two are very excited to work together and share yet another bond as professional colleagues. It’s almost as if it was destined that the two work together again!

Katie and her husband relocated to Carmel last year from Arizona. After 17 years of teaching, she took this year to explore other avenues, such as teaching voice lessons, judging show choirs in Indiana and Ohio, working with the Indianapolis Children’s Choir, and professionally singing in the recording studio again. She had an association with Ann and Lamonte, and when she learned of the job opening, she happened to be in the right place at the right time. Last year was a reminder of how much she missed being in the classroom, and she is embracing the chance to have that opportunity again at Carmel High School.

According to John, “We all know the level of excellence Carmel High School has reached, known across the country. We understand that our community has come to expect that excellence and we are dedicated to continuing that legacy. We also want to challenge ourselves to bring even more to the department.” The new directors plan to expand the genres to which the students are exposed, to include multicultural, jazz, madrigal, gospel, folk, and classical.

John explains, ”It is nice to be in a community that cares and is involved. We plan to bring our own flavor to the mix, and hope to put a bit of our stamp on it. We want to expand what has been…and show other things we can do well.”

Joe adds, “I’m excited to work with these two. They are great mentors and very established in the field. It is an honor to be here and to be part of this tradition at Carmel.”

Katie, John, and Joe have been working diligently this summer to prepare for the school year. The guard has already changed and stands ready to lead Carmel High School students to reach their full potential. Get ready to be impressed with even more dazzling choral performances. It’s going to be a great year!